cambreaKer
Posted 3 months ago2022-03-07 21:32:59 UTC in Textures are magically changing when exporting maps? Post #346332
yeah, the random texture tiling is also really broken on opengl renderer, so you just have to rip the individual textures from halflife.wad and remove the special flag from the names of the textures and put them into your own wad. or just use a different texture for those walls

i should have the map ready by the 21st

Name: cambreaKer (my actual name is gonna be a mystery

)
Age: 15
Hometown: born and used to live in Poland, but since 2015 i live in Germany
Relationships: nope
Occupation: school
Current goal(s): finishing my Half-Life: WAR mod and a crappy little game i'm working on in FPS Creator

maybe even actually learn C++ one day haha
Politics: not interested at all
Religion: used to be a Christian (sorta) but nowadays i'm not religious

Food: pizza, spaghetti, the good ol' schnitzel's, and lasagna. also, cheese - if The Core won't have a cheese vending machine it's gonna be a 1/10 from me

Hot drink: tea, preferably mint tea, that stuff's great
Cold drink: cola
Snacks: chips, mostly Lay's sour cream & onion, those are great
Movies: ehh i watch movies very rarely, so i can't really say what's my favourite one.
Videogames: definitely FPS games. Half-Life, Counter-Strike, Delta Force, Timesplitters, Call of Duty (the old ones) and even crappier games like Terrorist Takedown and Code of Honor hold a special place in my heart. i also like third-person-shooters, like Max Payne or the GTA games.
Music: i like various genres, rap, hip-hop, pop and some other ones. i also for some reason really like listening to game OST's really often
Other: modding games, mapping and even making crappy little games sometimes. i really enjoy mapping in particular, especially mapping for Goldsrc engine games. i've also made quite a few games, mostly with FPS Creator, sadly most of my early work is lost but maybe that's for the better

Food: mortadella, that stuff sucks.
Hot drink: can't really think of that from the top of my head
Cold drink: not sure 'bout that one either
Snacks: gonna have to do some hard thinking about that one
Movies: like i said, i watch movies very rarely, so not sure #4
Videogames: i don't really like strategy games, i liked C&C but others, not so much.
Music: "mumble rap" songs, that stuff is just horrible
Other: that one store from which i bought hl2 goty edition back in 2013 and it turned out to be a friggin' used copy and i couldn't play it!

cambreaKer
Posted 1 year ago2021-01-26 19:31:19 UTC in The mods that never were Post #345281
i had 2 abandoned mods - some people might know the first one, Half-Life: Wall (not War). which was just almost the worst mod i've made. so let me start, Wall was a mod i was trying to make back in January 2015 when i was 9 years old, and the idea of the mod.. well i don't really remember what i was trying to do with that mod, aside from lots of breakable walls. the story was really basic, there was some training hologram thing, and one time it broke so the hologram rooms became real somehow. it was a really stupid story, i was 9 after all haha. i released a shitty 1 level demo of the mod and didn't feel like making more levels so i cancelled it. the mod got really negative reception and for a good reason, it was really bad. the entire level was basically a fullbright corridor with breakable walls, monsters and weapons. unlike the 2nd mod, this mod's page on moddb still exists and you can play it if you REALLY want to.
now for the 2nd abandoned mod, "Half-Life: Generations", the worst mod i tried to make. it was a shitty beta mod that i started to "make" right around March 2015. the idea of the mod was that you could play as the "Ivan the Space Biker" from the HL alpha in the retail levels with alpha weapons and stuff, and you could play as Gordon from the final version of HL in the alpha levels, with retail weapons and stuff. it was kind of a bad idea, and even worse was the mod's page, on the description i said "i need mappers, coders, modellers, etc." which basically meant "i need someone to do all the work for me." my 9 years old brain didn't know that was a REALLY bad thing, and then i stole some shitty beta weapons pack addon for hl1 and it all became a huge trainwreck, so bad that later i contacted moddb to delete the mod page. and that's it, the story of my worst & abandoned mods.
i took a long break from modding HL until 2018 when i started Half-Life: WAR, which is a mod i'm still making and i think it's shaping up really well (don't worry, there i'm not asking anyone to do the whole mod for me lol)

I'm not 100% sure but I think I read somewhere the Vort gameplay was originally a bonus mode in PS2's HL: Decay?

yup, i have the ps2 version and there is a bonus mission in decay where you play as a vortigaunt, also there's a cheat code in that version that allows you to play through the HL1 campaign as a vortigaunt, that was an awesome bonus.

cambreaKer
Posted 1 year ago2020-07-28 04:49:49 UTC in Would ya'll be interested if I uploaded my CSCZ: DS .FGD file onto the site? Post #344578
yes, there are some custom maps released for CS DS, even the developers made 2 custom maps after the release of the game.
most are available in game banana

cambreaKerProfessional HDTFer
This post was made on a thread that has been deleted.

It has to be at least 16 units away from any walls on the x and y axes I think?

That fixed the issue! Thanks!

cambreaKer
Posted 2 years ago2020-04-16 18:27:00 UTC in Some items disappear when i test my map Post #344121
Admer456 The boxes are a world brush, i might try to make them func_detail.
Dr.Orange I tried placing the ammo further away from the neighbor crate, still doesn't work 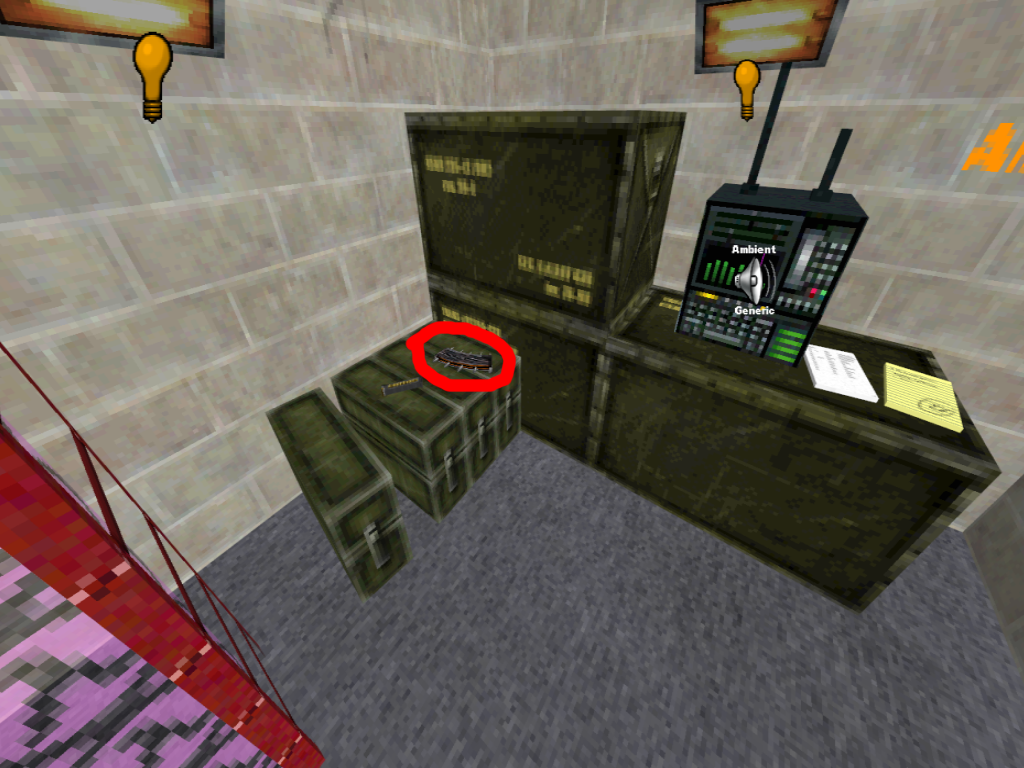 editor
And here's a screenshot in-game, the crossbow ammo is gone 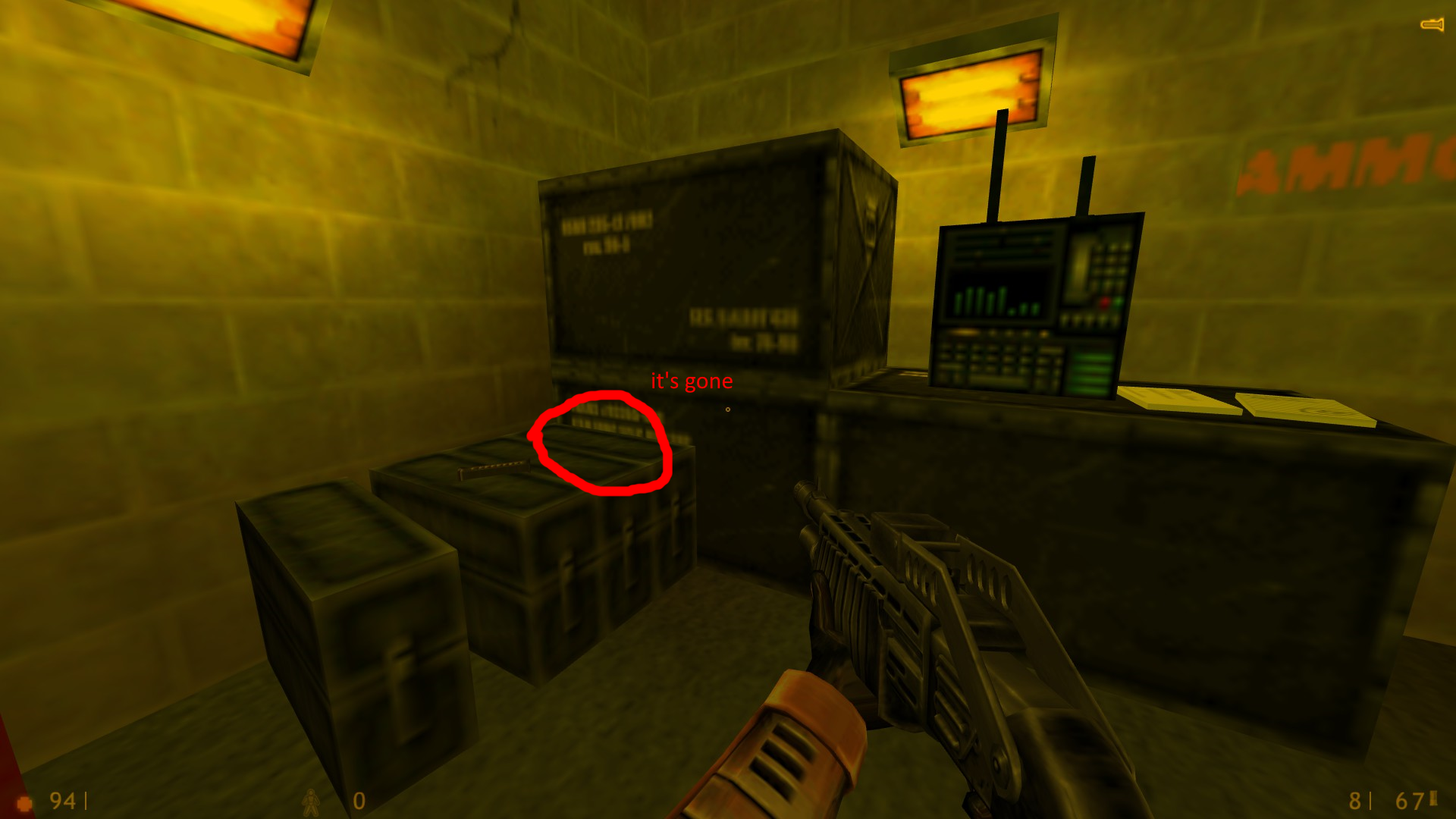 ingame
Can anyone help?