Maybe you could stick to cardinal rotations, i.e., 90/180/270 rather than a free-rotating one? might make it easier to layout/visualize some stuff in 2D i guess

Captain Terror
Posted 4 years ago2015-06-20 23:05:32 UTC Post #326040
Each time you rotated the grid, then would not anything line up with your previous work? When I can almost see a benefit to this, my brain quickly thinks of easier way to do it without rotating the grid, e.g., build the thing in on the regular grid and den rotate it to whatever angle, keeping the pieces always lined up using.

Using Sledge or a HLFix-enhanced Hammer, there are many more tricks available to you to make complex stuff. For one you can more accurately line up complex parts and pieces of objects sometimes by disabling the grid altogether(with no visible gaps in game). Another is you can scale/skew/rotate/lathe things to your hearts content with no problems post compile, especially in Sledge

Dr. Orange
Posted 4 years ago2015-06-29 12:55:52 UTC Post #326140
A quick question: I've decided to give Sledge a chance again, and I noticed auto-selection is off by default. I can't seem to find any option to toggle on auto-selecction, so my question is; How do I enable auto-selection (selection with selection and vertex tool without having to press enter)? 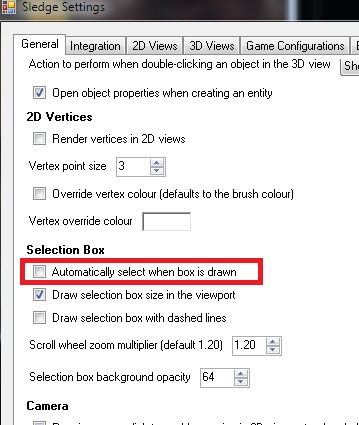 EDIT: Is there an option to align created solids to the currently selected viewport? If there is I can't seem to find it. It would be very usefull when working with cylinders and non cubical shapes (to create pipes that run along walls and stuff).

but honestly the idea of level creation whilst being able to physically manipulate rooms and brushes with your own hands sounds.. amazing. Also a sense of depth to what you are building.

Considering that'd be SO MUCH (seriously, so much) work, for something that's probably a gimmick or toy tech demo at best.

That's very incredibly unlikely, unless you do it

FTFY (what with this being open source and all).

What about adding something that shows the degrees of the brushes' lines in the 2D views? That would be useful to help us aligning the texture to the faces.
The degrees should be shown only when we select a brush, a group of brushes or a brush entity.

TJB
Posted 4 years ago2015-07-11 12:06:41 UTC Post #326283
Speaking of VR, does anyone remember that video that someone posted a link to on TWHL a few years ago? I'd guess it was 2009 at the latest. It was about guy creating a street in an immersive VR environment. There's a girl in a coma and she's supposedly in some kind of induced dream, and the guy's making the street as an environment for her to walk through.

Hey Stormy, how's 'lopers doing? Haven't visited in aaages! No Source support yet, but it's coming.

Alberto309
Posted 4 years ago2015-07-13 14:08:14 UTC Post #326355
Archie, if you use the mousewheel in Hammer, it will just zoom or unzoom the view at specific sizes, you can't move up/down left/right with it. And if you click the mousewheel, Hammer doesn't do a thing.
The scroll bars are good for precise works like when using the VM Tool. Instead of unzoom and zoom again to have a proper view, scroll bars can help moving in the view more easily.
That's my own opinion at least.

Both options are more precise and faster than scroll bars.

I've never knew about that space+leftclick thingy. D:
Also, I ain't use PS. I use GIMP 2 (don't hate me, I just like free stuff).

Thanks for the info tho, Archie.

Pengy still have to implement this.

Anyway I thought of another cool tool that I would love to have in Hammer, rotate multiple objects around their individual origins.

For example I have a bunch of square fence posts that I want to turn at a 45 degree angle, but the only option I have is to select each one and turn them individually, since when you select a bunch at once you can only rotate them all around the median point of the selection. A 'rotate around individual origins' tool or option would be ace.

Penguinboy
Posted 4 years ago2015-07-22 07:17:54 UTC Post #326533
That's a clever idea, but the interface might be a bit awkward. For rotations, it'd probably just be enough to add a "Treat each item separately" checkbox in the manual transformation dialog (Ctrl+M).

When you select multiple groups, would it rotate each group, or each individual element in the group? Perhaps the "ignore groups" toggle could let you change the behaviour. A macro system could also help with performing the same operation on multiple items, though that's a different thing entirely...

In the end I want to have a scripting console of some sort, so you could type something like this in and it'll do it automatically: That makes it really hard to keep an undo stack that won't chew up all the RAM, though.

Penguinboy
Posted 4 years ago2015-07-22 11:28:20 UTC Post #326535
There's not really any way to apply the reverse of a script without saving and restoring the whole map, which would be a massive RAM hog. I'd need to come up with a better way, probably by evaluating the script first and then creating reversible change operations from the result.

Also, I really miss how you could see the models in 3.5.1, instead of blocks of colored cheese. If there is an option to do it (I only see model render distance in the options), let me know.

The speed of the compile tools won't change regardless of what editor you use, but the compile parameters might. The presets in Sledge use the "-low" flag which makes the tools use a lower CPU priority so the rest of the computer is still usable during the compile. If you want to change it, just create your own custom compile profile.

I have some errors displaying as per usual in the compile as 'Entity: ###, Brush #' and I can't see how to go to them in Sledge. I tried to copy them to notepad to revert to using Hammer and couldn't do that, either.

Oskar PotatisIt's never too late to give up. Happily lazy
You must be logged in to post a response.