Specs: The monthly cost is 5$ for these specs but I paid using litecoins. Since I'm not going to continuously pay myself for this server, I've set up a litecoin address and a bitcoin address where you can send the coins if you wish to support the server. Here's a link to a text file containing both the addresses:

This is much easier than using paypal and other services. For this particular matter I ask that you also write a "description" for your transaction if the wallet/service allows you, saying something like "for twhl server from #name# xoxoxo much love", and also announce me through a PM or here on the forum. Please do not send more than necessary, the idea is to support the server and if 3-4 guys donate like a $1 or something, it should be enough. I will not be chasing people trying to send them back the money, this is purely for supporting the server.
The next payment will be on 15th April, I think. I haven't done this before, so bear with me( I also do not guarantee I'm going to be 24/24 solving a problem if one arises, I have a very busy schedule and will mostly only be able to play in weekends).
There are some additional features that I haven't bought because we don't know how involved people will be yet. For example, at +$2.5 we can get a custom DNS, and +4.15$ a dedicated IP. So that would be a total of $11.65 monthly. So if you guys are willing to share the wallet load, yeah we can do this.

Right now the server is pretty much vanilla survival( I actually like it), but there's a crap load of bukkit plugins that can be installed. Not going to stay and configure it this day, but the first thing I'm looking for is adding teleportation somehow.

Since this is a server dedicated to our community, do you guys think we need anti-grief? I mean, I think there's a bit of trust here :).

Anyway, I'm expecting some fellow shouters' here like Tetsu0, DiscoStu and Angry Carrot(a.k.a Mighty Atom a.k.a MuzzleFlash). And a dozen other players I remember playing in the past :D.

We don't need anti-grief. But you might want to create a whitelist to keep the server limited to friendly TWHLers / friends

Striker
Posted 4 years ago2016-03-15 15:23:08 UTC Post #329372
I use CoinBasefor my online account. I think it's the "go-to" service for such a thing and it's based in San Francisco, so for you in particular I think wire-transfers work. Yes that's a referral link, but it only works if you ever buy more than 100$, so what the heck. Here's the clean link: CoinBase.
Yeah you can with paypal too, but this is, I think, if not simpler, how sharing the costs on the internet should work :crowbar:. ( although I do have to use other services to trade from bitcoin to litecoin or viceversa if I don't have enough of one coin to pay).

May I suggest a server resourcepack with custom paintings and perhaps some Half-Life sound effects? You can then use redstone and command blocks to set up a welcome message as well as play a sound effect. I know, there's probably some server plugin that does the exact same thing, but doing it this way doesn't require any plugins, it's just pure redstone. However, to set up the command blocks, you'll need operator status.

Here's the painting texture that we used on my TWHL Minecraft Server back in 2014: 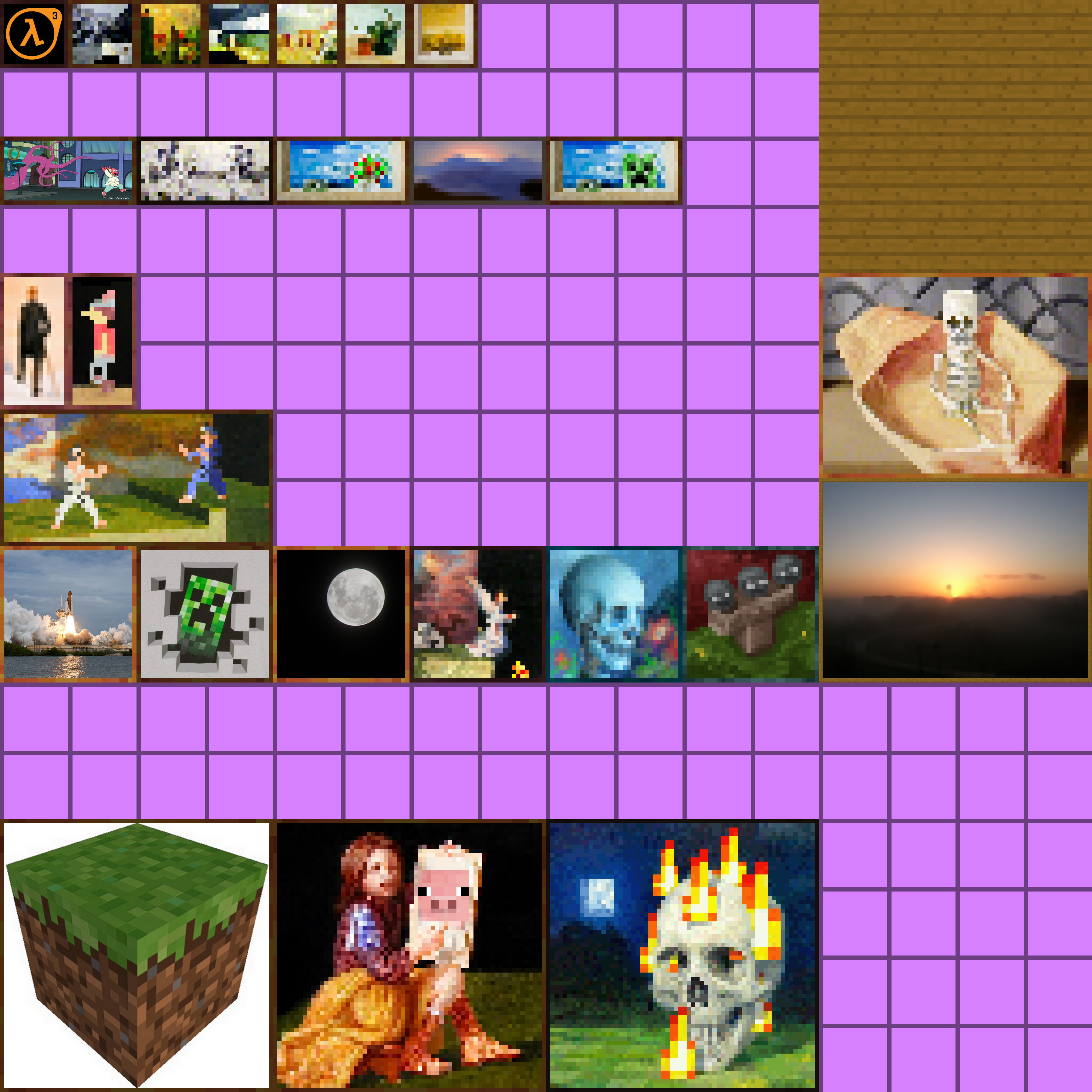 And here's a server icon: Tetsu0
Posted 4 years ago2016-03-16 12:15:00 UTC Post #329386
The Everwood Chronicles: Part 1 I hit the ground softer than I expected, yet my bag of holding spilled its contents across the grass before me. The mocking glare of the skeleton towering over the plateau ridge was the only thing I could see. My questions and fear slowly subsided, and in their place, a warmth took over me; an easy feeling that everything would be alright. The blackness took over as images of the grinning boned hunter slowly faded into nothing.

I swear I could hear him laughing.

Also, I made a pretty shield.

I also would like a world set in Creative, but Striker had some issues with Bukkit when he set up the server so I hope he fixed it.

Creepers still do a fair bit of damage to the environment though >.<

So what I want to do next is add store functionality, so everyone can set up a store with their collected items.

I noticed someone made some huge dirt arrows that I assume point towards the spawn area. Who is the author of this?

I did that, in order to not get lost as I explored the terrain.

Orange, Right now mobs spawn at night and the server seems to be on hard mode. However if you die, you keep all your stuff - including XP.

It is actually set on easy. Also the world generator was set on "Standard".

Shepard62700FR
Posted 4 years ago2016-03-20 09:47:57 UTC Post #329474
@Jessie : Bukkit and CraftBukkit received a MCDA takedown request from Mojang because Bukkit/CraftBukkit is "using the Minecraft server software without explicit permission from Mojang which is a copyrighted material". In other words, instead of using the vanilla Minecraft server JAR file, you would use the CraftBukkit one. Therefore, Bukkit and CraftBukkit are now classified as "dead" since the last stable binaries are for MC 1.8.X and there won't be any updates. It seems Mojang "hired" the devs to "remake" Bukkit/CraftBukkit as part of the official vanilla Minecraft Server software.

Striker
Posted 4 years ago2016-03-20 10:57:56 UTC Post #329475
Alright so I've set up the ChestShop and Vault plugins, and they seem to be working, but I'm very confused as to how they work without an actual economy plugin. That's because I couldn't find an appropriate economy plugin: most of the popular ones are either abandoned or not working for the latest minecraft version. I'm gonna need suggestions with this one. And that took WAY longer than I'd like to admit. 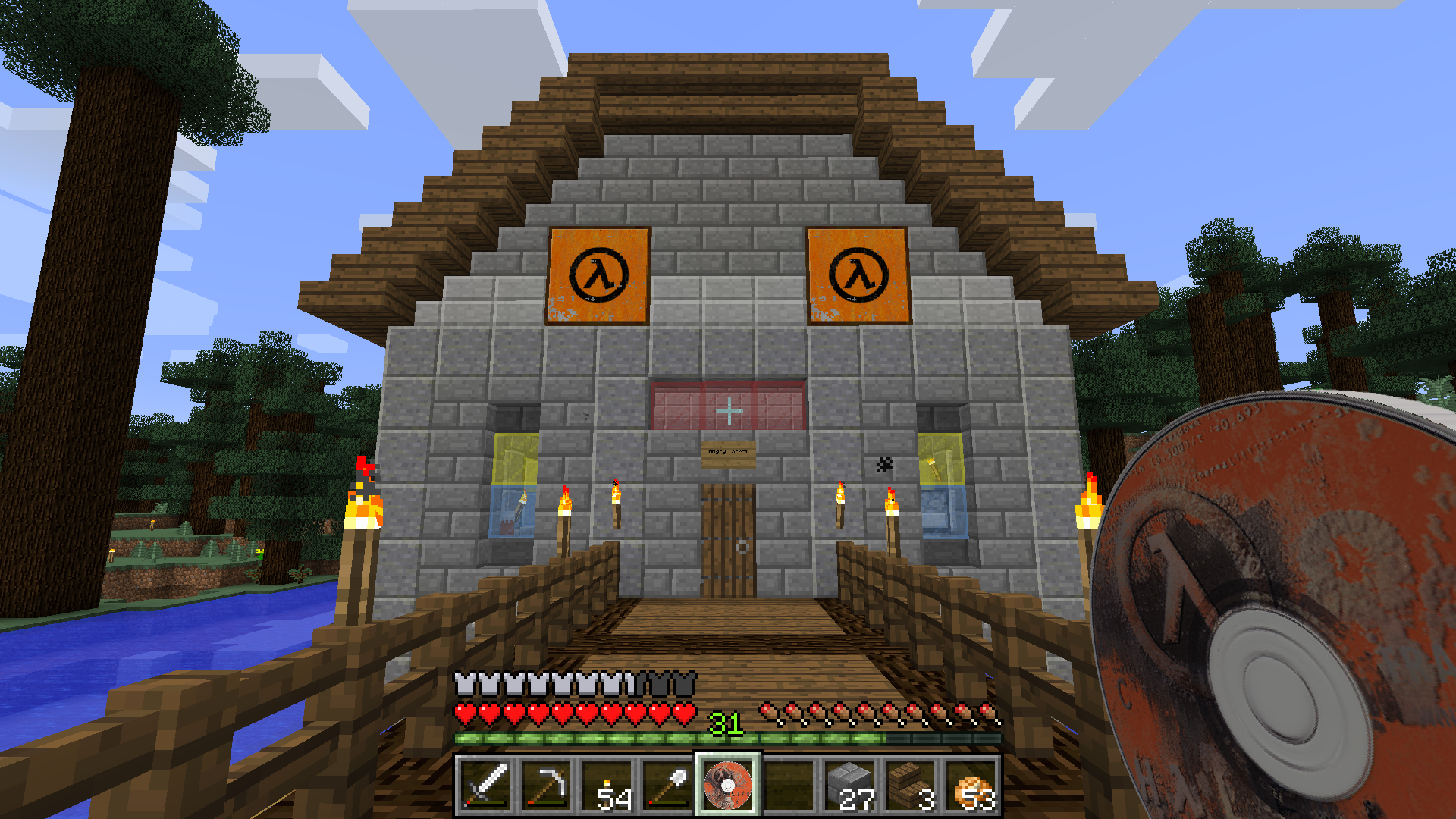 Updated the pack due to an error in the sounds.json file.

[EDIT] Some screenies from the skies:

The lake area, near the spawn (Atom's house is here, mine and Shepard's)

Current exploration of the map. You can notice that far to the west there's a jungle meeting a desert, lots of goodies must be in that jungle! To the south there are some plains with horses. To the north-east there are some interesting island formations. Not too far from Tet's house also, to the south-west from spawn is a village I think he discovered. Tetsu0's home and his road for which I think he put more effort that he wants to admit. Parallel to that runs a water canal for boats which connects the spawn lake with the river near Tet's house.

Another view of the spawn Who's Zach in the forum? It's a name that doesn't ring a bell.

Why do I keep finding PIG spawners in dungeons with empty loot chests? I've found at least two in unexplored areas so I'm pretty sure they haven't been tampered with.

Striker
Posted 4 years ago2016-03-21 17:47:55 UTC Post #329500
I figured out how to configure the overview mapper and make a crop of the visible area during night time. It's also possible to rotate the view, so now Jessie's home is visible!

[EDIT] How do you get a skeleton horse? (actually somebody asked on a sign this already :)) )

There's a aombie spawner near your place stu, it's just jutting out of the bottom of a mountain.

Saw it! I have some small adjustments for it planned.

I'm thinking there may be a bug in 1.9 where spawners are generated incomplete or something.

Is it me or is that screenshot extremely dark? I can barely distinguish any details.

It's a nighttime shot.

Also, Let me know who wants a connection. I'm working on Stu's and Jessie's right now. I even took special care to not disturb the view from Stu's house by building an underground passageway suitable for a horse and rider.

Is it me or is that screenshot extremely dark? I can barely distinguish any details.

It's a nighttime shot.

Can't tell if sarcastic or not. Of course it is, but some night shots are much clearer.

So I installed the OptiFine mod, which by itself is quite recommended to have(you can squeeze a bit more FPS on lower-end machines). This is required to run shaders in Minecraft. I then downloaded Sildur's Vibrant Shaders (Medium), and later in the screenshots(later edit: seems like the screenshots were not uploaded in the sequence I took them) I also installed S&K Photorealism resource pack.

The result is pretty damn impressive: This is not for low-end machines, but should work quite well on mainstream modern graphics cards. I've got an nVidia GeForce 650m on my laptop where I tested this, it's from 2012, and got between 20-25 FPS on 1600x900 resolution. 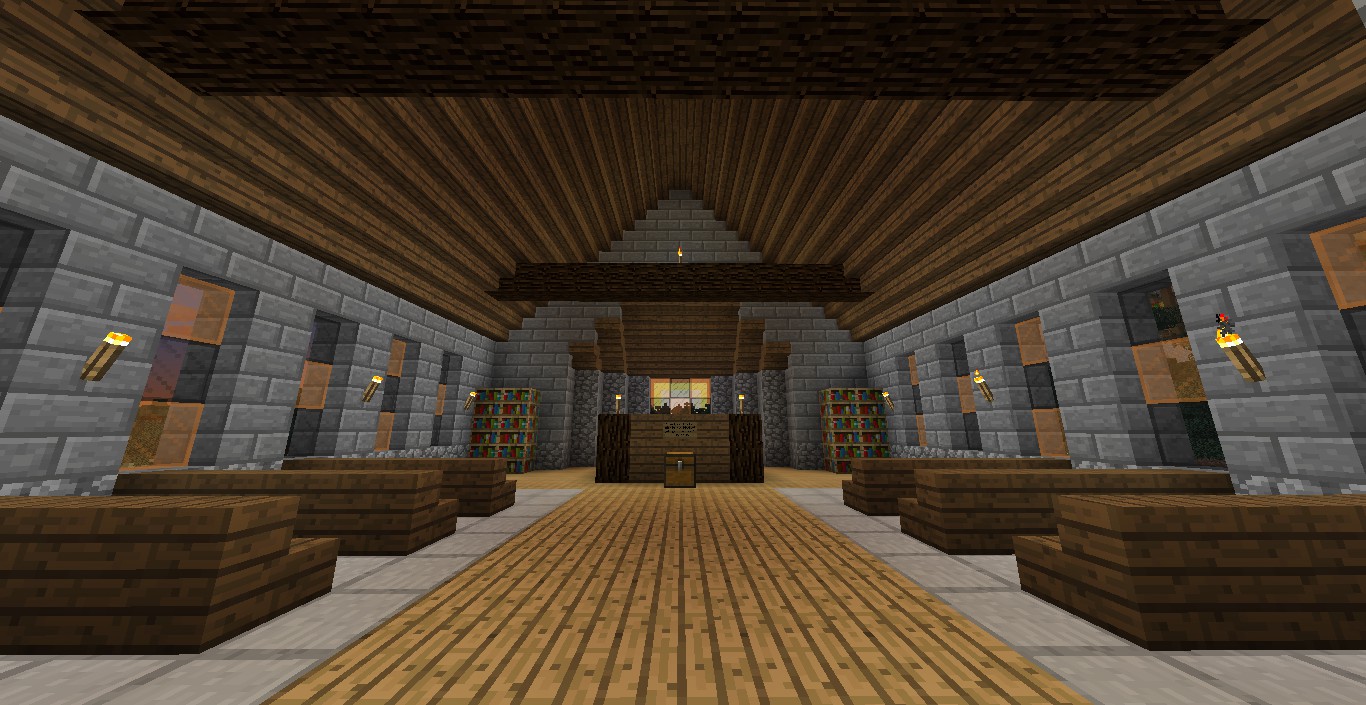 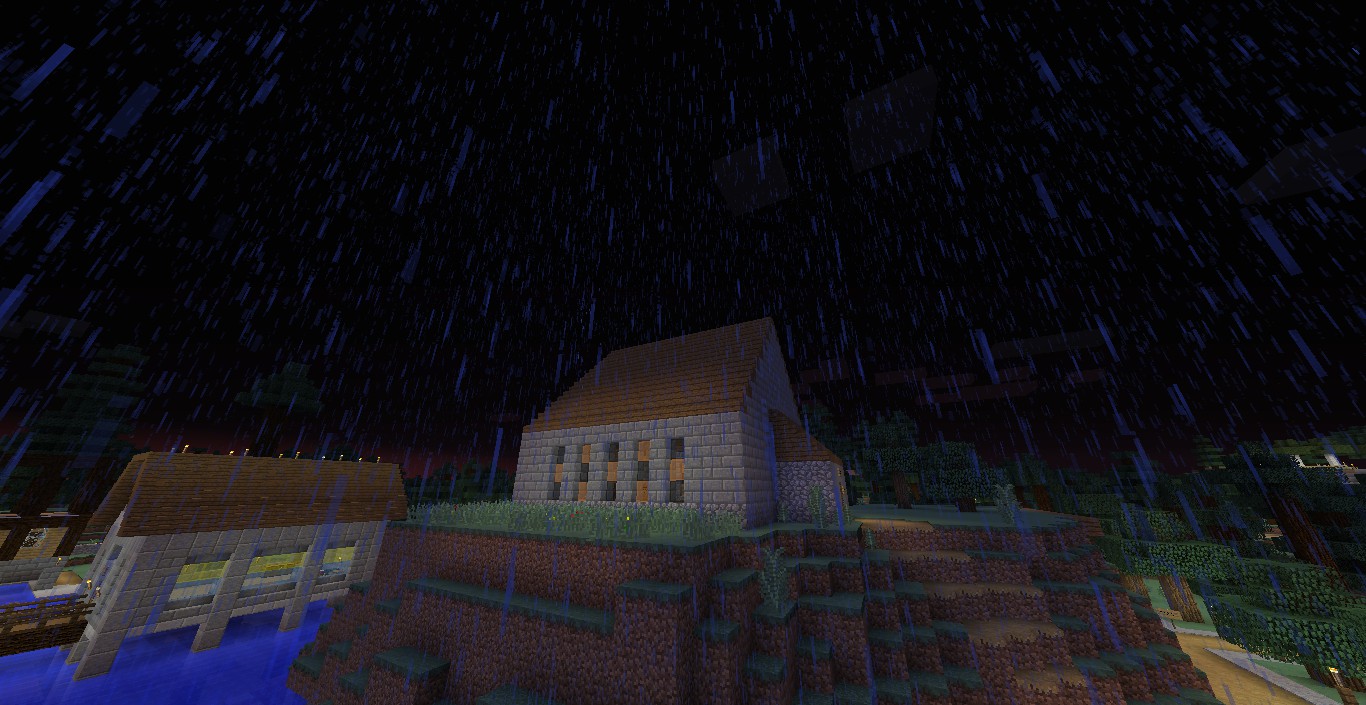 The Chapel of Freeman is finally complete.
Anyway, nice server! Hey I know that house.

Today I lost the best bow ever in the stupidest way possible. I had a Power III + Unbreaking + Mending bow kindly gifted by Tetsu0. I was exploring a cave and just around a tight bend I came to be face to face with a creeper. I mashed the keyboard to step back but in the mayhem I managed to select the bow in the hotbar and then press Q. The bow was dropped right in front of the creeper as it was blowing up so the item disappeared completely. Rest in peace, enchanted bow.

I set my drop key to G like counterstrike

So after losing all my inventory for a second time after I died in the Nether, I must ask: Do you have to enable it separately for the Nether? We setup a little base camp above ground. You can take the train from spawn. It's over 1K long so you also get the On a Rail achievement for riding it. You can get a nice view of my place too. Do you think these versions are worth the effort of updating?