I'll just stop arguing with you

I'm not even going to argue with you.

ITT: Crollo waves his e-penis around.

But isn't that every thread?

Some shots from a test video.

I think you misunderstood the concept of using DSLRs to shoot video.

DSLR's are completely photo-based tools that usually can have decent video modes, and while it's not particularly the recommendation, I would probably shoot video with a DSLR anyways.

I mean really, why would you expect something like that?

Went to Wild play, was fun.

My camera died. I partially blame my friend, but mostly me for lending it to him. Goodbye expensive hobby.

Is this your D90 that died? Fuuuuuuuuck...

EDIT: Question Brendan, for your camera

Did the school supply it or did you buy it? If so, what'd it cost?

Archie
Posted 8 years ago2011-10-26 00:21:45 UTC Post #300240
Quite pished, someone else was taking photos tonight for once!
Felt the thread needed an update.
Usually as the photographer I never appear in night out photos

D70s are ok. But I'm still on the Canon team

I am borrowing it from my grandmother.

I wish I had awesome grandparents that had SLR's like that. And my last attempt at getting half decent shallow focus with shitty 1/2.5" sensor cameras.

Also by definition a pedantic is already an ass so adding ass to the end is a little excessive, like calling somebody a moron idiot... Just saying.

Unfortunately the quality isn't that great even full res if yo have a monstruos monitor. They look fine on my 19 inch monitor though.
The limitationsxof a 1/2.3' CMOS sensor... I want a DSLR so badly

Striker, I just used a full frame DSLR and it didn't exactly give this 'great full res quality' that you say DSLR's have... I'm on a 1280x1024 monitor... Are you sure just simply buying a DSLR is going to just work in that manner?

EDIT: I just shot raw for the absolute first time... 25MB? I think I'm going to go into the next room and have a breakdown.

These two are absolutely stunning! I'm impressed, The_(c)Striker. Beautiful composition, colours and focus. What exactly are you shooting these with?

Crollo
Posted 8 years ago2011-11-05 04:00:27 UTC Post #300490
Ah fuck, what. Asked the guy who owned it if it was full frame and he said yes, my bad... Still, the point stands, even a APS-C sensor is pretty fucking massive compared to a 1/2.5" sensor, and I'm not seeing any magical radical improvements from the sensor size alone. You could of course easily make great photographs using a DSLR as it's so powerful, but don't just act as though 1/2.5 is really limiting you THAT much... Like a DSLR you have to actually WORK with the equipment to get great results. Look at my T2i pictures for an example of how you can still very easily get poor results, the large sensor isn't going to negate or fix that.

Tomorrow I'll be getting an EOS system camera so I won't be using the FT QL anymore. I'm going to miss it but oh well, EOS.

Also all Canons have been EOS since 1989.

I'm not going into detail as it's not like you can't learn this from anybody else but me, but sensor size does indirectly have an effect on depth of field. You may or may not use that to your advantage when taking photos.

I'm sure I've posted this before, but you can take a look at this baby again:

Crollo
Posted 8 years ago2011-11-05 06:09:45 UTC Post #300492
Jesus, EOS was introduced in the 90's? I thought it was at least introduced in the 80's. But yes, I'm replacing my FT QL because there aren't any current-production lenses for it, whereas a EOS camera will take all current autofocus lenses, of which I imagine there are hundreds and thousands of lenses.

Yeah, depth of field is definitely affected by sensor size, and a larger sensor size of course does better in low light and soforth, but you still have to actually put the effort into it, so I'm just pulling Striker's leg a bit because he's complaining about his small sensor size, by telling him a small sensor size can still accomplish a lot. [Protip: Replace sensor with penis. :)] And yes, I do indeed make use of the larger sensor, the EF 18-55 kit lens on the T2i has shallower focus at 18mm then my shitty kodak has at 102mm...

whereas a EOS camera will take all current autofocus lenses

Not necessarily. APS-C and APS-H can take both EF and EF-S mount lenses, but full frame cameras are only compatible with EF mount lenses.

EOS was introduced in 1987 IIRC, and all FD mount models were discontinued by 1989. It was Nikon that introduced autofocus systems a few years earlier.

Crollo
Posted 8 years ago2011-11-05 06:55:46 UTC Post #300494
Well I'm actually not getting a EOS DSLR, I'm just replacing my FT QL with a Canon EOS Rebel G, so I'm not concerned about EF\-S lenses as there are so many of both types the difference is probably negligible. [Although, I do remember somebody buying a Canon SLR and then asking if it was full frame, haha.]

Either way I might be able to get a DSLR through the school, but that's way up in the air right now... Looking at a D70.

Also got a Minolta body, guy threw it in extra, don't know why but hey, he's a nice fucking guy.
Yeah I know, my lighting is terrible, I need to mess around some more.

What's the problem with autofocus? You just have to learn to use it. 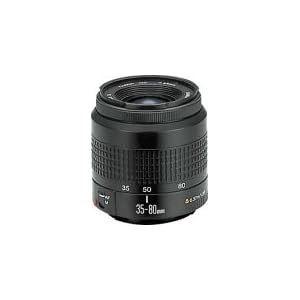 My only problem with autofocus is just that particularly on older cameras [Such as this one] it tends to be somewhat hit and miss at times, I don't know why it bugs me as I'm not a snapshot person, but I never use high end [Or even entry level] camera equipment so that's why I despise AF.

Also I've already gotten film, the school payed for it so that works out for me. Run about 5 rolls through the FT QL and I have 5 left.

I saw about 2 weeks ago at a photography course( a teacher brought us a photographer, but it was more like listening to things I already knew) a canon lens with f/1.2 . The price? ~3000$. But it was a piece of jewelry.

What I do know is that at some point there was a lens produced that went up to f/0.95. Maybe when I'm rich and can afford to burn 100$ bills at at time.

Also that 85mm looks great. Too bad it costs an arm and a leg. [Alright, it's pretty damn cheap when it comes to lenses, but I need to get a damn job.]