sirdownloadsalot
Posted 3 weeks ago2022-09-08 03:37:21 UTC Post #346861
Hello! I've been using J.A.C.K to make Goldsrc maps for a while and only recently I've been plagued by two issues that have made it nearly unusable.
1) When I open maps, certain textures become stretched and distorted in a way that wasn't present when the scene was saved. This only seems to happen to certain surfaces maybe as a result of the UV editing, but which surfaces are affected is unpredictable and I can't figure out what the connection is.

How the map was saved.

How it is loaded
2) Maps randomly stop compiling and become uncompilable, they get up to the SolidBSP stage of the hlbsp.exe and just hang. I even left it for an hour to see if it was just slow, but it won't progress past a certain number. This happened on another map and ended up resolving after I saved a copy of the map, deleted all the old files and started over, but now that's not working for this new map. Keep in mind the map compiled fine, I changed the position of a few textures, then encountered this problem so no new geometry or entities were introduced. This has effectively left me with maps that are unusable. I don't think it's a complexity issue, this map is very barebones and small. 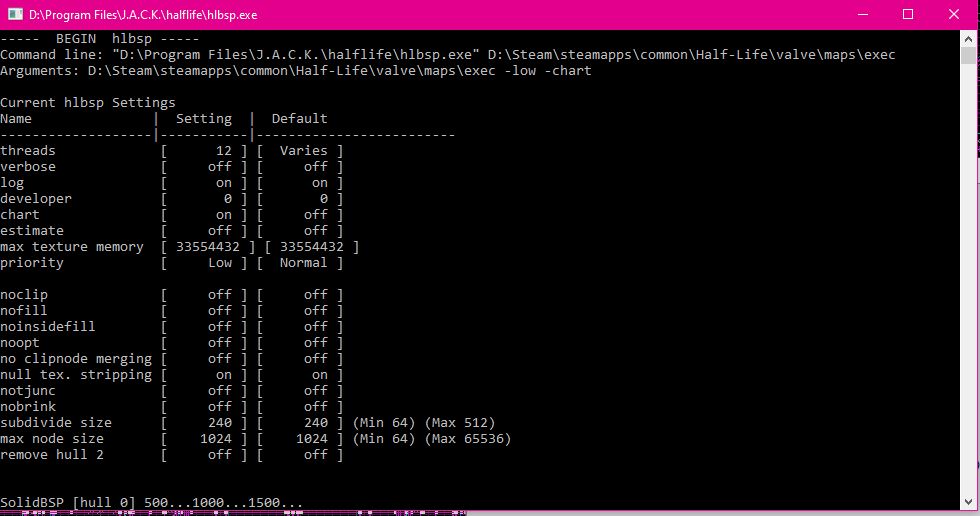 Where the compiling freezes. On the last map it froze at 4000 instead of 1500
If anyone has any experience with this issues, I'd really appreciate the help. I love J.A.C.K's features but if I can't resolve this issues I might have to abandon it.

sirdownloadsalot
Posted 3 weeks ago2022-09-08 03:50:16 UTC Post #346862
Update: As an experiment I selected every single brush in the map and hit reset on all the texture co-ordinates and now the map compiles fine, so somewhere in the map there's a brush with texture co-ordinates that is freezing the compile process? I still can't figure out what exactly the issue is, still gotta narrow down which brush is causing this issue...

Update 2: Okay! I think I narrowed down the second issue. One of the brushes had a face with a scale of 0 on the X axis, changing that resolved it. However I'm still completely baffled about the first issue, or how that brush even ended up with a 0 scale. I haven't touched this area of the map since the beginning of the process and it rendered in the past okay, so I'm worried at some point I loaded the map and it just became a 0 scale on it's own due to issue 1. This means I'll have to go hunting for the random brush with this issue every time J.A.C.K decides to randomly corrupt a textures co-ordinates. I still need to figure out how to solve this problem.

Bruce
Posted 2 weeks ago2022-09-08 15:58:49 UTC Post #346865
At least on the linux jack, if I remember correctly, textures get screwed up if you open the map with UV lock turned on. If you get these messed up textures, don't save the map, instead turn off UV lock and then restart jack and open the map again, then it should be fine

make sure you don't save your map with UV lock turned on, apparently that can corrupt the faces

At least on the linux jack, if I remember correctly, textures get screwed up if you open the map with UV lock turned on. If you get these messed up textures, don't save the map, instead turn off UV lock and then restart jack and open the map again, then it should be fine

Ahh, that might be the issue, I had UV lock on fairly often. I fixed up the warped textures and the seem to be behaving on reload now, so I'll keep that in mind. Thank you!