Compiling is what you have to do to the map you're working on before it can be played in Half-Life. The process involves several programs - the first one is provided with a .map file (which is produced by Hammer), which it processes and then leaves behind one or more files to be used by the next compile program. This cycle repeats itself for each program, until you end up with a .bsp that can be played in Half-Life.

This is the method most people will start with. It relies on a correct set-up (Tools -> Options), but once that's sorted out (and it can be challenging), then you've got two pretty useful compile options to try. The main advantage of both of them is that they're easy to work with. Just press F9 when you want to test your map, and within a couple of clicks, you're in Half-Life. The only real disadvantage is that lots of resources are taken up by Hammer, so the compile tools (especially RAD) won't have as much memory and CPU power to work with. On a powerful PC, this may not be an issue. 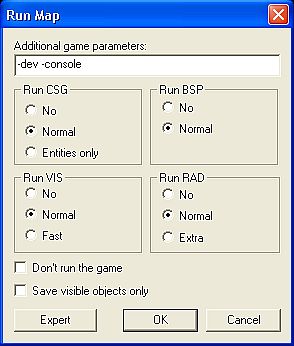 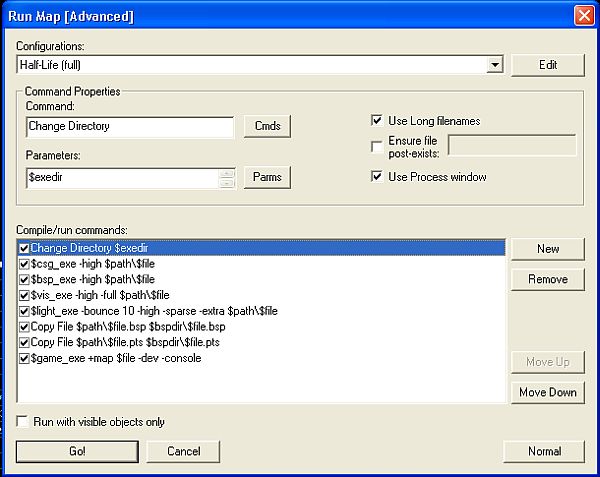 Change things by selecting one of the Compile/run commands (the things with the checkboxes). You will be shown the Command and its Parameters. Click the Cmds button to select a common command, or to select one of the compile programs. The things with $ in front of them (like $bsp_exe) are variables (mainly things set in the Tools & Options screen under Game Configurations and Build Programs). $bsp_exe, for example, is the BSP program.

This set of commands should work, providing your Hammer setup is correct:

The alternative to compiling within Hammer it to do it, er.. without Hammer. The main advantage to this is that it allows you to do compiling after having closed Hammer, which means you can have as much free memory etc. as possible to give to the tools.

Also, some people prefer the freedom that working directly with the tools provides, but, frankly, it can't get much more free than the Expert mode within Hammer.

If you've ever written a DOS .bat batch file, then you'll understand what to do here. Batch compiling is basically what Hammer does, except in a raw DOS mode. This has the advantage of letting you define what programs are running in the background, and can reduce compile times.

To create a batch file, simply open Notepad and type the following: Replace the C:\mymaps\testmap with the path to your .map file (exported from Hammer - File -> Export to .MAP). Notice how testmap has no extension - the tools will work it out. Save that file as something.bat and run it. You'll be left with a folder full of intermediate files with the original .map... and a .bsp. Move the .bsp to your Half-Life\maps folder and then run HL with -dev -console, go into the console (with ~) and type map testmap.

Of course, you could make the batch file do all that - just edit it so that it looks like the Hammer Expert mode, substituting DOS commands for the Hammer ones, and giving the variables values. For example:

GUIs (graphical user interfaces) (usually) provide a more powerful, easier-to-set-up interface for the compile tools, often allowing you to modify all the parameters available to each tool. There are several GUIs available, and each one will have its own setup instructions. You can find one, ZHLT Compile GUI, here. They can be a bit like Hammer's Expert Mode, but of course you don't need Hammer running to use them.

Personally, I find them more complicated than they should be, but if compiling in Hammer isn't an option, and you can't be bothered to learn about batch files, then they're your best option.

Notewell
Commented 13 years ago2009-06-21 20:26:33 UTC Comment #100541
Note to newbies: Hammer/Worldcraft now uses RMF files as well as MAP files. They serve the same function, but RMF has a few more capabilities for in-editor options. These options do not affect the finished BSP in any way.
VMF is the format used by Hammer 4.X, the source versions of Hammer. It is similar to RMF.

User#6970
Commented 4 years ago2017-11-15 02:50:54 UTC Comment #100544
I had the "Access id denied" error message when running the Valve Hammer 3.5.3 advanced compiling dialog. It was working with 3.5.2 though. "Run as Administrator" on hammer.exe wasn't fixing it. I ended up creating my own .bat file and adding it as a new compile step while disabling the others. It works for some reason. Private message me if you want the .bat file.