Create a map, where water plays the main role! Play with this fluid material, and make something outstanding, We'll be looking for well bulit maps, with an original idea - you may experiment with surreal themes too. So, let the mapping flow! Note the new rules. If we don't get much of a turnout, competitions will be suspended.

As a special treat, and a way to say a big "Thanks!" to all who entered this compo, I've decided to do some extended writeups for the winners AND writeups for every single map that was entered into this competition. When TWHL3 rolls around, you will receive a new statistic in your profile page that will show how many competitions you have entered. I've also selected some Honourable Mentions, which will, in the future, receive special awards.

After opening up the competition to both Goldsource and Source and extending the normal time for a competition, we received an astonishing...two entries for Source. Oh well, what can you do! As such, these two entries automatically get a place, but the question is: who gets first and who gets second? After viewing the maps, it was fairly clear who came up with the goods to land the coveted first place.
Download 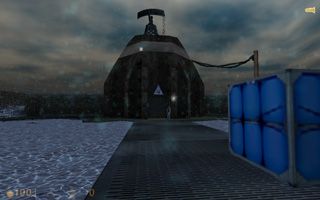 (GoldSource) It was very difficult to pick a first place winner: the second place winner was just narrowly edged by this extremely polished and entertaining map. Boasting some extremely nice mapping and a good story to boot, Fathom 2.4 is a worthy first place. HLHotdog clearly went all out in crafting a fantastic mini-mod that proves that there's still life in the old Goldsource engine yet. As well as this, Fathom 2.4 uses water as an accompaniment to the story (those sharks were brilliant, and a nice remodelling of the Itchyosaur). For such a short mod, the whole thing was engaging and fun to play, even though the player does have to do a bit of swimming. One rather large highlight would have to be the impressive mini-sub, created entirely in Hammer! Congratulations!

I plumped this corker of a mini-mod in first simply because it gave me just a bit more over the second place entry. They were very close though!
Download 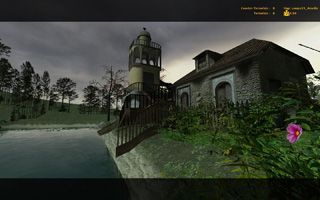 (Source) doodle has once again demonstrated his growing talents within the mapping world with this simple little map. While not flawless in every aspect, the map itself is nicely done, with a rather charming little scene chosen to represent the water theme. doodle also sent me the picture that inspired this map, and I was pleasantly surprised at the accurate portrayal of the scene within the Source engine. Well done to him: a well deserved first.
Download 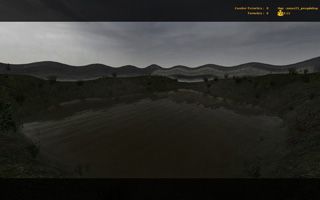 (Source) This map is quite clearly superior to doodle's: unfortunately, it did not win because doodle bribed me at the last second. In all seriousness though, the name says it all: a somewhat, uh, well, pretty presentation of a small lake or a large puddle with a rather...interesting curvy wall, produced within Penguinboy's rather nice displacement generator. What more can I say? I guess the wall is shiny...
Download 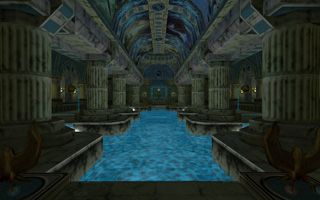 (GoldSource) In a word: wow. Upon loading up this map, you'll be absolutely blown away by the intricate and detailed mapping, the superb textures, and the general atmosphere that Elon has managed to capture in this beautiful map. Small, detailed fish ornaments spill out cascades of water, columns rise elegantly from the pool to the ceiling, and the entire temple is bathed in a calming blue light. You almost can't even see the Goldsource engine running under this, it's that special. Unfortunately, the map is simply a "look and enjoy" map, which is why Fathom 2.4 edged it out. I would certainly hope that Elon extends this into a mod, with a story: if only we could see visuals like this all the time!
Download 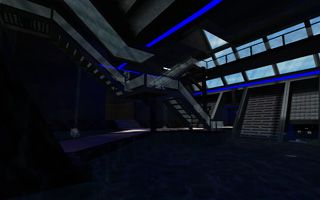 (GoldSource) Coming in third place is zeeba-g's Section 23, a nicely mapped secret base of sorts. Using water to accentuate parts of the base, zeeba-g has crafted a wonderfully unique base that doesn't give off that well-worn Half-Life 1 feel that we've all grown accustomed to. The little touches in this map were quite cute, including the fish, the bonsai and probably most impressively, the water droplet effect that appears on the glass surfaces. Unfortunately, zeeba-g forgot to change the skybox in this map, so the fact that it's raining on a perfectly cloudless day somewhat nullifies the effect somewhat. However, that is a moot point for a nicely crafted map (and kudos on the rain sound effects, it actually did sound like there was rain in my headphones).
Honourable mentions (all for Half-Life):

There was something particularly nice about this map. The use of a couple of HL2 textures certainly helped to bring out the wonderful mapping. I have to give particular mention to the music that Alex used in this map: it accentuated the mood greatly, and was a fantastic addition to this map. All in all, a very relaxing map, helped by the aura that Alex managed to bring into his map. Well done, Alex!

For a map made in under a day, it's definately an impressive effort on ZombieLoffe's behalf. If ZombieLoffe had spent some good time on this and extended it into a mini-mod, it could've easily landed a place in the top three. However, ZombieLoffe's effort cannot be undermined, with a very nice looking map that ends in a rather, well...grim way. Congratulations, ZombieLoffe!

Surprisingly, Tetsu0 has crafted a Deathmatch map for his competitions entry, one that employs water to aid its gameplay! While the player is indoors, they must simply play around in a standard deathmatch layout: the twist comes in the fact that the player can leave the confines of the map and head into the water to swim to other parts of the map! A very unique twist on the deathmatch gameplay, and one that'd definately like to test out on a server. Nicely done, Tetsu0!