This tutorial is primarily about the multisource, but it also covers lots of other stuff that is used in the example map because I happened to be bored when I made it.

The multisource is very useful, and it can be applied to many situations. The concept is simple: it's a trigger that will only activate its target once everthing targeting it is active. In boolean logic, it's similar to an 'AND' operator. This tutorial covers two uses: triggering an event, and unlocking a door. To add a bit of variety, we'll make sure the 'event' only happens once, while the door activation can be toggled.

This tutorial is dependent on its example map, so you might want to download it to experiment with.

The Multisource and Buttons

We'll start with the basic multisource setup. For this tutorial we will use three buttons as our triggers, but you can use any number of any kind of trigger. The multisource will only trigger its target when all of the triggers targetting it are active, or 'on'. So, because we're using buttons, we'll need to make sure they stay on long enough for the player to be able to press all three. In the example map, the delay is 13 seconds for each button. In some situations you might want the button to stay pressed forever though.

Each of the buttons must target the same thing. Try beam_multi. beam_multi is of course the multisource, which in the example map targets beam_relay. That's about all there is to it,
in fact.

But let's go a bit further. The beam_relay is a trigger_relay that targets beam_manager. The important thing about this entity is that the flag Remove on fire is on. If the relay weren't there, once the buttons had reset, they could be turned back on again, and the multisource would toggle its target off, which we don't want. But because it is there, after being triggered once, the relay disappears and the link between the multisource and the main event (beam_manager) is broken, so beam_manager cannot be retriggered.

Finally, there is the multimanager called beam_manager that handles the main 'event', which is a sequence of sounds and beams that turn on one after the other. The delays are determined by the values of the keys of the multimanager (turn off SmartEdit in the Properties window to see or add custom keys).

See if you can get Barney to follow you out of the enclosure quickly enough, then get him to run into the big red beam. Oops! 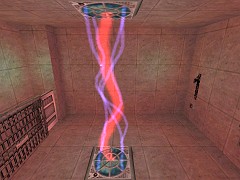