Admer456If it ain't broken, don't fox it!
When fate and destiny aren't on my side, and when luck doesn't happen to have anything to give me at the moment, then I know for sure, time is only on my side.
And that's gonna take a while. I'm definitely hoping for a miracle to happen, you know. I don't know when it'll happen, I don't know IF it'll happen, but I'm certainly hoping that it will. The two greatest things in life I've ever had experience with, are both words that begin with F.
It's not fraud (never had that), it's not fire, it's not fu--ing (heck, I never experienced that either), it's not fish either, even though it's pretty good, especially trout, mmm, but rather, it's forgiveness and friendship.
There's hardly anything in this world I wouldn't forgive to someone else, and there's hardly anyone in this world who could make me feel as good as a true friend could, someone I feel I don't yet have. Well... at least yet.

Those two words kept appearing in my dreams in one form or another, and almost every time it's the same story. I either ask for it, or beg for it, and then everything seems to become positive, go back to normal. Then I wake up, sweating and in fear. I don't know why, because I don't remember most of the dream. I sometimes really wish to cry or at least sob silently. I can't scream because my soul is already screaming. It's been screaming for weeks...
All I know is, something, or someone, haunts me. It's not really an "it", to be exact. God knows what could've gone better if I hadn't said the right thing in the wrong time. It might be too late now, but at least I've learnt an important lesson.

Who knows, maybe it's not late yet. After all, time is on my side. Time knows what the best moment will be. Time has brought back a lot to me, that I once lost. In turn, time just took... time. My patience, my will to wait for things, that's gonna remain infinite. I'll let time take as much as needed, since both of us need it.
Heh. Time... I feel like someone out there likes testing my patience for certain things.

Always remember to forgive each other, people. Forgive, but never forget.

Speaking of time, today I became an adult. Damn. Wish it came sooner.

I thought your word was Fate or Future, anyway, nice message.

It does carry a certain message and even a whole story behind it, though, but that's up to others to figure out one day. 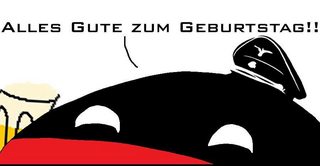 Sorry that I'm late on this, not really online these days.

I remember when TJB once surprised me for my birthday, roughly a month after said birthday. So better late than never!