You've probably seen quite a few billboards outside shops and things that rotate, allowing you to see four different adverts, or whatever. Well, it's very easy to make one of these in WorldCraft, and light it up as well.

It seems logical to have a rotating billboard somewhere outside, but it could easily be adjusted to go inside a building. So you need somewhere to put it - I've just used a flat piece of ground, with a sky texture all around, and the environment setting in Map Properties (in the
Map menu) is black. Create the actual sign first. I used a large 'Lambda' sign, and textured all four sides of the box. Place that on a pole of some kind. 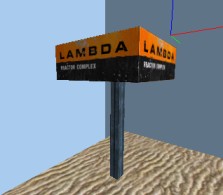 We're going to make the sign rotate, and it's not very difficult. But first you'll need an origin brush in the middle of the sign. Select the texture called origin, and create a small cube that you put in the middle of the sign - the centre of that cube is the axis around which the sign will rotate. Then select both the sign and the origin, by holding down
Ctrl, right click, and select Tie to Entity. From the list, select func_rotating. By looking at the properties you'll probably notice that it was designed to create fans, but as long as you ignore the damage and sound-related properties, it will work. Set the following: That's it! 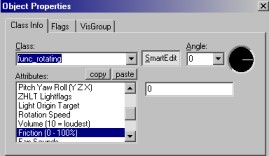 Let there be Light

Now for the second part. Create a spotlight thing on the ground, and give it some interesting texture, like +0~tnnl_lgt4. One important thing in Half-Life is that entities that move (except models) get their lighting from the point that they are at in the map, before the level starts. This, combined with the fact that the texture in question is a light (i.e the texture itself emits light), means that the sign will only be lit on one side when you play the game, even though it rotates. Obviously this won't do, so you will need to balance the lighting on the other
three sides. Do this by placing light entities just below the sign on those sides, and experiment with the colour and brightness until the lighting looks balanced. Your front view should then look something like the shot on the right.

Well, your rotating billboard is now lit up... but not very interestingly. There's a little trick that you might have noticed in the original game, where light is made to look volumetric. This can be easily achived with a brush that's given some special rendering properties (explained in detail in one of my other tutorials). Create an 8-sided spike primitive, and rotate it around a bit so that its base is up near the sign, and the point over the light. Apply the c1a3yellow texture, which is a nice gradient. Then tie it to a func_illusionary entity (which is also explained in the Rendering Properties tutorial), and set Render Mode to Additive, and FX Amount to 50. It might take a bit of tweaking to get the light beam to look perfect. If you're desperate, you might be able to break the beam up so that it doesn't appear in areas where there would be a shadow. It's not easy, and it often leaves
the beam looking fragmented.

You might also have noticed that during the game, the light beams you see generally allow the player to walk into them, and appear as if they are moving over the player. However, in the example map, this doesn't happen - the beam just disappears. This is because it is not hollowed - something you could try, but it might cause problems if your spike has many sides (like 8), and it may make the beam look a little strange, but try it anyway! 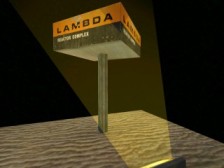