This tutorial will explain how to use materials to make custom textures play different sounds when you run on them or shoot at them. Materials will add a lot of depth to your map and increase the level of immersion for players, and can be used to balance your map for games such as Counter-Strike in which sound effects play a key part.

Usage of the materials file

The sound effect that plays when a player interacts with a surface is determined by the materials file. It's a plaintext file which you can find or create in the game's sound folder (Half-Life\game\sound\materials.txt).

The materials file contains a list of most of the textures in the game. Each line is reserved for each texture and is prefixed by a specific character to determine which texture type the game will match the texture to. A couple of texture types unique to Counter-Strike are included in the following table, be sure to check your particular materials file for the game you are working with as you may have more options than this. Additionally, only the first 12 characters of the texture's name are needed for most games built with this engine. One exception is Counter-Strike, while still checking the first 12 characters for bullet impact sounds, will actually use the full length of the name for footstep sounds.

Distributing materials with your map

Players that download your map in multiplayer won't be able to download the materials configured for it, they will only hear the default sounds for your custom textures. It's not possible to force a player to download your materials file in online play, but there are some workarounds. 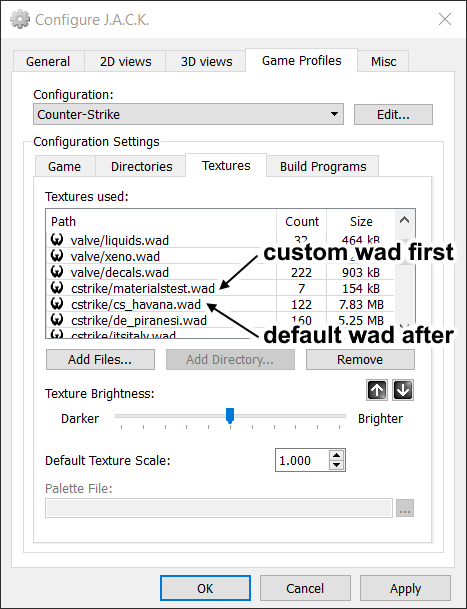 Custom wad first, default wad after
However, the game can still load the default WAD into memory first, ignoring the custom texture from your WAD. The best solution for this is to use the -wadinclude compile parameter for your custom WAD. When loading your map, the game will prioritise the embedded custom texture and it will be loaded every single time.

Another solution is to avoid using the default WAD altogether in your editor. When you export the map for the compiler, the map editor will create a keyvalue in the worldspawn entity which contains the entire list of the WADs in use by the editor. You can see this list in the compile log, excluding unused WADs: If you don't use any textures from the default WAD and remove it from the list, the game won't load the default WAD into memory and only load your custom WAD instead:

Default texture names as a prefix