Okay, a little introduction first. This tutorial is meant for people who have reasonable mapping experience. If you're completely new to mapping, this tutorial probably is not suited for you. You better take a look at the GenSurf program (widely available). But you don't have to be a professional in order to be able to use the technique described here. Just pay attention and experiment a lot! You will be using Worldcraft's Vertex tool a lot for the rocks-making technique described here. So be careful with what you do with that, since you easily create invalid solid brushes when you misuse the tool.

We are going to make realistic looking rocks and desert-ground using triangles. Using triangles has a few great advantages: Two important things before we start! Always: This may sound a little strange, but I will explain the technique by starting with a simple boxed room! Normally you could make a room out of 6 brushes, but now we'll split up these 6 brushes into trangles. The more triangles you split it up, the more detailed you can make your rocks/ground, but the more the r_speeds of your map will rise! I personally prefer triangles of 128x128 pixels. Ofcourse the wall has to have some sort of rock texture and the ground some sort of sand texture. When you plan to make a cave, you should also split up the ceiling brush. When you want to make an outdoor mountain scene, you can simply keep the upper brush and put the SKY texture on it. I've chosen the latter for this tutorial. You should have something like this now (I selected some brushes to show how you should have built your triangles) 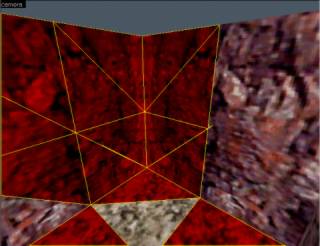 We're now going to bend the upper row of triangles to the outside, to give the rocks a more natural look. Select the upper row of triangles from one side. When you've done this, click your selection twice to be able to bend it. Now bend it backwards with a shear of about 80 (might be negative). Do this for all 4 sides. You can vary the shear with which you bend each side to give the rocks a more random look. Your map might look something like this now: 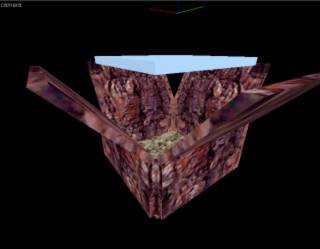 Now comes a tricky part. As you can see on the above screenshot, we have created 4 empty spaces in each of the 4 upper corners. As you can see these have a triangular shape. You now have two options: I've used the latter option. See the following screenshot for the details. Ofcourse you'll have to do this for all of the 4 corners.

We still don't have a map here which looks like an natural looking mountain/rock scene. But what we do have is a perfect situation from which we easily can create such a natural looking mountain/rock scene. The only thing you now have to do is select a couple of brushes which all share the same set of vertices. First take a look at the following screenshot. 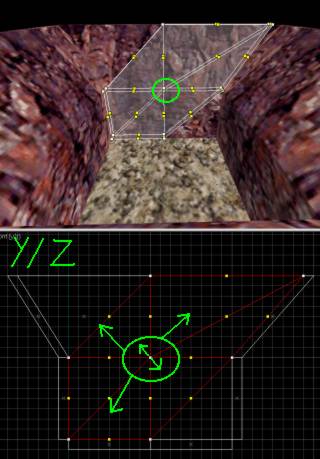 The set of vertices selected in the screenshot can be moved to all possible directions without (!!) causing invalid brushes (ofcourse as long as you don't 'invert' the brush which is always an invalid brush). You also can move it on the x-axis, which gives it a more natural look. But as long as you select all of the brushes around a certain vertex, you can always move it as much as you like. Now experiment with it! Don't exaggerate your vertex displacements, since that won't improve the 'natural' look you want for your map.

Now it's time for you to play around with this technique. But before I quit I want to tell you the following:

Now download the tutorial map, have a look and enjoy! Please note that it took me no more than half an hour to build the tutorial map! The technique is very simple and very fast. I hope you soon will be able too to build good looking rocks and desertgrounds which will not cause the excessivly high r_speeds! When you have problems with this technique, you can reach me at woprog@hotmail.com.
This article was originally published on 69th Vlatitude.
TWHL only archives articles from defunct websites. For more information on TWHL's archiving efforts, please visit the TWHL Archiving Project page.