That keyboard typing sound in the background was a bit distracting though, it was like your were writing the script as you were reading it haha

Hometown: One of the worst towns in Michigan, Snover

Dancing is a violating of human rights

Not voting for you at the next town council elections, Reverend Shaw >:(

(that's a Footloose joke for those that don't know)

Age: 28
Hometown: An island on the southern part of Australia
Relationships: No GF since 2014, homeboi!
Occupation: UX Designer for a software company
Current goal(s): To live in a house with many books, vinyl records and art. To watch the sun set over it all and be at peace.
Politics: Central. Anti far left, anti far right, anti identity politics.
Religion: Christian. Faith in what is transcendent is profound and deeply personal and goes far beyond the "ancient storybook/invisible sky monster etc" cliche people use.

Food: I've recently been a big fan of Eastern European dishes, thanks for Life of Boris off YouTube.
Hot drink: Nice cup of tea... Nice cup of coffee. Black or white, whatever.
Cold drink: Nothing specific comes to mind.
*Snacks:*
Books: Heart of Darkness, Brave New World, Stoner (NB 'Stoner' is the name of the character :P), Clockwork Orange, Catcher in the Rye. Really like but haven't finished yet: The Odyssey, The Gulag Archipelago.
Movies: No Country for Old Men, Apocalypse Now (both which helped me understand life), Taxi Driver, The Thing, Pulp Fiction, The Thin Red Line, Romper Stomper, Mad Max, Kill Bill (well, most Tarantino films really)
Videogames: Mafia 1 is a personal fave for storytelling, Fallout 2, Interstate 76, HL, Hidden & Dangerous 2, Far Cry 2, The Sims, Rome Total War, Morrowind. Had a lot of fun with PUBG last few years.
Music: Used to listen to tons of hardcore punk (ie. Black Flag) but recently more synthwave and some fuzz rock (Truckfighters go off). Reggae for cooking music. Surf music for atmosphere. Big Jimi Hendrix fan too.
Other: Other favorite things? Hey you should check out the Beastie Boys play Sabotage on David Letterman. Its on YouTube, pretty cool. Or otherwise theres Santana playing Soul Sacrifice at Woodstock (also on YouTube), what a jam.

Food: Coriander. Tastes like dish washing liquid (did you know dislike of coriander is due to genetics?).
Hot drink: When you make a black coffee and put like 5 sugars in it.
Cold drink: Grape fanta and sarsaparilla
Snacks: Pass
Movies: Any generic superhero movie that's released these days...
Videogames: The ship mission off Solider of Fortune 2.
Music: Pink Floyd and The Eagles. Rush is overrated too.
Other: Pass again

NineTnine
Posted 10 months ago2019-12-26 04:57:59 UTC in TWHL Tower 2 Post #343506
1. create a rough 'office' map you don't end up polishing because you're distracted over some life events at the time
2. slap down a heap of 'trigger_multiples' on some 'scripted sentences'
3. send 'finished' map to urby and have him fix the door trigger that you couldn't figure out

Behold, a meme is born.

Funnily enough, there was a floating scientist gimmick behind the window in the map that I don't think people actually noticed when they entered the room.

Because literally everywhere else relating to Half-Life these days isn't enough for you?

Heck even I was surprised how much of a meme it became!

I think masculine traits are very positive and can be used to counterract evil, internally and externally.

Someones been listening to the Peterson!

Masculinity is not 'toxic' and I wish people would stop saying that. Femininity is also not 'bad'. They are both wonderful things and compliment each other.

The issue is is that men need to be taught how to properly harness their masculinity and use it positively. Guys need role models and unfortunately not everyone has that in their life to guide them. Jordan Peterson has turned a lot of guys around through by his words and is the perfect example as that kind of role model.

NineTnine
Posted 2 years ago2018-08-17 11:54:08 UTC in Competition 35: Vanilla Half-Life Post #340574
hey now jeffy, hold your horses just one minute what I meant was while the plant models may be in game files I don't recall anywhere in the HL campaign where they show up (but then again I havn't played the SP campaign in a long time so I could be wrong)

NineTnine
Posted 2 years ago2018-06-15 02:36:55 UTC in TWHL4 Discussion / Bug Reports Post #339919
Yep, well these are just suggestions you could experiment with to see how can you hone the visual side of it. The blue is still a good colour, but I find trying to contrast blue and orange a little tricky in a pallete. You could try a different shade of blue, such as the "update preview" button colour maybe... But saying that, the blue does work pretty good on the smaller text links I think.

NineTnine
Posted 2 years ago2018-06-14 11:06:04 UTC in TWHL4 Discussion / Bug Reports Post #339917
Some CSS suggestions I had a play around with in the console. Mainly try and keep consistent with the orange, make sure border colours are the same. I still think the heading text should be smaller too

On the main page I'd probably have map vault after the forum too. Had some ideas on layout changes I might pass through later on if I get a chance. 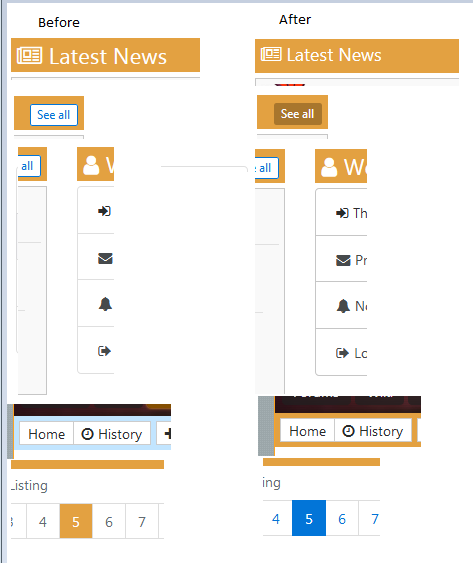 I think Bethesda did a really good job of transferring a game world from overhead 2D to first person 3D ( F3 or NV and maybe 4 too (havn't played it) are really good games) but so much was lost in that process. F1 and 2 had a very bleak and often brutal atmosphere to it. Just a sense of hopelessness. Even the music had this weird neo/primitive/industrial tone to it.

There were things in the Bethesda Fallout games like the pre-war slapstick undertone and music, the over saturation of stuff like Nuka-cola, the patriotic themes, the "cash register" sound effect when you find new location... That wasn't "fallout" to me. While plenty of that stuff was in the originals most of it sat subtle in the background whereas Bethesda took a lot of that stuff and amped it up way too much. A lot of people started on the franchise at F3, which is understandable but they didn't have any expectations from the older titles.

Like Satch says, went into Doom 3 after playing the originals and was disappointing. I didn't play a whole lot of the originals before I played Doom 3 so I went in fresh and as a result, I LOVE Doom 3 but maybe because I didn't have any expectations from older titles?

NineTnine
Posted 2 years ago2018-06-12 10:43:38 UTC in E3 2018 Post #339893
How I felt after hearing Fallout 76 was announced and continue to witness a franchise I cherished from Fallout 1 and 2 become more and more warped with each installment, a changed animal from the love I first remembered, slipping through my fingers:

The 'see all' button I wouldn't have as white/blue because its not a very good contrast against the orange theme (maybe have the background as a darker orange, #a57022, foreground #fff and get rid of the border. Maybe hover background a darker orange again?)

I could do a review and make a list of css changes I think would be good, if you like PB but I don't want to rain on your parade either if you've deliberately set it like this, so just say

If someone knows the name of the person who made the model tell me so i can give the correct credits.

Pretty sure this model is from the Azure Sheep mod

All that little interactivity!
Turn the lights off on the scientists and they get upset with you, how good was that for 1998

Mind you, I never played F4 but it seemed like a real departure from 3 and NV, and those games were depature enough from 1 and 2

We've Got Hostiles was awesome because things ramp up when I didn't think they would after Office Complex and seeing the army guys for the first time created a whole new dimension to the game. Little things like hearing the vocal announcer explain the military has taken over the systems... awesome!

Not sure what the designer's idea was behind Gonarch was, but its voice sounds were pretty freaky, as well as the music track that played.

Not to be that guy, but I believe that it's "Nice hit"

oh now it makes sense! Well anyway, even if its 'nice hit' I still think 'I see it' was kinda cryptic and cool

Apprehension had the super scary bit where you walked over those breaking platforms over the water while the sea monsters wanted to nom you up...
And the first fight between the assassins which ended with:

But yeah going QE but only just.

The dam, the tank battles, the alien/grunt crossfires, the headcrabs hiding in the sand, the garg at the end with the mortar controls, the cliff face bit, the snipers

how isnt it the best!

Nothing like having all your weapons taken away mid game and starting over - shook things up a bit.

NineTnine
Posted 2 years ago2018-04-08 06:56:28 UTC in Best Half-Life Chapter Tournament Post #339246
On a Rail is where its at cos Barney died in Blast Pit and you couldnt save him even after he gave good advice on sneaking.

NineTnine
Posted 2 years ago2018-04-07 07:45:41 UTC in Best Half-Life Chapter Tournament Post #339235
Forget About Freeman, the story telling of seeing from the Marines how they were failing in their operation was done really well, especially after the chaos of Surface Tension. Also because this chapter conveys this theme in overlapping into the early chapters of Opposing Force too, which was done really well.