Currently, the topic of consideration is the forum. Are there any extra features you'd like in the forums? anything that needs fixing?

take note that already we have:
-posting redirects straight away to the thread it was posted at
-similar with thread posting, thread editing (for mods), and post editing.
-image stretching has been stopped

if nobody has any suggestions we'll move onto tutorials and map vault.

Also, we're going to have emoticons in the map vault, right? If not, we should.

A better pageing system.
The one we have now sucks.

There should be a last page and a first page button 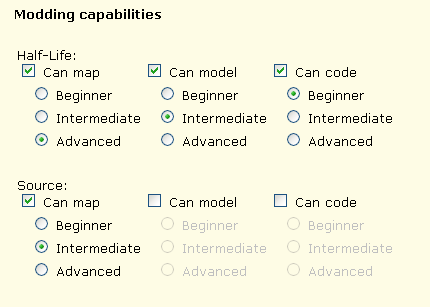 I know it hasn't been long, but the magic bbcode buttons are done.

editing the first post will not be done until i get code done to alert admins they they have to check an edit.

bumping after an edit is another story. will be tricky, if not impossible to do without changing the original time of the post.

and muzz.....i've seen that at least three times before, and you'll be happy to hear that no code at all has been done for the user profiles.

but most likely it'll be in there.

still taking suggestions for the forums. so far they've all been great ideas.

Basically says "Quote from Penguinboy" in the

In the event a few people want to collaboratively make a competition entry, they all get shared glory.. So, rather than a single person getting the first place award, all of them get "first place shared" awards.

This is a bit optional I guess.. but it might encourage compo entries from those too "eh?" about their mapping to make an entry on their own..

last call, the forums will be declared complete soon.

Can the Individual map earn awards like the MotM. The way it looks now, you can only earn a MotM once. Its just a thought.

Penguinboy
Posted 12 years ago2007-12-10 11:44:24 UTC Post #240491
MOTM system will completely different in TWHL3. votes will not be made, the MOTM will be judged by the rating of the map in the vault. maps get the awards instead of the user, but it will be acknowledged in some way in the user profile, but not in the form of a big award, because the user is allowed to get more than one MOTM.

I often log in from either OS, and it treats theses as two separate computers, meaning I need to log in again every time I switch from one to the other, and then when I switch back as well.

It's not really important, I just think it would be nice.

(No one noticed my Eli Vance smiley

Blitz: That's been on the cards for years, so yeah, it'll be here.

Map view page is about 80% done, design wise. Overall, the Map Vault design is around about 70-80% done, it just needs PHP now.

Speaking of the Vaults, Yay or Nay on the Model Vault?

As for the 'Resource Vault'
It should have the same Size limitations as the map vault. I.E.: If over.. 1mb, outsource to remote download..

Im sick of posts like "IT LOOKS DARK 4 STARS LOL"

It's fucking with the ratings when dumbasses don't actually PLAY the map.

srry
Posted 12 years ago2007-12-10 20:56:07 UTC Post #240533
Biltzkrieg, that'd be a great idea, but there's no way to implement a system like that unless you make map downloads unavailable to people who aren't signed up to TWHL. Because if you weren't logged in when you downloaded the map, then what, are you going to just be forced to download it a second time to review it?

About Tetsu0's idea though... I really don't like it. I don't think it should be counted as a login if you're already logged in and you open TWHL, the way it is now, but people may actually log in more than once per day. The other problem with his idea is that everybody's "Logins (per day)" would drop to 1...

I think it should be a counter of how many times the person has physically typed their username and password in and hit enter, not how many times each day they happen to visit the site.

Penguinboy
Posted 12 years ago2007-12-11 00:47:10 UTC Post #240568
with the new TWHL3 cookie system i've already created, it will:
-remember over multiple computers
-never log you out by mistake
-if you've spent ages writing a huge post and timed out of the login, it'll log you back in and post without throwing an error and annoying the hell outta you
-only be deleted if you log out or change your password

Penguinboy
Posted 12 years ago2007-12-11 00:57:39 UTC Post #240571
Back to map vault suggestions please. btw, theres absolutely no way of making sure the user clicked the download button, as srry explained. also forcing users to login before downloading the map is annoying, and the only method of forcing downloads before rating is slow and clumsy.

I'm hoping the MV Mods will be a little more proactive with their work in the new Vault, which should weed out those kinds of ratings. Besides, you know that you can't rate without posting a comment, so it should be easy to see what's going on.

Update: New map vault code is currently being implemented within my design.

Keep in mind guys that TWHL3 is completely new: there's not one trace of the old PHP in there at all, not even Seventh-Monkey's more recent additions to the site (i.e. Mercutio). The only thing we're using is the existing databases and I believe we've made changes to that as well.

hurry up and suggest or the system will be exactly the same!
suggestions for map vault or tutorials only at this time please.