You've got a little bit more time for this one, (eight weeks from right now) with the chance of it being extended further if the need arises.

Instant Mix
Posted 2 years ago2020-04-28 10:12:04 UTC Post #344151
I've been trundling away in the background and have been posting wee bits in the WIP section in discord. There's definitely a couple of other people working on this as well from what I can tell

UrbaNebula
Posted 2 years ago2020-04-28 19:11:45 UTC Post #344153
This is actually one I would have loved to make a map or series of maps for myself. Likely would have gone for a mini-mod starring a uniquely skinned and fully voiced Barney, but there is no way I have time for that. Maybe I will revisit the idea once The Core is out of my life.

I have been lurking a bit here recently though. Did some work for the teleportation competition a while ago, and later for TWHL Tower 2, but I didn't have enough inspiration for the first, and ran into some technical issues for the second. But this time I've got a clear picture of what I want to make, so I felt I was ready to post something. 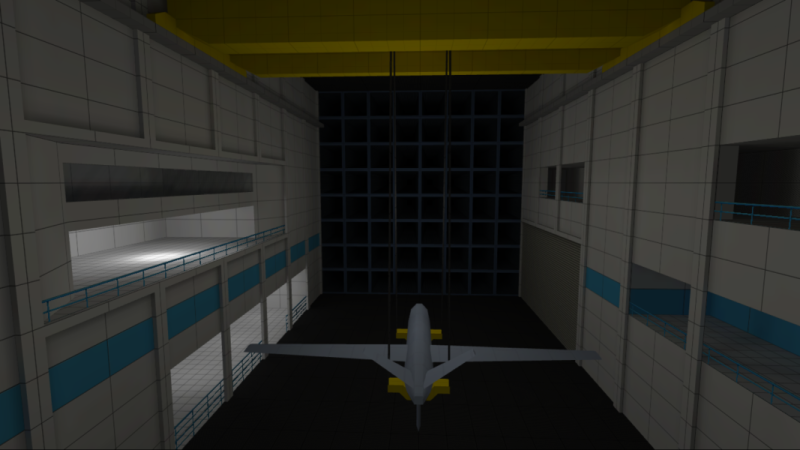 I'm going for a high-tech test environment style. The main room here is mostly done in terms of layout and coloring. Next step is to create a few additional rooms, then some scripting to get the main gameplay up and running. Then it's time for lighting and texture improvements, and maybe some finer details, depending on how much time I've got left.

Quick question regarding the rules; one of them was that no vanilla content must be overwritten.

If I submit as a mini-mod with some custom animations for certain stock HL characters and enemies, is that acceptable? Technically nothing is altered about the vanilla models on one's hard drive if it's done that way, as far as I know.

Also great that I now know how to package mods, exciting stuff

Obviously thought I'd check whether I have that "extra" day or not since it makes a big difference. If anything I think I may have to cut some ideas haha!

Cheers all. Hope your entries are going well, I look forward to playing them (while simultaneously praying my mini-mod format works).

...and done. With less than an hour to spare. Phew.

Really nice brush work in your main room there Captain P, I almost thought it was Source when I went back into the maintenance halls. Kind of like the vibe you get in Stanley Parable and Portal. Though I got minor PTSD imagining the potential leaks and grid issues when doing the curved propeller wall and the curved line on the floor, lol.

Now get in there and vote like it's November 2020 or something...

The detailing/lighting might have been bland, but the actual gameplay of it was really interesting. It actually made me feel like a squad leader, taking care of my boys and having them take care of me. Every element of the maps felt very deliberate, and the setpieces were damn cool. Reminded me heavily of how Valve might design a HL2 level.

Might've been a little glitchy at spots (but that's just half-life's AI at work) but it was a really cool entry. Especially impressive how many maps you fit in there in such short time.

Captain P
Posted 1 year ago2020-06-03 23:12:27 UTC Post #344359
I played through all of them, twice now. I'm impressed by just how much more content the other entries provided! hermanJnr.'s entry had some good surprises and cool sequences and generally worked pretty well. Burnerman56's entry had some good scenes and ideas as well, including good use of music and a few secrets sprinkled around, but relying on HL AI to stay alive long enough with so much combat is a risky thing and can result in some frustrating moments. Either way, I think both entries stuck to the theme very well, with a good balance between giving and receiving help.

I made some more notes so if any of you is interested in more detailed feedback (or if you want to give feedback on my entry), feel free to PM me.

@hermanJnr: the curved wall was done by creating a small and large cylinder, then vertex-manipulating tetrahedrons to line up with them. A bit tedious but fairly safe. The curved line was just a func_detail, so no risk of grid/leak issues. The lighting in the maintenance halls was mostly a combination of texture lights and chamfered edges to soften the transition between light and dark. I don't know how much of a difference Vluzacn's compile tools made compared to Zoner's, but from what I read it does come with some lighting improvements, so I think that helped as well.

A bunch of really great entries for this one, and I'm impressed at the amount of content you put out given the time limit.

We all know how capable Captain P, that goes without saying. The map itself wasn't really about a "buddy" helping you out during your adventure though, at least this is what I gathered from the goal of this Compo. You push a button and your buddy, the fan, helps you escape while Burnerman's entry was all about you escaping with your fellow soldier(s).

hermanJnr's entry was the undisputed winner for me. It is basically a minimod with custom animations and voice acting. Mapping was a little basic but some setpieces like the warehouse battle made up for it.

Congratulations to everyone involved.

UrbaNebula
Posted 1 year ago2020-06-09 11:41:27 UTC Post #344382
In my opinion, I would agree with that. I tend to write the summary of each map based on how the voting went. Personally, I'd say Captain P's entry is great, but in terms of the theme of the competition, it was my third place compared to the other two.

hermanJnr definitely deserved the win and I'm happy to see that others agreed with me as such.

The first ever project I have managed to finish, it was actually good having the time deadline because it made me take it to completion rather than having ideas and leaving them hanging. Learned a ton too.

My brushwork was definitely a little rough and basic because I was rushing so damn much towards the end, haha! I almost had to cut the warehouse showdown, but I'm really glad I managed to finish it instead. There are a lot of rather flat ceilings and walls to be sure

I really liked the creativity of Captain P's entry and I was rather impressed by Burnerman's brushwork. The scene where you herd the Engineer into the rail lift and it carries him through the canyon was neat in particular.

Learned things from playing through both those entries too. Bravo to everyone who took part.