What is a 3D Skybox?

The Source engine has a lot of new features for mappers. One of these is the 3D skybox. 3D skyboxes enable the mapper to make the map to appear bigger than it really is - without increasing the compile time significantly.

How does this Work?

The basic concept of a 3D skybox is that the skybox texture around the main part of your map displays, instead of a sky texture, a 3D environment seen from the point of view of a sky_camera entity. The sky_camera is inside its own 'minimap' surrounded by the skybox texture. The minimap is only 1/16th of the size of your normal map. it can contain whatever the mapper wants, for example entities, brushes, displacements or models. When compiled and played, the 3D skybox is scaled up by 16 so it appears to be full sized. Because its so small, any increase in compile times are minimal. For an example of a 3D skybox look at de_dust2 in Counter-Strike: Source. 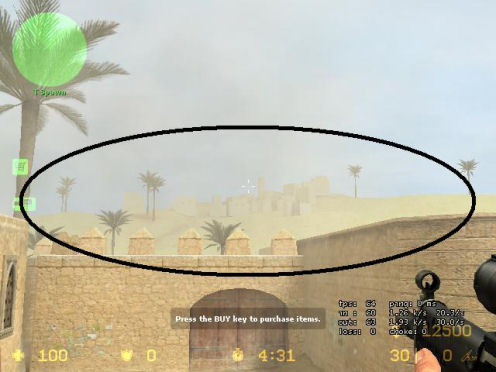 These buildings and trees... 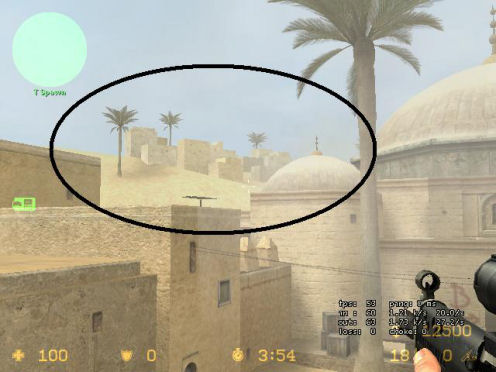 How to make a 3D skybox

Step 1: Make your map
Obviously, a 3D skybox is only useful on outdoor maps, otherwise you wont be able to see it. For the example, I will be making a very simple map consisting of a floor with low walls all the way around it. IMPORTANT: Make your map around the co-ordinates 0,0,0. THIS IS VERY IMPORTANT! Your map must contain the 0,0,0 point. If you look at the grid in Hammer, you should see two very faint green lines, one going horizontally, and one going vertically. Where they meet is the point 0,0,0. 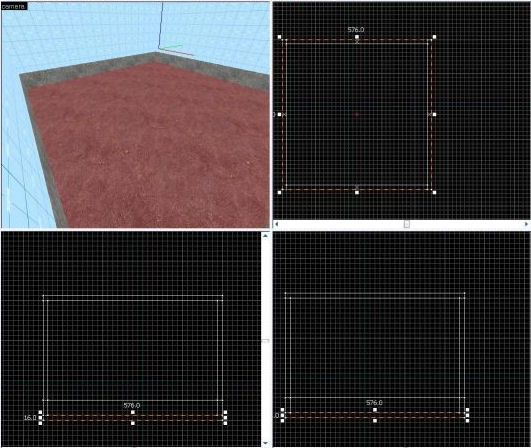 Starting with an empty room...
Step 2: Place the entities
There are 3 entities that are nescessary for your 3D skybox to work:
1. info_player_start (anywhere)
2. light_environment (anywhere)
3. sky_camera (at 0,0,0)

It is very important that the sky_camera is placed at 0,0,0 or your skybox will be off-centre. 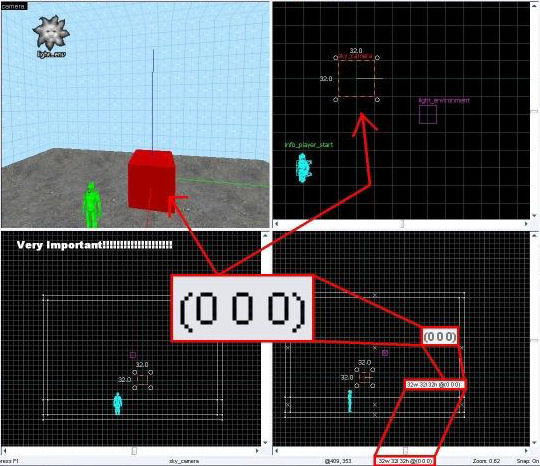 add the entities.
Step 3: Reference Brushes
This is why I placed the walls around the floor. You need to find some brushes in your map to use as a reference to build your skybox around. Outer walls are usually the way to go - and sometimes the floor so you know high to make the skybox. Select the reference brushes and the sky_camera, hold shift, and drag it out of your map completely, making a copy. Keeping everything selected, go to tools -> transform, select the 'scale' radio button and type '0.0625' in all 3 x, y, and z text boxes and click OK. You should now have a very small version of your reference brushes, as well as another sky_camera.

Make sure you don't move the reference brushes or the sky_camera from now on. This sky_camera is the main one - it has to be in the right place as it is in relation to where 0,0,0 is in your map.

Step 4: Make the Skybox
For the example, I'll just make a simple skybox, but it can be as complex as you want. Use a brush or displacement for the ground - I'll use a brush. (you can uncheck the entity visgroup so you can work around the sky_camera). I've also put a nice road down (texture scale is 0.0625).
Next, some models. Don't use normal models unless you want a massive dumpster or something. Only use models with '_skybox' on the end. I've just gone into props_buildings and selected a few of the _skybox models. Remember: models are not necessary, but they add a nice touch. You'll be using the prop_static entity for stuff in the skybox. Also: Finally, surround your complete skybox with the 'toolskybox' texture. This will show the skybox texture in-game. 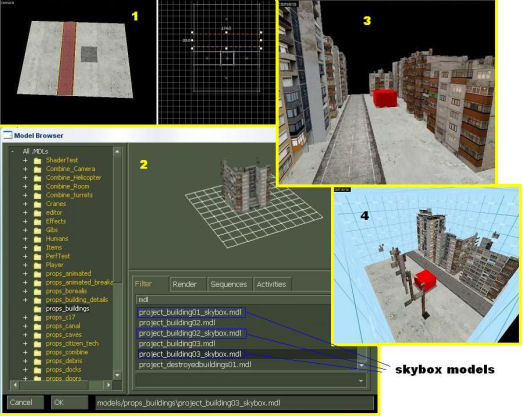 Use Skybox models to build your skybox.
Step 5: Finishing Up
These two steps are important:
1. delete the reference brushes from the skybox (or visgroup them)
2. delete the sky_camera from your original map (the one at 0,0,0) (or visgroup it)

Compile and gaze at your new 3D skybox! 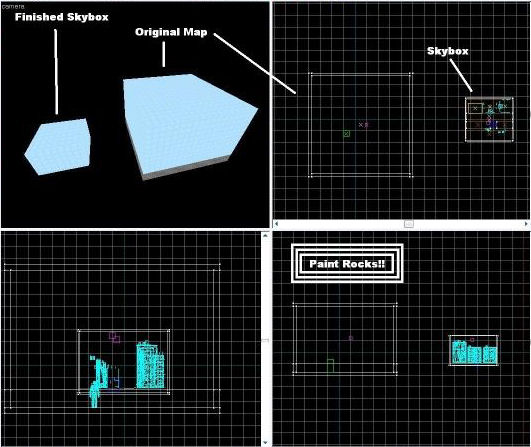 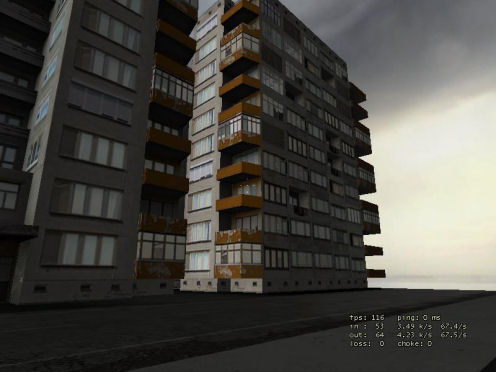 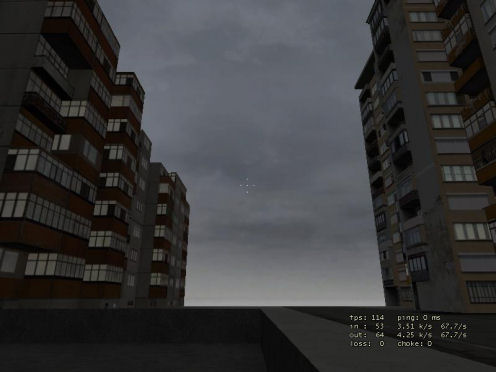 Of course, this example skybox is very basic, but the theory can be used in very creative ways. For example, say you were mapping a very long bridge. You could map the whole thing, and scale half down into a 3d skybox and make a level change to reduce lag. Also, the sky_camera entity itself has some useful properties including fog in the 3d skybox, and an option that lets you change the scale of the skybox - the default is 16.

Skybox scaling can be very finicky: sometimes you'll notice that the scaled down stuff is off the grid, thus preventing you from lining up your skybox stuff properly. The most commmon area where this is a problem is the creation of seamless water. Here's a way to do it that can save you strife. By doing it this way, you can easily make it look like your map extends for ages and ages.

Sorry noob (new to source mapping) question - hard to see in the picture - you have the floor and a wall? then the skybox touches the walls completely? Seals map preventing leak? Then when in game the sky you're seeing the image from the little box is this correct?

How does doing it this way effect compiling times? Do you know?

Kill_the_Bug
Commented 13 years ago2008-09-24 20:37:25 UTC Comment #100751
Sorry, Can't edit the post above - Can the wall that it connects to be a displacement that has a jagged edge on it? - ie skybox - overlaps the displacement so it fills the valley areas of the displacenment.

If i want to add displacements to my 3d skybox, do i add them before or after i shrink the whole thing down to .0625?

I also found "rounding" the outer edges of your 3dskybox makes it blend with the sky textures very well, i.e., you don't see a square on the horizon if the player is able to get up somewhere high to see the horizon.