"Beam me up Scotty!"

Teleportation, wouldn't that be cool. No more driving, just enter your destination and away you go. It is not available in real life, but it is in game development. Adding teleportation is an easy accomplishment in Half-Life, which has many uses. Things get more complex when adding triggers, multisource's, and multi_manager's for effects.

This tutorial assumes you know the basics of Hammer or World Craft. Making
brushes, assigning them to an entity, and creating entities. Other than that, I am attempting to be as detailed as possible, so new Mappers can follow along.

As stated before, trigger_teleport is a brush-based entity. So, make a brush where the teleporter is to be and tie it to the trigger_teleport entity. The only thing that must be set is the Target, which is the name you plan on giving info_teleport_destination; I used tele_dest1.

Now, use the Entity Tool to place the info_teleport_destination where you want the player to end up. Be careful not to place the entity too close to any brushes. It would be a shame to stick the player into a wall, desk, or other solid form. Set its name to match the Target you gave to trigger_teleport; again, I used tele_dest1. Now you have a working teleporter.

Now to add a little bit of complexity to teleportation, by controlling the teleporter through a switch. Here we will turn the "machine" on and give the player five seconds to use it before it deactivates.

Create your entities as above and add a multisource and func_button to your map. Set the values as follows:

The names used above are those I used in the example map, like everything else you can use your own; just be sure they correspond with one another. Compile the map and you have a triggered teleporter. 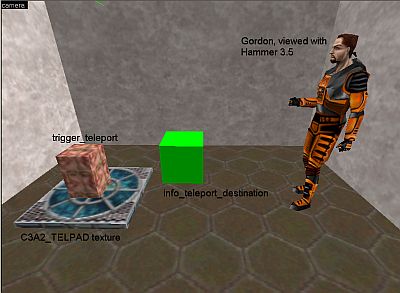 Half-Life gives you the tools to come up with creative ways to initialize your teleporters. With some experimentation and imagination, how your machine is initialized and where your player goes has unlimited possibilities. Ambience, lasers, sparks, and other features can be added and manipulated with the use of multisource and muti_managers. Eventually, I will update the example map to demonstrate this, but till then combine other tutorials and play around.

ZPhugeFan
Commented 6 years ago2015-11-22 08:14:05 UTC Comment #100576
Nice tutorial. I may not be new to mapping in general, but i'm still having trouble fully understanding multi managers and multisources.

gastenoise
Commented 2 months ago2022-05-09 19:23:18 UTC Comment #104399
Hi jamie! If you use a newer hl1 .fgd the info_teleport_destination will appear in the entities list like normal. BUT you can just use an info_target entity for the destination, they work the same way.