Ever had a map that has so many confusing, cramped, or criss-crossing lines it looks more like a game of pick-up-sticks?

Well, my friend, you need VISGROUPS!

Visgroups are the best way of organising your map... A means of grouping objects, while still being able to edit them individually! You choose which groups you want to look at, and those you don't! - Simple!

Looks simple now, but imagine what that'd look like with tonnes of detail and more rooms...
Here we have two simple rooms joined by a hallway. Supposing you wanted to select the green room using the front view? You can't do this easily because you may instead select the room behind, or both. To solve this, we're going to assign each room to a visgroup. We can then make the visgroups we're not using invisible, allowing us to focus on either without any chance of interference!

First, select one of the rooms. We then assign it to a visgroup by clicking the Hide Selected Objects button, the one with a red-dotted cube, as shown. Poof! It disappears from sight! 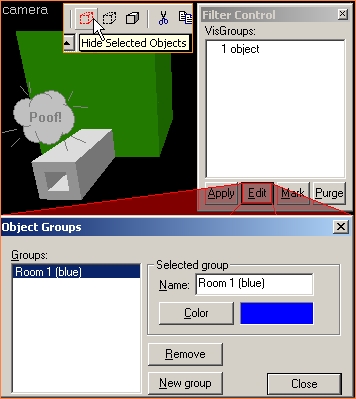 Just like MAGIC
Now let's find it and bring it back. Look at the Filter Control Box. At the top, the words 1 object has magically appeared. That's the visgroup we have just created by hiding one of the rooms. But the name (n) objects only tells us how many objects (or groups of objects) we just visgrouped. We're going to change it into something a little more helpful.

Click the Edit button to bring up the Object Groups Box.

Here we can change the name and colour of our visgroups. Just select the visgroup, then rename and colour it using the box beside. You may have noticed that the colour changed automatically when you visgrouped, just like it does when you group objects normally.

Ok, now see if you can visgroup the other one yourself. We should now have two visgroups: a Blue one, and another one. As you can't see, both are hidden. Time to unhide them!

On the Filter Control Box, just click slightly to the left of each name. A pointer will appear for each. This is how you select which groups you want visible. Click again, and the pointer will be hidden, like the visgroup. Now click the Apply Button to apply these changes. Poof! The visgroups with pointers beside will reappear!

A good way of selecting an entire visgroup, especially if it's strewn about the map, is with the Mark button. First, highlight the visgroup, Room 1 (Blue) in the Filter Control Box, and then simply press Mark. Now the first room will marked in red for you to drag about the map. Done that? Good.

Now what about that hallway? Let's put it and the second room in the same visgroup. After marking Room 1, just ctrl-select the hallway and select theHide Selected Objects button as before. You should see a new visgroup appear, and the old one will remain - But - the old one is now empty! See for yourself! Select the old Room 1 (blue) and mark it. Hmmm... nothing selected. There's an easy way to get rid of unused visgroups: the Purge button. Press Purge and watch those obsolete visgroups disappear!

If you just want to group two visgroups, there's an easier way! You can combine them: have one visgroup literally absorb the other! To do this, click one of the groups and drag it into the other.

Now to remove the remaining group, and wrap-up this tutorial. Remove groups by dragging them out of the Filter Control box. Destroying a group does not destroy objects, just like destroying objects does not destroy a group. They simply become disassociated. Notice that the two rooms and one hallway are still there, and TA-DA! We're right back where we started! (besides a minor colour change)

Some points on storing visgroups: Visgroups are only saved in Rich Map Format (that's .rmf). It means they are not exported with a .map!

And now for some visgroup trivia:

In VHE (v3.4 at least), the recorded top-to-bottom order of visgroups is reversed every time you save your map! Weird, huh? So much for organisation!