Tutorial: The Osprey History
See all pages See all uploads See all categories

The Osprey was a cool idea, but it doesn't help that it's so difficult to get it looking right. But first, what is it? Take a look: 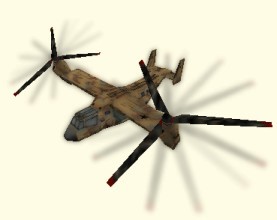 The Osprey
It's one of those cool helicopters that can turn itself into something more like an aeroplane when it's going fast enough... but what does it do in half-Life? And how do you set it up?

It's job is to replace marines. When the map loads, it counts all the marines (monster_human_grunt entities) that are around, and when one dies, it attempts to replace it. All you really need to do to get it moving is a set of path_corner entities that work in a loop, one pointing to the next. The monster_osprey, when it's just flying around, will only use corners with speeds of 400 or above. Corners with speeds of below 400 will be ignored... unless it has to deliver more grunts to replace ones that get killed. In that case, it will stop at the next path_corner with a New train speed of 0, and a couple of grunts will swing down.

This is where it gets problematic: the monster_osprey isn't programmed to handle movement in the same way something like the Apache is - it moves from point to point a bit like a regular func_train, without banking or turning, unless you carefully set the corners up.

A good tip is to create the corners in a circle by arranging more than one path_corner in a pattern something like in the shot below:

Aim your paths
The more path_corners, the smoother the turn will be, but I've only used three, which just about works. Giving the corners small pitch and bank values and keeping the speed low helps to enhance the flight realism as well.

Download the example map and have a look at how the Osprey moves. It could do with some more work, but it's better than without any angle properties.