Note: This tutorial is meant for custom mods. Do not replace client.dll in Half-Life\valve\cl_dlls\, or else you won't be able to play on servers, risking a VACation.

Let's admit it. Half-Life's view bobbing is not particularly interesting.
It goes forward, then goes backward, and the cycle repeats.

Take a look at Unreal, a game from the same year, that had nicer view bobbing.The viewmodel looks like it moves along the infinity symbol. We'll create something similar to it in this tutorial, but we'll also cover the Half-Life WON view bobbing, which was patched out roughly after version 1.1.x.x when TFC came out.

So, before we move to actually implementing that stuff, let's define some basic terms:

Viewmodel a.k.a. weapon - the 3D model of our weapon with hands on it, it's what the player sees.

View roll - the tilt, or roll of the head left and right, like in Deathmatch Classic and Quake, often as a reaction to the player's side movement.

View swaying - the change of view angles, often as a reaction to player movement. A more stale version of this exists in Half-Life when monsters punch you, called a "view punch".

View bobbing - the shaking or change of position of the view, often as a reaction to player movement. Half-Life has a subtle form of view bobbing, where the view goes slowly up and down as the player runs.

Weapon swaying - the change of angles in the viewmodel, often as a reaction to the player looking in a different direction quickly, so the viewmodel takes some time to reach the same direction the player is looking at.

Weapon bobbing - the change of position in the viewmodel, often as a reaction to player movement.

You will see various names for these across the Internet. Gun bobbing, head bobbing, and so on. Sometimes, this is all collectively called view bobbing. For the sake of this tutorial and precision, I defined these so you know what I'm exactly referring to.

Where it's at and how it works

Everything about view bobbing is inside view.cpp.
Functions that participate in the view bobbing are: The engine basically calls V_CalcRefdef, which is this: From the engine, we also get a pparams, or in other words, some variables about the player's state.
They are defined in ref_params.h We won't modify any of these yet in this tutorial, as we'll be modifying the weapon position & angles instead.

Let's start with the simplest one.

In view.cpp, go to around line 664: view->angles does not actually affect the angles of the viewmodel.
Unless it is copied to the viewmodel's current state.

Below the `view->angles[PITCH]` line, add the following: That's all. The one line that brings back HL WON view bobbing.
If you just want to download the finished DLL file, you will find that at the end of this tutorial.

In order to understand how view bobbing works, we (un)fortunately need to cover some basic trigonometry.
Precisely, the sin function.

A sine wave, where y = sin(x)
To visualise this stuff, I use GeoGebra. I really highly recommend it so you don't have to draw the graphs on paper.

In HL SDK, or to be precise, in the maths headers included by HL SDK, sin() assumes radians as the input, not degrees. 180° equals one π rad, where one rad is about 57°. But, we don't have to worry about that for now. We're not concerned about angles, but rather, the output of sin() for given values.

So, why is sin() relevant? Well, the weapon bobbing in Half-Life essentially works this way:
offset_forward = sin( time )
Since time is an always increasing variable, and sin outputs only values between -1 and 1, the weapon will always bob forwards and backwards.

So, let's try to recreate the infinity symbol pattern:

You might be thinking, how on Earth would you do this if the sine wave looks the way it does?
Well, here's the thing. You won't be using a single wave for this. Imagine that you will have one wave for the X axis, and one wave for the Y axis.

For starters, let's do this the old-fashion way. Let's analyse X and Y positions of the infinity symbol. 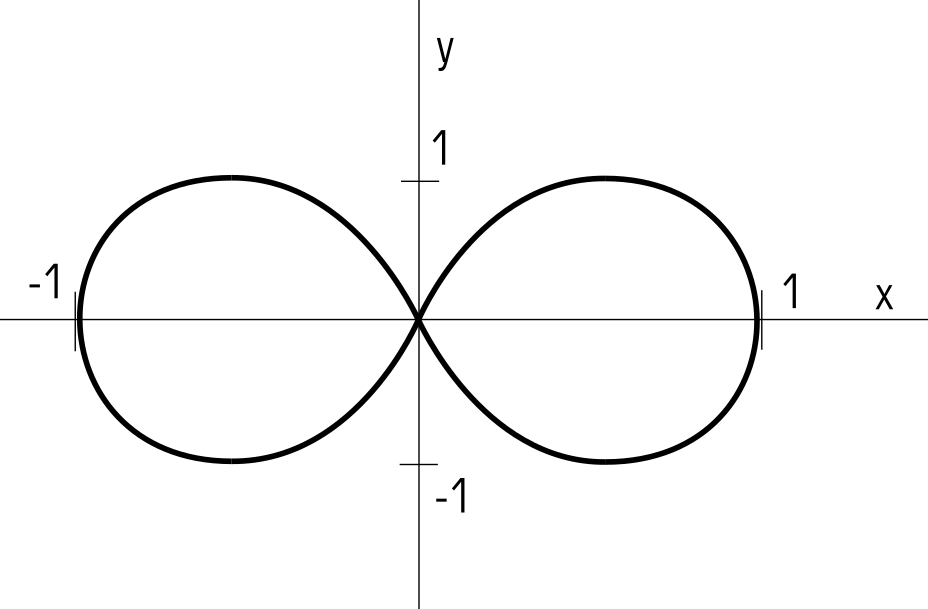 Our very 1st position will be the centre: 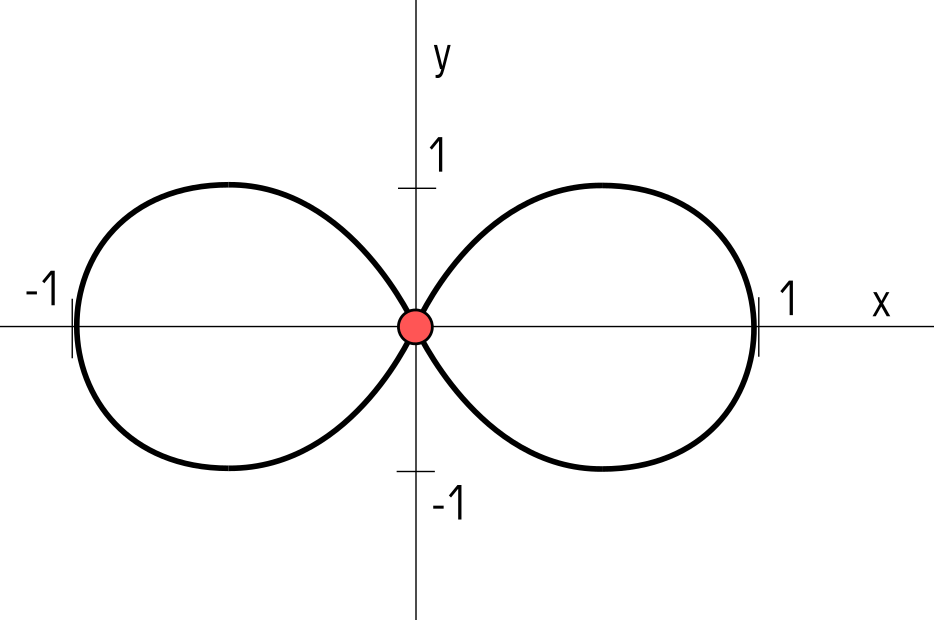 If we started moving forward in-game, we'd expect the weapon to move somewhere, for example here: 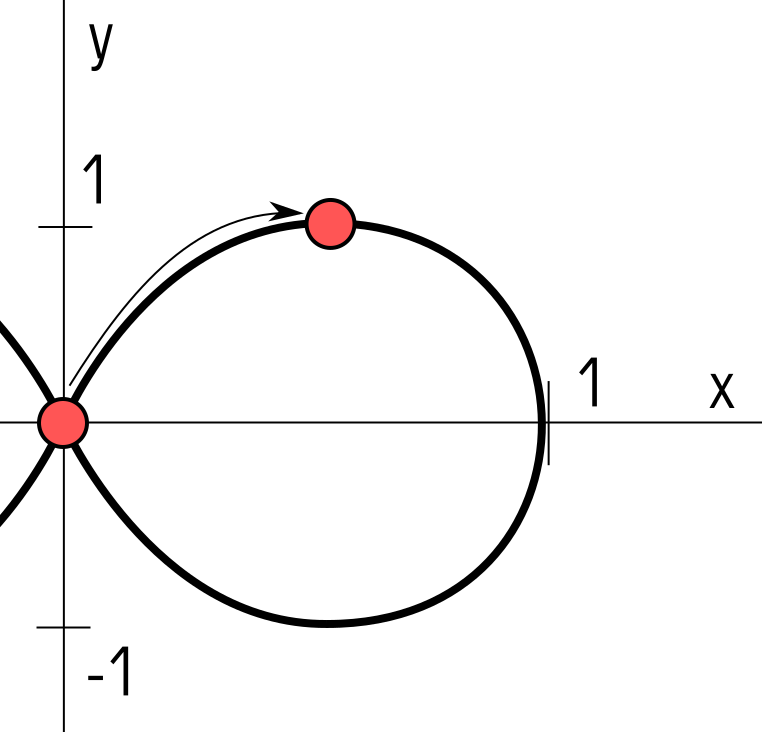 After plotting out all the important points... 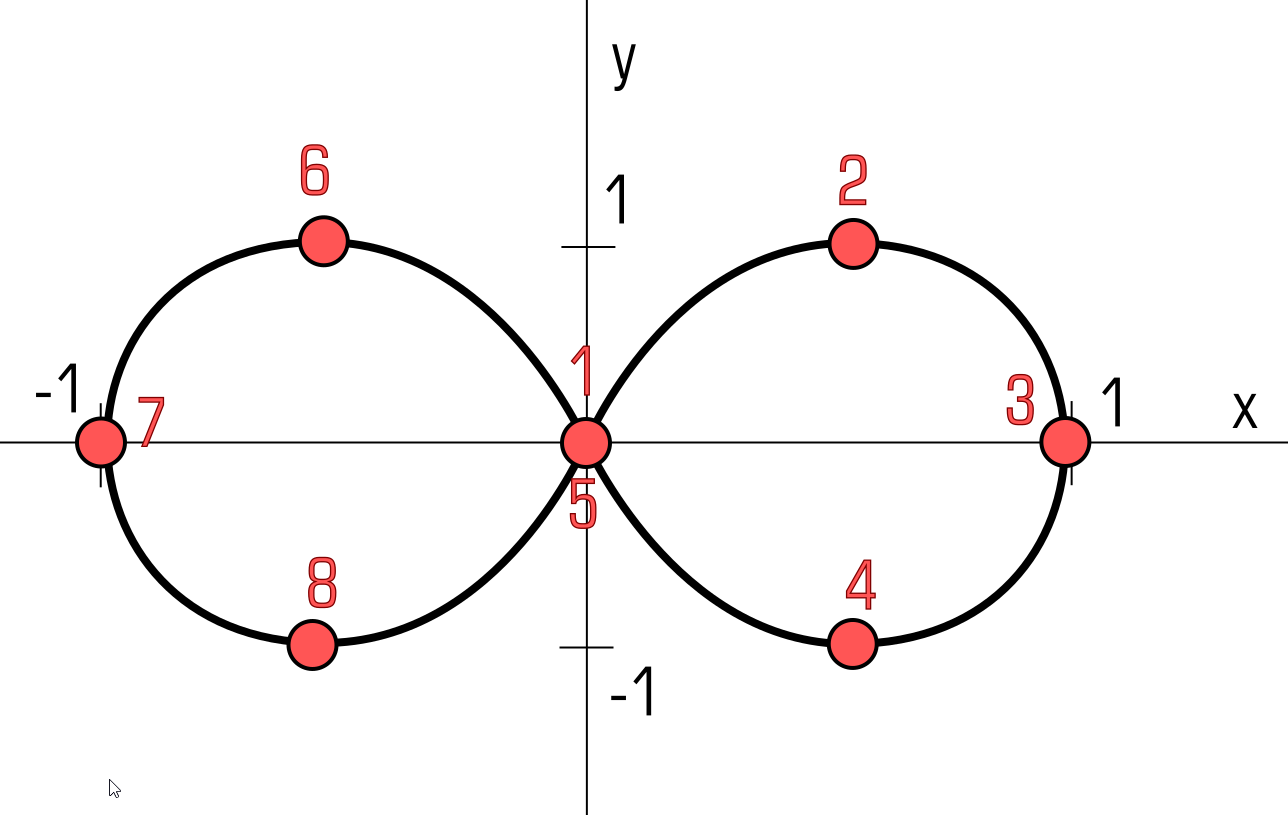 When drawn on a graph, it looks like this:

X is red, Y is green
Mathematically, this would be it: Let's define a point called viewmodel and assign it the coordinates sin(cycle) and sin(2cycle).
viewmodel = ( sin(cycle), sin(2cycle) )

GeoGebra is pretty useful for this stuff
Now, the only thing left to do should be to apply this to the viewmodel. However, it doesn't quite work that way in HL SDK. Instead, that's what V_CalcBob is for.

V_CalcBob is normally used like this:
float bob = V_CalcBob( pparams );
However, it has a constant cycle. We need to modify it to allow multiple cycles and bobs.

V_CalcBob uses sin() internally: A*0.3 + B*0.7 is a whole other topic that I'll cover in part 2 of this tutorial. It's a form of linear interpolation.
Either way, sin(cycle) is the heart of this very algorithm.

If you look on the right side, you'll see that the grey wave is about to go down, however, on the left side, it is going up.
This will cause a big issue with consistency and it may not look pleasant to see the viewmodel suddenly bumping up when it was about to go down.

The static variables on the beginning of this function hinder us from using more than one cycle: We will get rid of those. Delete those 3 lines and change the function's parameters, so that your V_CalcBob will look like this: I've also changed float V_CalcBob to void V_CalcBob.
This is because we'll be using the function like this from now on:
V_CalcBob( pparams, bobtime, bob, lasttime );
Since we're passing bob by reference, there's no need to return it any more, hence the function is a void one.

However, this is not all.
For extra flexibility, we'll add support for sin squared, cos and cos squared.
Above V_CalcBob, add this: And then modify V_CalcBob's parameters again: In there, I snuck in a variable called freqmod. This is actually gonna be the 'frequency modifier`. If the frequency is higher, then the cycle, and thus bob, will be faster.

Inside the V_CalcBob function itself, we will have to do a couple of more modifications:
Old:
New:
So, that's it for V_CalcBob. Now, IntelliSense is gonna start throwing some errors at your face, because V_CalcBob is being referenced in V_CalcNormalRefdef.

Apart from just changing the one call to V_CalcBob, we'll have to add some new variables.
Old:
New:
V_CalcBob( pparams, 0.75f, VB_SIN is essentially sin( 0.75 * cycle)

We kept the old forward bob, as you can see.
Now, you can notice that bobUp will go at 1.5x the speed of the regular cycle, and bobRight goes at 0.75x speed. They don't have to be 1x and 0.5x strictly, as long as the ratio is the same. After some experimentation, I found that 0.75 and 1.5 just works the best for this.

Applying the bob values to the viewmodel

Now, the most important part will be this:
Old: (around line 670)
New:
pparams has 3 vectors inside, which represent the forward, right and up directions relative to the player's view. So we use those to offset the viewmodel from our view.
If you did `view->origin[0] += bobRight` (which you shouldn't often do), you would be shifting the viewmodel on the world X axis, not the local X axis.

All that is for the weapon bobbing alone. Feel free to experiment now. Try different intensities, frequencies, formulas etc.

Until then, happy programming!
-Admer