VERC: How To Create An Airstrike History
See all pages See all uploads See all categories

This tutorial will lead you through the creation of an air strike table. What's an air strike table? you ask? It will allow you to target a specific point in your level and send an airstrike raining down on the targetted position.

The air strike is setup in four parts - a set of momentary_rot_button entities (part 1) that control a set momentary_door entities (part 2) that determine the position the func_mortar_field (part 3) will strike at when the func_button (part 4) is pressed. The entities are shown in the picture below (taken from Worldcraft's 3D view). 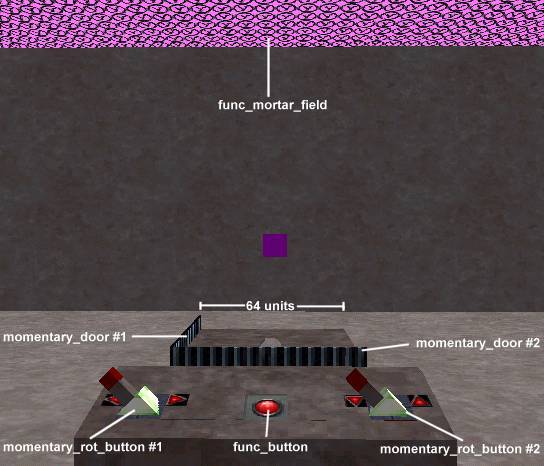 These are the X control devices. Set the Name (targetname) of the button to xcontroller. This will be used for reference later by the func_mortar_field. Set the Targeted Object (target) to xposition. Set the Name (targetname) of the momentary_door to xposition as well. The rest of the button's properties and flags should be setup as you normally would. The same goes for the door, except that you should set the Lip (lip) to a value equal to the distance it should travel. As shown in the picture above, the example map uses an air strike table 64 units wide. Finally, set the angle of the momentary_door to point in the direction opposite to the direction you want the door to move.

These should be setup the same as above, replacing xcontroller with ycontroller and xposition with yposition. If the air strike table is square, the same Lip (lip) value for the momentary_door can also probably be used.
Note: Something I've noticed is that using negative rotation values for the buttons may cause unexpected results with the momentary_door movement. If you're experiencing something strange, you may want to look in that area.

The func_mortar_field is where the mortars actually drop from. It must be triggered to drop the bombs, which is where the func_button comes in.

The func_mortarfield is quite simple to setup. First, set its Name (targetname) to mortar. This is what the func_button will target. The Spread Radius (m_flSpread) determines the mortar strike's accuracy. The value is the number of units of variance from a direct hit. The Repeat Count (m_iCount) value is equal to the number of bombs that will be dropped. One is pretty devastating, so more is better!

Finally, you need to setup a trigger to activate the func_mortar_field. In this example, we're using a func_button, but anything capable of triggering an event can be used. Simply set the Targeted Object (target) of the button to mortar. Setup any other properties/flags as you normally would. Now, when the button is pushed, the air strike is triggered and bombs are dropped at the position indicated on the table.

A lot of this information will be more easily understood if you can examine the example map as you're going through it.