VERC: The History of Half Life: 1996 to 1998 History
See all pages See all uploads See all categories

The year of 1998 was almost at a close; the summer had passed; the autumn ending and the Northern Hemisphere preparing for the cold of winter. It was a normal November for many people. All those people, however, had little or no interest in the video games' industry, as for those who did, November 1998 marked the coming of a new age in computer gaming. An orange box appeared on retailers' shelves, featuring a geeky looking guy with glasses and facial hair wearing a bulky black and orange mechanical suit and brandishing a shotgun. Next to his head was a logo: scientists and greek mythologists would recognize it as Lambda. To everyone else, the logo was to become the most recognized and admired symbol in PC Gaming; the logo for the game that changed the First Person Shooter forever. The game was Half-Life. 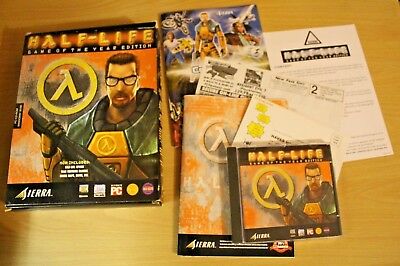 The box we plucked off the shelves with eager anticipation (Note this is the Game of the Year Edition)
Since its release, Half-Life has taken the gaming world by storm. It has won over 50 Game of the Year awards, was hailed as Game of the Millennium and was even awarded the title of the Best PC Game Ever. But where did it come from? Who was responsible for this work of genius? The answer- a Washington based company described as an "unlikely new entry", founded in 1996 and presenting Half-Life as their debut title. Valve Software had made its mark on the games industry in one release.

The men responsible for this were Gabe Newell and Mike Harrington. The former was Managing Director of the company, coming from a background in Microsoft and the man responsible for the program management in the first two incarnations of Windows. The latter, though now departed from Valve, was the director of development and also hailed from Microsoft, being a developer and Lead developer on OS/2 and Windows NT. Despite being armed with a team who had contributed to the likes of Civilization, Final Doom, Duke Nukem 3D, Shadow Warrior and near enough everything you get in a Microsoft Office Package, Valve had trouble finding a publisher. After being laughed out of a few meetings, they met up with industry legend Ken Williams, the founder of Sierra On-Line. Thanks to what was described as "The Right E-mail at the Right Time", Sierra On-line (who became Sierra Studios shortly after) signed Valve up for a one-game deal, code-named "Quiver". 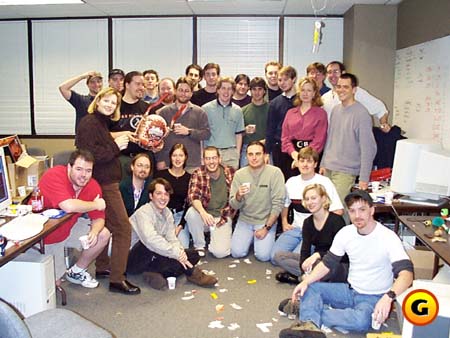 The Valve Team
Valve originally set out to do a Class B game, as no software developer should attempt a blockbuster title as a first release. The story for "Quiver" was taken from a novella by Stephen King entitled "The Mist", though it was heavily modified and developed to make the location a High Tech Research Lab and not a Grocery Store (seriously). Quiver eventually morphed into Half-Life and the story we know today (despite its criticisms as a B Movie plot, the story was fleshed out by award winning novelist Marc Laidlaw).

Half-Life boasted advanced AI, skeletal animation, talking characters (something we take for granted nowadays) and a clever story, but Valve did not want this to be the be all and end all of the game experience. They wanted to engage the player in the game like never before. Warren Spector (the man behind Deus Ex) said: "The most impressive thing Valve has done is make you feel like you're in a real place. This isn't some goofy game space, but a believable research center." Despite this great challenge they had set themselves, Valve did not have a model to work with. They pretty much made it up as they went along.

Valve announced Half-Life to the public in April 1997. There was much interest and speculation from the gaming world. Perhaps the feature that really grabbed attention was the fact that Half-Life was using the Quake Engine. What made them even more attentive was Valve's claims of highly modified code, the animation system, AI and 16-Bit colour graphics. Everything that had attracted Sierra to sign up Valve was now being presented to the public, alongside some screenshots that Gabe Newell later described as "Terrible." The release date was Christmas 1997. 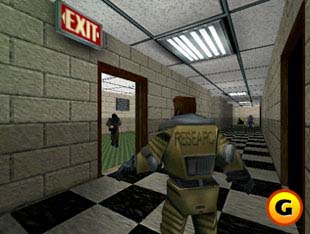 The first screenshot that Valve released 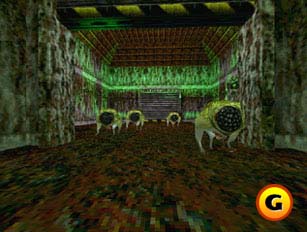 The second screenshot that Valve released
That release date never came. All of a sudden, to the dismay of many, it got pushed back to 1998. The reason: Half Life was becoming too complex for its original product definition. The features they wanted to implement were taking longer than they initially thought. Gabe Newell said in an interview that "We reached a point where we had to make a choice between sticking to our original product definition and slipping our schedule or cutting a bunch of features in order to make Christmas." They chose the former option, scrapped most of their work and began to redesign Half-Life into a Class A game.

So, Half-Life missed Christmas and was scheduled for an April release. Then Sierra announced a Summer release date. Half-Life stole the show at Sierra's booth for the second year running at E3, the green tentacle beast sequence winning the admiration of the crowds. However, Sierra held a showcase of their 1998 line-up in Seattle in August and Half-Life was noticeably absent. This fueled speculation that Half-Life would not see the light of day until 1999, but Sierra assured the worried Gaming World that Valve was simply holding back Half-Life from the show in order to do some tweaking. September was set as a new release date... October at the latest. Then came the announcement that Half-Life's release date, confirmed eagerly by Sierra, was the Thanksgiving weekend of November.

Meanwhile, the previews were coming thick and fast. Many of them were alluding to the "lowly research associate" you play as and the "secret underground research base" you play in. 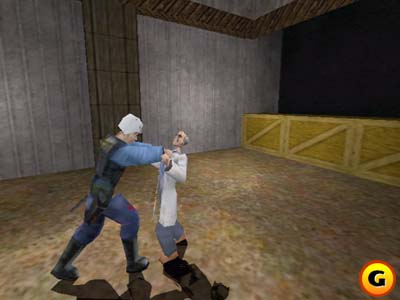 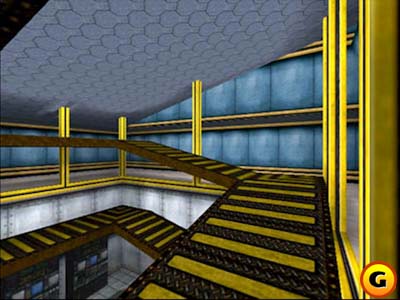 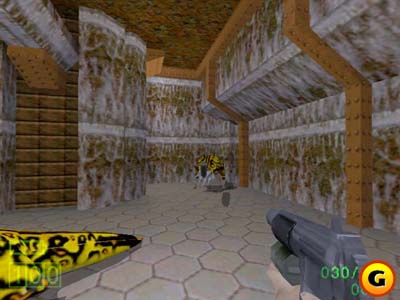 Early pre-release screenshot 3
Valve had entered "Crunch Mode" after the 1998 E3 Show, i.e. everyone was working extremely hard to get Half-Life finished. Some of the planned features did not make the final code: "Pain Skins", which showed characters reacting according to where you shot them, were scrapped, as was a sequence where you piloted a helicopter. A "Heavy Weapons Grunt" was also cut from the game. As well as finishing the final game, Valve were working on the finest marketing move ever made: an OEM version of the game which shipped with Graphics Cards. Valve's crowning glory was revealed with "Half-Life: Day One". The gaming world's response: "Wow." 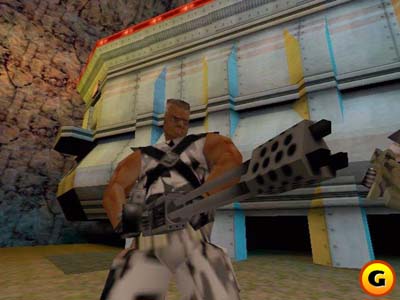 The Heavy Weapons Grunt that was scrapped from the game
Half-Life: Day One was a near final version of the first 20% of the game and became the most talked about thing on the planet. As seems to be standard nowadays, the OEM version leaked onto the internet and was downloaded illegally. It was hailed as one of the best 3D action games. Ever.

As the world went crazy over Valve's OEM release, the Seattle Offices were putting the finishing touches to Half-Life. "Personal Hygiene is at an all-time low," quipped one of Half-Life's game designer's John Guthrie. The members of the team who had done their jobs were playing the game constantly to make sure everything was just right, while Mike Harrington read through line after line of code to crush the last known bugs. Many of the Valve Team were now sitting around wondering what to do with themselves: for the last two years they had ploughed away at making Half-Life, but now it was done and they found themselves with a lot of time on their hands that they didn't quite know how to fill.

With the last known issues fixed, a CD was burned and sent away for testing while the team went back to their lives. Four days-of-waiting later, an e-mail was received: the CD was approved. Half-Life was finished, the code was declared Gold (developer speak for finished), it was replicated, boxed and hit the shelves on the 19th November 1998. The Gaming World, to put it lightly, went nuts.

Any gaming publication or website worth its salt got their sweaty hands on Half-Life and got their review out. Impressive does not come close to what was said: Half-Life was suddenly the greatest game of all time; revolutionizing the genre and involving the player like never before. Sales rocketed (today it is the second highest selling PC Game after Maxis' The Sims), Gordon Freeman became a household name and Valve Software became one of the most respected game developers in the industry.

But their greatest achievement? Looking at the Half-Life world today, we may say that it was putting Worldcraft 2.0 on the discs, as this paved the way for the growth of one of the largest internet communities in existence. In Part 2 of the History of Half-Life, we'll look at the awards that followed its release, the contributions of Gearbox software and the growth of the Half-Life internet and mod community.

A lot of the information and pictures on the development process have been taken from Gamespot.com's Feature "The Final Hours of Half-Life." I recommend you read it for a more in-depth look at Valve's labors. Other sources include The Official Half-Life website, The Sierra Website, The Valve Website and the many articles from Gamers.com
This article was originally published on the Valve Editing Resource Collective (VERC).
TWHL only archives articles from defunct websites. For more information on TWHL's archiving efforts, please visit the TWHL Archiving Project page.