When creating a counter-strike map there are several things you need to consider in order to achieve good gameplay.

I'd like to start the tutorial by introducing you to some good ways to layout your cs_ and de_ maps.

First, lets take a look at some successful maps. 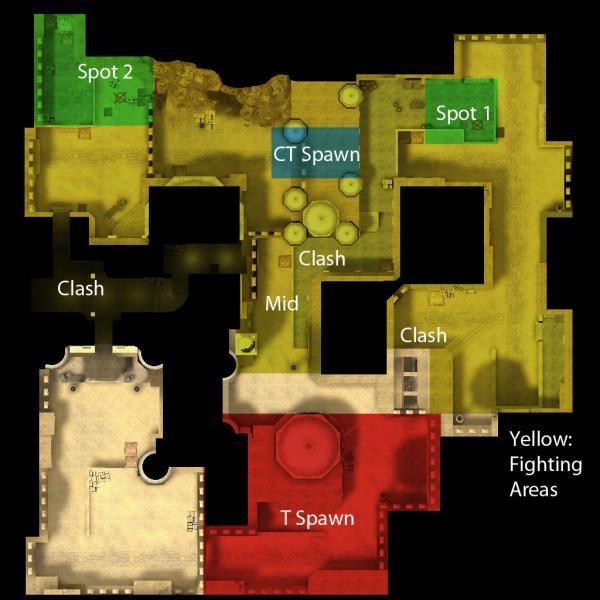 de_dust 2
In de_dust2 there are two bomb spots on both sides of the CT spawn, allowing them to choose in which direction to go. It is the same for the T's however it takes them longer to reach the objective, allowing the CT's to set up their defenses / camping locations.
The map has three Clash points, a clash point is an area where both teams are most likely to run into each other, these are areas where most firefights will take place.

There is also a Mid point in the map which can be used to switch between bomb spots or provide support from different angles.

de_dust2 is such a successful map because it allows for fast paced gameplay throughout. The terrorists always have three routes to choose from, and they can always switch around thanks to the mid point. The Clash areas are well balanced, both teams have an equal amount of space and cover.

There are other successful maps that use the exact same theory as de_dust2, like Piranesi. 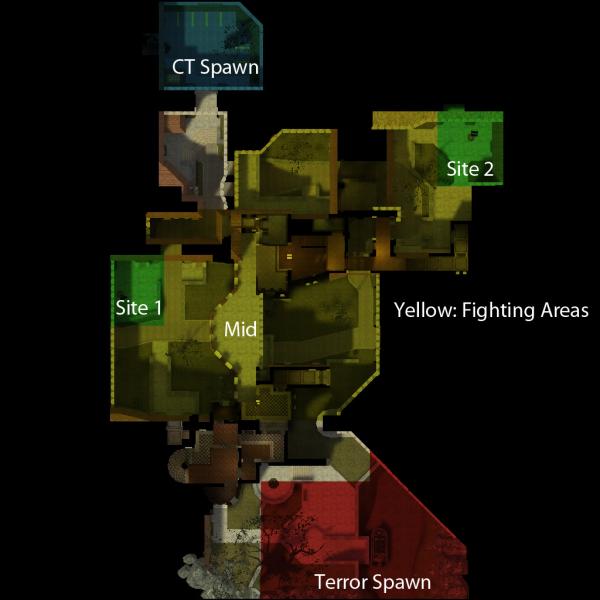 de_piranesi
The layout is slightly more complex, but the theory remains the same. There are two sites that the CT's reach first, the T's have three main routes to choose from, and they are able to mix things up thanks to the mid point of the map. Piranesi is also great because both teams have the ability to provide support for the bomb spot from atop or inside the castle. 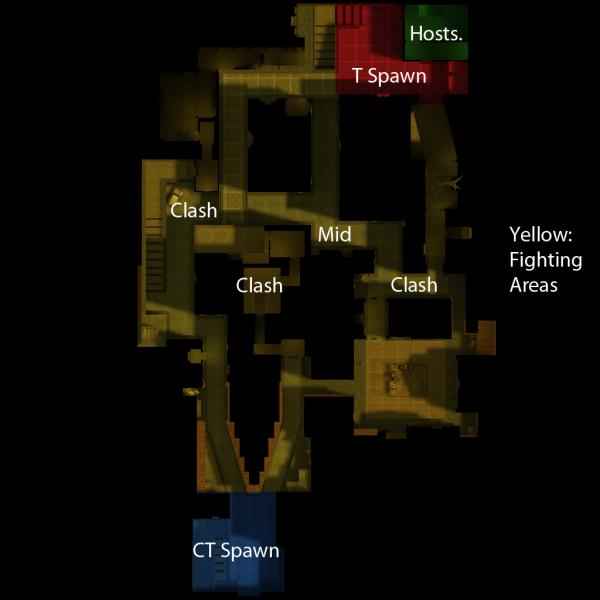 cs_italy
Again as you can see, the theory is nearly the same. There are three big clash points where the teams usually meet, just like in de_dust2. You are also able to quickly switch sides thanks to the mid point in the map.

It is quite big in size, It can prove to be a nuisance sometimes if playing with less than 12 players, but that's what it's designed for, for big 24-32 player servers.

cs_italy and cs_office are both good examples of successful hostage rescue maps.

As you can see from above, almost all successful maps have a similar layout where there are three passages to choose from and a mid point you can use to switch between passages. This is the sole reason why these few maps are so successful compared to others, this method is very good for strategic and fast paced gameplay.

When creating a map, it would be best to first create a layout / overview clearly showing all the paths, objectives and clash points. Making sure early on that your map is laid out properly is important.

What should I do while creating my map?

Just because your map is layed out nicely wont always mean that gameplay will be good. There can still be some unbalanced areas where one team has an advantage over another, There can be overpowered sniper spots, or areas too close together making long range weapons nearly useless.
To solve these problems you will have to play test your map before you release it. Play testing your map will help you solve small issues you may have not expected or seen while creating your map.

Arena maps like fy_, 35hp_, aim_, gg_, awp_ are a completely different deal. Usually very small maps, having no strategic gameplay what so ever. Still, there are some things you can keep in mind to make the maps just a bit better:

DiscoStu
Commented 10 years ago2011-12-29 07:07:23 UTC Comment #101043
I agree with Daubster. I.e Italy works for the analysis, but doesn't work well in my opinion. It's big and slow. Other than that, the important points of mapping are all covered and it's a good analysis.

zeeba-G
Commented 10 years ago2011-12-30 16:24:58 UTC Comment #101047
Thanks for the good pointers. This is the kind of thinking that goes into good maps. With halflife I think a lot about movement i.e gauss and longjump etc. Counterstrike has its own unique features to think about.

Stojke
Commented 10 years ago2011-12-30 17:00:40 UTC Comment #101048
I would like to add that you must not have many ways and directions, as often players have no idea where are they going. Both teams should have an equal balanced amount of directions at which they can go.
Too many may cause unbalanced gameplay and confusion among players.
Also, some of the very best maps have places out side and inside buildings, like de_nuke that has a below level, big yard and a building.
Combining these things can result into a great map that is fun to play and has quick game paste.

RabidMonkey
Commented 10 years ago2012-01-06 10:09:36 UTC Comment #101049
Some good points about specifics for CS gameplay (clash zones, objective runups etc) - Stojke makes a good point about limiting your routes and I think you could have touched more on general layout theory and how it ties into CS, (i.e. how the popular maps are generally built around a simple series of loops, or a figure-8 layout) perhaps even dissected a round of a popular map like Dust in detail to truly examine how the gameplay works in an actual round. Overall you have some good tips, but general layout theory is equally as important as taking into account the CS specifics!