One of the interesting effects from Half-Life that people want to use is that of barney opening a door by using a retinal scanner. The effect is broken down into a number of smaller parts -

The Door and Scanner

First things first, lets setup the basic components. Make the door. It can be simple or complex. Whatever. That's up to you. Give it a Name (targetname) - the example map uses door1 . Also, set its Delay before close (wait) to -1 so it stays open.

For the scanner, insert one of the prefab retinal scanners which are located in the Usable Objects prefab library (included with the editor). The bottom of the scanner should be 28 units above the ground so that its at the right height to interact with barney's scripted_sequence animation. Once you've got it in your map, select it and press Alt+Enter to bring up its entity properties (it's a func_button). Set its Name (targetname) to something (for this example, I've used scanner1).

We'll also create the sounds that the scanner will appear to make. Create two ambient_generic entities. Place one over the scanner and one over the door. Select the one over the scanner and press Alt+Enter to bring up its properties. Give it a Name (targetname) of blip1. Set the Path/filename.wav of WAV (message) to buttons/blip1.wav. In the flags properties, set the Medium Radius, Starts Silent, and Is NOT Looped flags. Setup the ambient_generic over the door exactly the same but name it kachunk1 and set its Path/filename.wav of WAV (message) to buttons/button4.wav.

While were at it, place a barney (monster_barney) beside the scanner. In his flag properties, enable the Pre-Disaster flag to stop his annoying chatter.

You should now have something similar to what is pictured below. 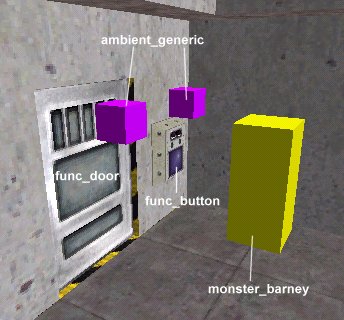 We'll also throw in a scripted_sentence so barney says something appropriate. The location of the scripted_sentence isn't really important. Set its Name (targetname) to something - this example uses hevyes. Set the Sentence Name (sentence) to !BA_HEVYES. The ! causes the sentence to be streamed in rather than stored in memory. The BA_HEVYES calls the sentence "Go right on through sir, looks like you're in the barrel today." Set the Speaker Type (entity) to monster_barney. Set the Listener Type (listener) to player. This will make barney focus on the player as he speaks. 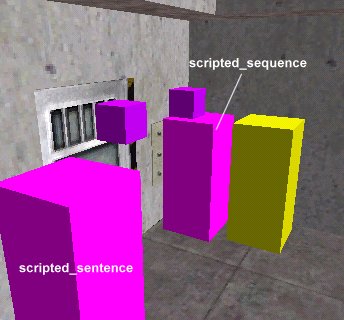 Ok, now we need to coordinate everything we've just created. This can be accomplished quite simply with a trigger_once and a multi_manager. First, place the trigger_once brush entity just before the barney (see the picture below for reference). Set the Target (target) of the trigger_once to opendoor1 (this will be the name of the multi_manager which we're also about to define.) The whole sequence of events will be triggered when the player walks into this trigger_multiple.

Place a multi_manager somewhere in the general vicinity, and give it a Name (targetname) of opendoor1. Turn off SmartEdit mode and add the following key/value pairs - 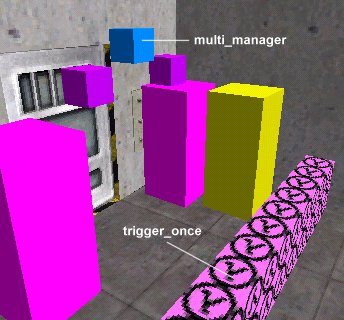 That's all there is to it. It's not all that complicated.