VERC: How To Make A Pop Machine History
See all pages See all uploads See all categories

This tutorial will demonstrate how to make a pop machine with usable buttons. Pressing these buttons will drop a can of pop into the open slot. If it eats your change, you're also allowed to smack this machine with a crowbar in which case the front will shatter and out will pour all the cans of pop. Woo! Free pop! Ok, on with the tutorial.

Ok, the most difficult thing about making the pop machine is the actual brush construction. It's a pain in the ass. Fortunately, I provided a brush model of the machine in the example map so you don't have to make it yourself. 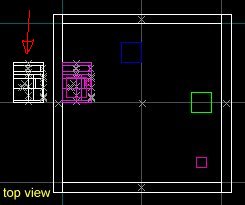 Snag the map and cut'n'paste the brush model (pointed out in the above pic) into your own map. You might want to enable texture lock before you move it anywhere (by pressing Shift+L - note that as of Worldcraft 2.1, texture lock didn't hold textures on a rotated object). There, that was easy. The hard part is over. 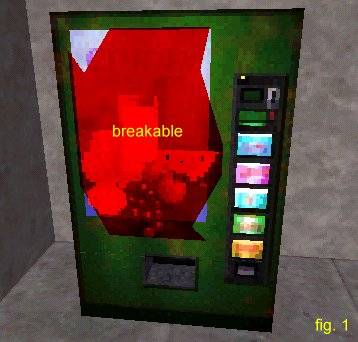 Select the front panel (as shown in fig. 1, above) and press Ctrl+T to make it an entity. Select func_breakable out of the list that appears. Set its Target on break (target) value to pop_break (for this example). Make sure the Material type (material) value is set to Glass (1). Press the Hide button now and then close the entity properties dialog.

Note: pressing the Hide button will cause the selected object (in this case, the func_breakable) to be turned into a VisGroup object. If you are not familiar with VisGroups, refer to Grouping and VisGrouping in the User's Guide section of the editor help file.

Now, select the top button (as shown in fig. 2, above) and press Ctrl+T to make it an entity. Select 3 out of the list that appears. Set its Targeted object (target) value to pop_drop (for this example). Set the Lip (lip) value to 2. Set the Sounds (sounds) value to Quick Combolock (4). Set the Delay before reset (wait) value to Stays Pressed (-1). Last but definitely not least, set the angle value to the direction the button should move in when pressed. In this example, the angle value should be 180.

Note: You will have to set the angle of each individual func_button entity because pasted entity properties do not carry over angle or flag values. 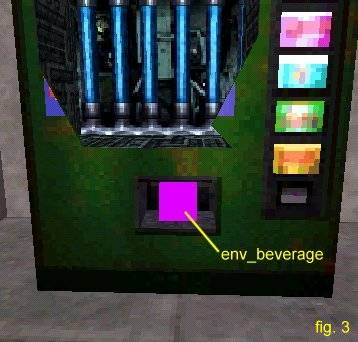 Now, place an env_beverage entity into the little slot as shown in fig. 3, above. In it's entity properties, set the Name (targetname) to pop_drop. Each time one of the buttons is used, a can of pop will appear here. Set the Capacity (health) to 5. Only one can of pop for each flavor? No wonder the scientists beat up these machines! Set its Beverage Type (skin) to Random (6). Last, set the angle value of the env_beverage to point in the direction you want the end of the can to face. In this example I've used an angle of 90. 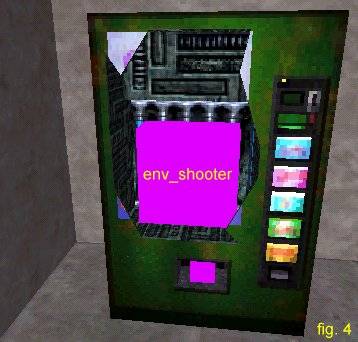 Last thing to setup - the env_shooter. This will cause a river of cans to flow out of the machine when the front panel is broken. Place it behind the panel opening as shown in fig. 4, above. Set its Name (targetname) to pop_break. Set the Number of gibs (m_iGibs) to 30. Delay between shots (delay) should be left at 0. Gib velocity (m_flVelocity) can be left at 200. Course variance (m_flVariance) can be left at 0.15. The higher this number, the more spread out the cans will be. Gib life (m_flGibLife) should be left at 4. Set the Model (shootmodel) to models/can.mdl. Set the Material sound (shootsounds) to Metal (2). The angle of the env_shooter entity should point in the direction you want it to shoot. For this example, an angle of 0 is fine.

Now, the last thing to do is select the base machine (the part that isn't the breakable front panel or the pushable front buttons) and press Ctrl+T. Turn it into a func_wall. This is necessary to make the machine look proper once it has been "lighted". Since light bounces aren't applied to non-world objects (ie: brush entities), there would have been a difference in the lighting on the func_breakable area.