One of the most common changes people want for their mod is to add new weapons to it or make changes to existing weapons. This article attempts to be a high-level overview of the weapons system in the Half-Life SDK. This guide assumes that you have experience programming in C++ and a programming environment. Also, your custom mod should already be set up.

This article specifically provides you with a guided tour around the Half-Life code base, with a focus on showing all the different areas that you will need to consider when modifying existing weapons or adding new ones.

We'll start by looking at one weapon, to see what the class hierarchy looks like: That's quite a few classes! Implementing your weapon will mostly involve overriding methods in several of these classes. Listing all the methods in each of these classes will take a long time (there's a lot), so we'll focus on those overridden by the weapons in the HL SDK only.
Note: in the tables below, the Implemented by sections list weapons that implement custom versions of the methods. If the method isn't implemented, the default implementation is used instead. CBasePlayerWeapon has some default implementations of methods in its parent class, and so on.

This is the base class for all entities. There are a lot of virtual methods on this class, but only a few need to be considered when working with weapons.

This is the base class for "items" that the player has in their inventory that can be selected using the HUD and used by the player. However, in the final release of Half-Life, this only applies to weapons. Because of this, only CBasePlayerWeapon directly derives from this class. This class does, however, contain a lot of functionality relevant to weapons.

This is the base class that all weapons inherit. Your custom weapon will almost certainly inherit directly from this class as well.

Aside from the main classes for weapons, weapons are referenced in several other areas of the code, as well as game resources. To fully set up a custom weapon, all of these must be considered in your changes.

If you open weapons.h, you'll find this block of code defining an ID for each weapon: When adding a new weapon, simply add a new ID to this list of constants, incrementing the value. For example, the next new weapon would have an ID of 16. These constants are used in your weapon's code, in the Spawn method to set m_iId, and in the GetItemInfo method to set the p->iId value. Refer to an existing weapon's implementation to see these in use - for example, the glock:

Most of the "real work" with a weapon is done on the server - bullets are fired, ammo counts are changed, and damage is done. However, the client-side also needs to do some work in order for a weapon to function correctly - typically, this is playing the "shoot" sound, applying bullet decals, ejecting empty shells, and similar audio-visual effects that the server doesn't particularly need to care about. Here's a quick rundown of what client code needs to be changed when programming with weapons.

If you search the rest of the code base for the ID constants (for example, WEAPON_GLOCK), you'll find only one other reference. It's in hl_weapons.cpp, in a method named HUD_WeaponsPostThink: This method is only run when client prediction is enabled (which it is, by default). You should add a new case for your weapon, just follow the same standard. Note that you'll also need to declare the equivalent of g_Glock for your weapon, as well as the HUD_PrepEntity call. All this code is in the hl_weapons.cpp file in the client project.

If you look at the code for existing weapons, you'll find lines that look like these: You might like to investigate the events/python.sc file to see what's inside it. Don't bother! It's meaningless. The contents of the file is unimportant - and in the case of the stock HL weapons, they're all identical. Only the name of the file has any meaning. The contents of the file were probably intended to be some sort of scripting system for the engine, but it was never implemented. So just create an empty .sc file, or copy one of the existing ones, and give it a good name.

If you search for python.sc in the code, you'll only find it in two places. The first is in the weapon code, in the PRECACHE_EVENT call. The other is in hl_events.cpp, in a method called Game_HookEvents. If you look at the comments for Game_HookEvents, you can see a helpful explanation from a Valve programmer about why the contents of the .sc file aren't used.

Anyway, simply declare your event method in the extern "C" block at the top of this file, and then a gEngfuncs.pfnHookEvent call for your weapon/event inside Game_HookEvents. Next, grab one of those event function names, such as EV_FirePython, and do another search to see what you find.

Aside from the hl_events.cpp file you've just changed, the only other place these functions are found is the ev_hldm.cpp file. There's another extern "C" block to put the function definition in and then the function implementations later on in the file. Your best bet is to copy an existing method and tweak it to suit your weapon.

Back in weapons.h, you'll find another block of defines: These constants are only typically used in the weapon's implementation, so they're somewhat optional and could instead be hard-coded into each weapon. It's convenient to keep them all in the same place, though, so it's best to add a new weight for your weapon as well.

Essentially, the weight defines if a weapon that has been picked up is "better" than the weapon that is currently equipped. If the weight is higher, the new weapon will be automatically equipped. Otherwise, it will be added to the player's inventory and they will have to switch to it themselves. The weight value is assigned to p->iWeight in the GetItemInfo method.

In weapons.cpp, you'll find a function called W_Precache. This method will, as you might expect, precache the weapons when a level is loaded. Simply add lines for each new weapon (and ammo box) entity you add to your mod. For example, for the glock: Note that the value given to both UTIL_PrecacheOtherWeapon and UTIL_PrecacheOther is a class name. This is the class name as defined in the LINK_ENTITY_TO_CLASS line in your weapon code. If your weapon has multiple class names (e.g. the glock is both weapon_glock and weapon_9mmhandgun) it does not have to be precached twice. All these methods do is create an entity of that classname, call the Precache() method on it, and remove the entity.

It's easiest to use the existing ammo types for your new weapons, but usually, you'll probably want to add new types. This requires making a sequence of changes across multiple files. This will be covered in depth in the Custom Ammo Types article, but a quick summary would be:

If you want to add a new ammo box, it's actually very simple. Just copy and paste an existing ammo box, change properties like the model, the pickup sound, ammo types or numbers, and link it to a new class name. For full details, see the Zoomable Weapons article, which has a section on adding custom ammo types.

Skill settings let your weapon do more (or less) damage based on the selected difficulty. If your weapon uses standard bullets, then your skill values should come from the ammo's skill values. But other weapons have their own custom skill values.

Skill cvars are defined game.cpp: And they are registered in game.cpp, in the GameDLLInit method: A variable for the value is present in the skilldata_t struct, in skill.h: Which is set in gamerules.cpp, in the RefreshSkillData method: The GetSkillCvar method will select the value for 1, 2, or 3, based on whether the user has selected easy, medium, or hard (in that order) when they started the game.

These cvars have a default value of 0, so that needs to be changed. When the game starts, the skill.cfg file is loaded and the cvar values are read from them. The actual values for the skill cvars should be added to this file. For multiplayer games, the value is hard-coded so every player does the same amount of damage with every weapon. This is set in multiplay_gamerules.cpp, again in the RefreshSkillData method: Finally, this value is referenced in the weapons code when dealing damage. For example, for the shotgun, the FireBulletsPlayer function is called, which has the following code:

Something that isn't always immediately obvious is that you want your weapon to be added when you run the impulse101 command in the console. Adding this is fairly straightforward if you know where to look - in player.cpp, find the CheatImpulseCommands function. towards the top of that function, you'll see a bunch of GiveNamedItem calls under the case 101: statement. Simply add another GiveNamedItem call with your weapon's classname, and you're good to go.

Another option that might be forgotten about is allowing the weapon (and your new ammo, if applicable) to be placed inside a func_breakable entity. You can find the relevant code in func_break.cpp, near the top of the file. Add your desired classnames to the CBreakable::pSpawnObjects array, and you're done. Be sure to make the relevant changes to the FGD as well!

This should be obvious, but when you're adding a new model, you'll need new models and sounds. Weapons generally have two models: Aside from the actual modelling work, there are a few interesting features of the model's QC file that are especially relevant to weapons. If you look at a decompiled weapon's QC file, you might see some sequences defined like so: The thing to note here is the event syntax. It looks like this: The engine will process the event when the indicated frame number is rendered by the engine. The options are passed as a string to the client to be handled. Events 5001 and 5004 are the main ones for most weapons, but you can see all of them defined in entity.cpp, in the HUD_StudioEvent function: Essentially, events 5001, 5011, 5021, and 5031 will show a muzzle flash at weapon attachments 0, 1, 2, and 3 respectively. For the most part, you'll only ever have 1 attachment on a weapon, but some NPC models have more. Event 5002 is the same for a spark effect, but only for attachment 0. Event 5004 plays a sound - but only on the client-side, other players won't hear it. This is why the "shoot" sound isn't a model event - other players need to be able to hear it.

Weapon sounds are fairly straightforward - you should have sounds for shooting, reloading, and so on. There's nothing special about them aside from the standard audio encoding settings that the engine needs.

Setting up HUD sprites is a bit of a pain because they're defined in "sprite sheets" inside the hud sprites. Each weapon has a text file inside the sprites folder which matches the weapon's entity name, as defined in pszName in the weapon's GetItemInfo function.

The text file has a relatively simple format. The first line is the number of lines in the file, not counting the first line. Subsequent lines are formatted like so: A more detailed description of each field: For example, let's look at sprites/weapon_9mmhandgun.txt: If you were to look inside these files, you would find the relevant icons for the pistol: 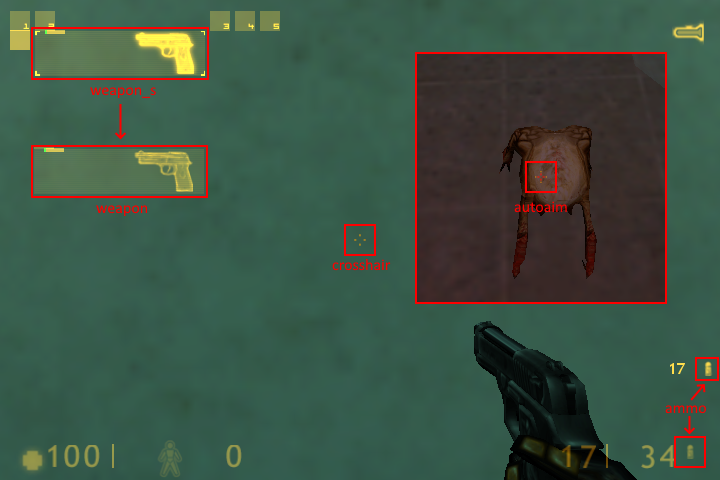 The last thing to worry about when adding any new entities to the game is to modify the FGD so you can use it in your level editor. For weapons and ammo boxes, this is pretty simple - just copy an existing one and change the names. Weapons and ammo don't typically have any special keyvalues, so they'll be one-liners.