The "Rustmill" effect refers to the effect created in the Rustmill map. In it, there was a "map board" that consisted of an overhead view of the level. It was divided into sectors that would light up when someone was in that sector. By shooting a sector on the map board, you would be teleported to that sector of the map.

This effect is divided into two different systems - the teleport system and the signal system. 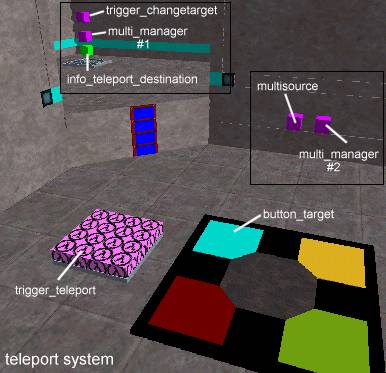 The teleport system is pretty simple.

In the example pictured above (taken from the tutorial example map), the player must be standing on the teleporter pad that sits in front of the map board, otherwise, he will not teleport anywhere.

The teleport system makes use of the following entities: 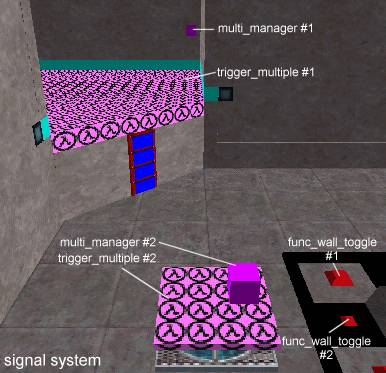 The signal system is also extremely simple. Each destination that you want to teleport to will reqiure its own trigger_changetarget, multi_manager (#1), and info_teleport_destination.

Each area that triggers a sensor will be covered by a trigger_multiple entity. Every second (its Delay before reset (wait) is set to 1) it triggers a multi_manager. The multi_manager immediately triggers the sensor (a func_wall_toggle) turning it on, then triggers it again 0.5 seconds later to turn it off. (Each sensor's func_wall_toggle has its first spawnflag checked so it "Starts Invisible".

If you need a visual example of the above or just want to see it in effect quickly, download the example map provided below. It's a simple map allows the player to teleport to four different areas of the map. Below are a few notes.