Commented 2 weeks ago2022-01-09 12:54:28 UTC in vault item: Concrete_Jungle Comment #103995
Pretty basic, which can be easily forgiven since it's one of your very first maps. One thing I would say is that you should make sure you place info_nodes entities for AI pathing. Without info_nodes, enemies will tend to stop in place when they can no longer see the player. This means that the zombies in the first room will never follow you into the second. Likewise the assassins in the second room are severely handicapped since the player can hide behind cover and then peak and shoot to kill them far too easily. Another thing to note is that it doesn't really have any sense of place, it's literally two giant concrete rooms. Again, forgivable given the lack of experience. The next step is to make a map with interactive elements such as buttons, doors and triggers and so on. Once you've got the basics down, work on detailing to make believable environments.

UrbaNebula
Commented 2 months ago2021-11-23 21:37:04 UTC in journal: Modding Endevors Comment #103845
I'm always happy to hear about new Half-Life 1 mods, especially a total conversion away from the Half-Life universe. That's likely something I wanted to look into after I'm done with The Core. Who knows what will happen now, but I will always be on the lookout for quality HL1 singleplayer mod content.

UrbaNebula
Commented 2 months ago2021-11-06 14:56:10 UTC in journal: Why i'm not making mods Comment #103815
I'm in the opposite camp. I have a ton of mod ideas that I don't have time to work on. I wouldn't know where to begin in terms of making my own game, but maybe that'll be something I can look into once my contract at 3DR is up and The Core is released.

Best of luck with your project.

Thanks for the well wishes everyone. Most amusing as always.

I made a recent video update regarding the Core and the main point was "People change." I don't think I'm going to be done with gaming for quite some time yet, but I have started to appreciate more classic titles recently. Modern RPGs are potentially getting very exciting, but FPS games I will much sooner fire up Doom or Duke 3D before any recent releases. Makes sense that when I actually started working with an actual development company it was one focusing on the retro games market.

Commented 5 months ago2021-08-27 16:07:21 UTC in vault item: Janitor Simulator Comment #103680
Fun little idea, but I definitely agree with what Windawz said. It's basically a series of triggers and zero input from the player. You could do a lot with this idea using different tricks to show the bins being emptied or the pools of water being mopped up. Sound effects, actually requiring the player to "use" the things they're supposed to be working on and some rendering tricks.

The actual design of the small play area is a little bland looking as well.

Oh yeah, good map or something.
This comment was made on an article that has been deleted.

As a deathmatch map, this could do with some fine tuning. There are a lot of small detail such as signs that the player will get stuck on. These need to be set to func_illusionary or be clipped to prevent snagging. There are also far too many masked textures such as fences and barriers that block bullets when they shouldn't. I from a visuals side of things also noticed some nulled surfaces (top of the shelves in the slime hallway) and a lot of stretching and squashing of textures elsewhere (signs and crates)

So... that nuclear sign in The Core Decay's logo... getting 3DRealms' attention was the plan all along, right? ^_^

Now that you're in 3DR do you think you can chase up the Duke Nukem Forever 2001 build for us?

That's out of 3DR's hands at this point. I believe you need to take that up with Randy Pitchford.

UrbaNebula
Commented 11 months ago2021-01-30 22:43:52 UTC in journal: :( Comment #103214
I love TWHL. It's fair to say that I've spent a considerable portion of my life here. A lot of the activity is over on the Discord now, but there are definitely fewer old timers around nowadays.

UrbaNebula
Commented 1 year ago2021-01-05 17:25:48 UTC in poll: Tis the Season Comment #103182
Winter means little to no work needed in the garden. I also prefer summer outfits, boots and thick coats all the way. Arriving home is always more pleasant in the Winter, when it's dark, cold and wet outside.

TWHL Tower 2 takes everything that the first mod laid out and dials it up to eleven. More floors, more action, more puzzles, more insane Spirit entity wizardry. The whole experience is absolutely worthy of a playthrough, but I will attempt to break down each floor individually for those who care.

Full floor breakdown over at Run Think Shoot Live. (I smashed through TWHL's character limit and couldn't trim any more...)

Overall, this was an absolute blast to play through and a joy to have been an active part of. Stunning work by everyone involved and a huge and hearty thank you to Strider for taking on the project, as well as Penguinboy and Unq for picking things up when Strider had to step away for a while to go and dodge security cameras and disable some lasers somewhere.

Pretty fun to run around as well, but then I absolutely love checking out people's first maps, when it's fresh and exciting. Regardless of skill, the passion is always wonderful to behold. You just happen to be pretty skilled as well. Haha. Well done.

UrbaNebula
Commented 1 year ago2020-08-29 19:27:07 UTC in journal: So, first post here: a rant because I can't access Half-Life 2 because of a person that was once my friend Comment #102874
Dude, I'm going to try and say this as kindly as possible, but that's not a friendship. That's a hostage situation.

I get that you like the guy and at times he can be kind and caring, but for him to go off on you for taking a few moments to yourself... That's borderline psychotic. And the fact that he has caused LASTING phobias as well?

Relationships and friendships break apart all the time and both sides get over it. Hell, once school is over you will likely lose touch anyway, if not immediately then certainly over the coming years when you're both off doing different things. Telling him that you don't want to hang out any more might cause him some grief in the short term, but drawing this "friendship" out doesn't exactly seem like it's going to do YOU any favours.

UrbaNebula
Commented 1 year ago2020-07-22 19:58:20 UTC in journal: My mod Comment #102802
Rather than posting a journal, you could put this in the Maps and Mods forum, so you can update the thread as you progress with development.

As it stands, it's a little bit generic in terms of the name; "Scientist" is a little bit basic, like calling Blue-Shift "Guard" or Opposing Force "Soldier." Haha.

Also, I'm curious as to why you would call it "Black Mesa Research Center" if it's supposed to be a different place? Everyone who plays it will likely just assume it's the same Black Mesa facility we see in most other mods with an incorrect name... Why not come up with something else?

UrbaNebula
Commented 1 year ago2020-07-18 21:49:41 UTC in journal: Tragedy Comment #102792
Oh man, I'm so sorry to hear that. I even remember the posts from back when you first got him. Much love to you both and remember that in some form or other you will see him again.

Hopefully this will bring on some joyful memories of when he was little and also very big at the same time. 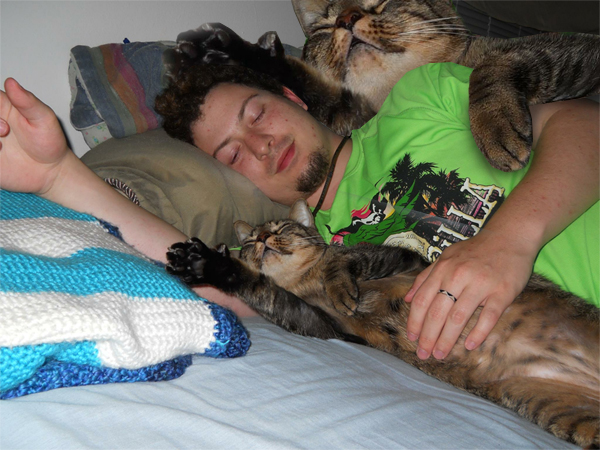 This is a really solid little gruntfest map pack, it has to be said. I loved how it started out with the player largely having the upper hand, with the first handful of grunts being caught unawares. This is the best way to handle gruntfest maps while your loadout is a little light. Too often you see the player taking on large squads with only a crowbar and pistol. As the maps progress you start to take on larger and larger squads in more open areas, with smaller groups appearing in claustrophobic hallways towards the end. I played on hard and for the most part I was sitting around 25 HP and 20 armour. This meant that later engagements had to be approached carefully and executed flawlessly in order to survive. Finally, the map doesn't appear to end. I found barney but from that point was given no sign as to whether I needed to backtrack or the map simply ended there? In the end, I just closed the game. If there is a genuine end point to the map, it needs to be signposted better.

The architecture throughout is basic, but in a classic sense that fits the Half-Life theme really well. There are only a few parts where the brushwork is a little obscure, making it hard to discern what a particular object is supposed to be. There are a few instances of what I assume a prefabs that have been flipped and don't behave correctly. Texturing as again fairly basic which fits the bill nicely given the simplicity of a lot of the environments. It also has a few of the same pitfalls, with one object in particular that looked like a glass block in the back of a truck which was supposedly made of meat??? No idea what that was meant to be.

Ambience is good throughout with plenty of ambient noise in the background and no area comes to mind that was completely silent. One odd moment concerns a mortally wounded guard near the prison sells who simply and calmly says he had a long night and is going to wait where he is, only to die moments later...

Lighting is probably the lowest scoring factor in the pack for me. The outdoor sections are fine, with the start of the map being dimly lit and brightening up as the sun rises in the later maps, but the interiors lack variety, often using a sickly yellow light and nothing else. This looks terrible in my opinion. For the interior spaces in future, consider putting smaller coloured highlights up towards the ceilings, under grates in the floor or in shadowy corners just to add a little variation in the colours on display.
This comment was made on an article that has been deleted.

UrbaNebula
Commented 1 year ago2020-04-04 10:05:42 UTC in journal: I modded my robovac Comment #102634
@JeffMOD, my wife is in the same boat. Her job is considered essential so she's got an official letter she needs to carry on her, in case she gets stopped. Meanwhile I'm stuck in the house with the kids.

What projects are you guys getting up to whilst isolating?

I'm working on a mod at the moment. Started it a little bit before the isolation kicked in though.