Its pointless to discuss this anyway why don't we just stop ?

Thats the attitude America has every time a tragedy occurs. Is it at all surprising that these tragedies continue to happen America? Some things never change I guess.

Seems to be interesting and quite action-packed. BRAWWWWWWWUUUUUUMMMMM ( really, does every movie need this audio effect these days?)

I think thats pretty much a requirement for a production company to pick up and run with any proposal they get.

Honestly? I always thought it looked a bit shit. Whilst I imagine it was in at the time, it just makes him look like a massive nerd now. Which does give it some redeeming factor (nerds ho!), but its a bit too outdated for my tastes.

(to clarify, I am referring to his haircut when he was in the Beatles)

Never owned one or used one, so not a whole lot to say. It looks okay I guess, but I never cared much for portable gaming devices anyway.

lol, I just noticed that myself :P.

A pity you can't make private ones and invite players in, Then we could make a TWHL game.

I is sad Panda

needless to say, my drawings are terrible.

38_98
Posted 7 years ago2012-03-03 19:26:37 UTC in Minecraft Post #303908
I downloaded the new patch today, didn't bother reading the notes. I didn't notice the fact that Zombies can now break down doors. Or that they raid villages. Not fun when you take shelter in a nearby village first night of a new game because you can't be bothered to build a house, only to find zombies busting down the doors en masse

The moral of the story is read the damn patch notes.

Tried out the cracked version some hours (got to lvl 14) and there were like a thousand bugs, made game unplayable.

Chill please, I wasn't discussing anything, just saying I got cracked version and there's a lot of bugs in it. Btw seems very easy to get banned here, if you have a rule like that.

Me, him and LaChance's ghost form the trio of assassins. Fun times.

Milestone! I've reached a length of 200 blocks with my Bridge to the Unknown. I already used over 1200 blocks. Won't be the longest bridge as somebody's already light-year long uniting several biomes...

That Bridge is mine. I made it as I progressed following the Eyes to the Stronghold/Portal to the End.

Perhaps one day I'll make it into more then just a 2 block wide floating road.

38_98
Posted 8 years ago2011-11-27 02:51:04 UTC in Minecraft Post #301100
"lost" spawns you on a mushroom island, in which the land is covered in mycelium, there are only giant mushrooms that grow naturally, and in which the only creatures that spawn in both night and day are mooshroom animals.

Try playing that one

Dragon attacking city, me attacking dragon with magic, kill a hen in front of it, guards kill me.

The lesson is: Don't ever fuck with their Hens.

I've decided I'm going assassin/thief build. One of the sneak perks gives you a 6 times crit on a surprise attack with a one handed weapon. Sounds pretty cool.

Ah thats nothing. Wait till you get the perk further along called "Assassin". 15x sneak damage with a dagger, working out for about 30x damage dual-wielding.

Thats about twice the damage you would get sneak attacking with dual-wield one handed swords, axes etc.

I've just wrapped up the Dark Brotherhood questline. Very fun, except for when I had to rush back to the sanctuary after the betrayal. I arrived outside to find several Pentalus Oculatus agents who attacked me and the ghost of LaChance, then their horses suddenly started attacking me, probably caused by a stray arrow of mine, then some stupid Spriggan, and then a Dragon dropped in and started burning shit up. What was supposed to be a simple surprise attack on some agents turned into a battle royale.

It was the most hectic and funniest fight I'd ever been in, if very difficult. Fucking Dragons.

That mod would be such a tease if it increased the breasts of the men and not the women.

That would be the most epically hilarious thing ever.

38_98
Posted 8 years ago2011-08-13 19:02:45 UTC in London Riots Post #297885
4N!M4T0R, why are you complaining about this? Seriously, what is the point? Various peoples of ethnic and racial backrounds have been traversing around the planet and mixing ever since our nomadic days. The is hardly the first time Muslims have been in Europe. They've been here and made their influence felt for at least 1000+ years. The great cultural death that you expect will never come.

38_98
Posted 8 years ago2011-08-12 21:59:43 UTC in London Riots Post #297799
I view the racial side of these riots as the result of a long standing self-fulfilling prophecy that our white society has stood by since we first began enslaving them. We expect them to be barbaric, to be monstrous, to be criminals, treat them as such, then express shock and disgust when, lo and behold, they become what we always thought of and treated them as.

Treat a person like an animal long enough and they become one, as the saying goes.

In these poorer areas, they don't educate themselves properly, in these poorer schools of theirs a lot of them don't get their grades because they choose to mess around rather than study

Of course, and no student of any other color ever messed around in School, right?

Blaming the individual for systemic failures is an exercise in futility. Until we pull our heads out of our ass and look at the picture as a whole, instead of a single portion like who-knows how many racist idiots in this world that I've seen, we'll never get down to ironing out inequalities in our society and fostering understanding. It's simply impossible.

The only other path avilable at this point it seems is to simply ostracize ethnic communities further and accelerate the fearmongering. And need I remind you what happens when someone decides to go all the way with such insidious rhetoric?

I guess I shouldn't be surprised that this issue has degenerated into "Their black! What did you expect!?" drivel. It's not like humanity was ever really good at dealing with shit like this to begin with.

As Striker has already stated, by the time we develop cures and eradicate all disease, we probably will possess the technology and capability to go to other life-sustaining worlds, in our solar system and others. This should, hopefully, lesson our burden.

I found the movie buried under a pile of old DVDs and decided to watch it. I was not disappointed. It was an excellent film, particularly the final act, which made me sob.

It doesnt give all the potential reasons, and just skims those that it does, but it does provide some actual explanations instead of conjecture.

They are given all of these. At the expense of tax payers.
They choose not to improve their lives because their lives at the moment are far too comfortable. 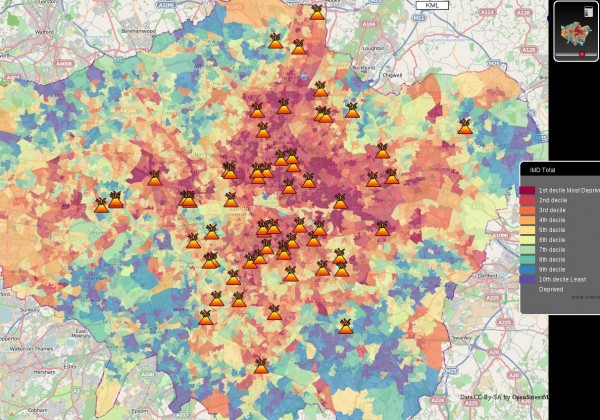 The red areas represent the most socially deprived areas. The darker the red, the worse they are. The Volcanos represent where the riots have been. Coincidence?

The survey itself comes from a government report, found here, which give a viable source for discontent not just in London, but around the country in other riot-hit cities. Their lives are anything but "comfortable".

Oh, and heres another report on the correlation between austerity measures and anarchy:clicky. Make of it what you will.

P.S that documentary series looks quite interesting Archie, thanks.

38_98
Posted 8 years ago2011-08-11 00:10:10 UTC in London Riots Post #297687
I'm not surprised to find most of the rants aimed against the rioters place virtually no thought into the socio-economic reasons behind these events. It's easier, after all, to refer to stereotypes and look only at the worst then look at the whole and tackle it as such.

Such is the history of civilization I suppose.

On the plus side, the L4D mapping quote made me lol

Well 38, they can't just stand by and watch now can they?
Things would probably get even more out of hand if they didn't attempt to take down the worst mobs.

I'm not talking about the response by the police to flood the streets of London with 16,000 officers. I think that was a smart idea as it effectively intimidated the rioters into standing down and preventing additional chaos. I'm talking about those who have been calling for ridiculously harsh measures. Things like openly firing on crowds, calling in the army etc etc...

Someone I don't see such extreme measures as these as doing much to calm the rioters. Particularly those who rioted because of abuses by police.