Random events are something that may be tricky to create in Goldsource. Of course, you can use timed events to make things seem random, but it's time consuming, and ultimately isn't the same as a real random event. Fortunately there's a trick that allows you to do proper random triggers without any custom code required! This tutorial will explain how to do it, and suggest some uses for the technique.

The basic components you need are as follows: An env_beam entity has a flag called "Random strike" which is what we will be using to achieve the random effect. When this flag is enabled, the beam will, as you would expect, randomly strike the targets.

Knowing this, the set up is fairly simple. All that needs to be done is to place the func_buttons in the path between the two info_targets that make up the start and end of the env_beam's path.

Take the following steps: This will make env_beam damage the button, which will activate it. Then all you have to do is set up the button to trigger whatever you want it to do!

This is the entity set up: 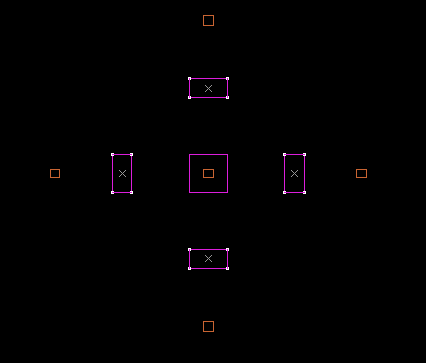 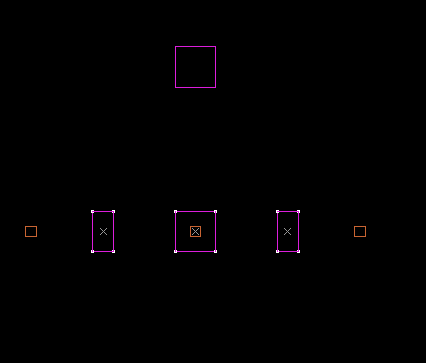 2D view side
And here is a 3D image with explanation: 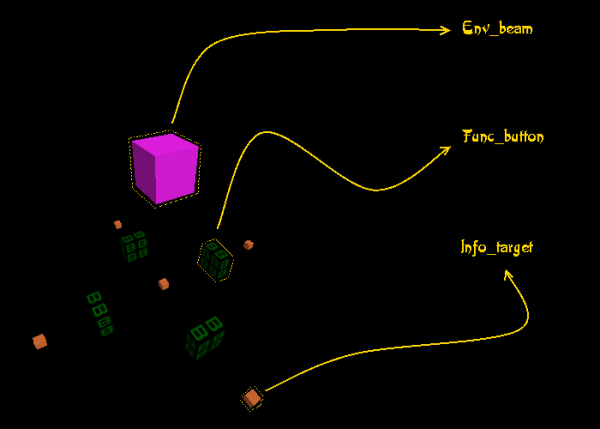 3D view illustrated
The most important thing here is the "Random strike" flag on the env_beam. It allows it to randomly pick the ending target of the beam.

For example, say there were 4 ending targets for the beam, each target would be decided randomly each time the beam strikes. Of course, you can have as many ending targets as you want!

Take a look at the properties on the env_beam: 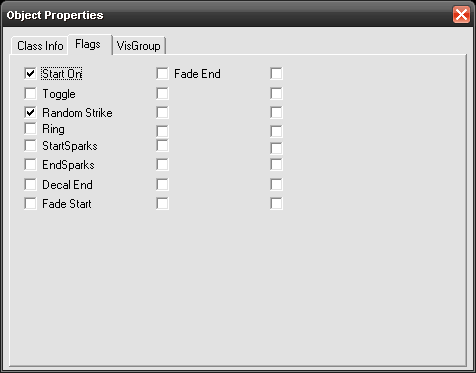 env_beam flag properties
This is the flags tab, and as we see, the main flag we need, "Random strike", has been turned ON.
Also, in this case, env_beam is set to be ON at all times, but you can toggle it however you want as you normally would. 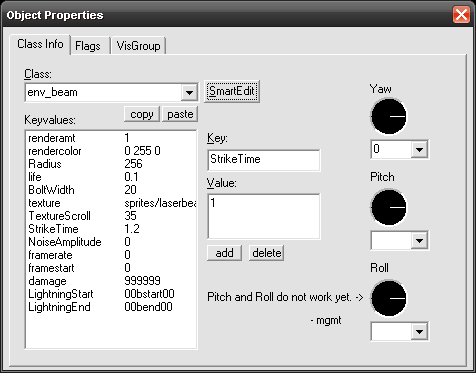 env_beam class properties
As we see here, the beam's start end targets are defined as 00bstart00 and 00bend00 (which are the names of the info_targets). The damage is also set to 999999 (be safe and set this value high, as lower values sometimes may not work). The "Life" and "Strike again time" values are set as well.

The "Strike again time" value is the time between each strike of the beam, and the "Life" value is how long each strike lasts (no more than 0.1 seconds is needed for this method).

You can also take advantage of the "Reset time" property on the func_buttons - meaning that you can make sure that the random beam doesn't trigger your button too quickly.

The env_beam entity uses the "Random strike" flag to achieve random activation of buttons, which then go on to trigger another entity. You can control the speed of the events with the "Strike again time" on the beam, as well as the "Reset time" on the buttons.

This technique can be used to trigger anything that a button can trigger. One example is randomly swapping teleport locations in a map, like in this example map.

If you're still confused, the example map contains everything you need to know to find out how to use this setup!

Penguinboy
Commented 10 years ago2011-10-11 19:23:58 UTC Comment #101034
Note that while the content of this tutorial was written by Stojke, I have HEAVILY edited the text to make it more readable. I'd fix the typo in the 3D screenshot (it says env_laser instead of env_beam), but I'm too lazy.

DiscoStu
Commented 10 years ago2011-12-29 06:54:01 UTC Comment #101040
Just one question: Do the info_targets need a name? Do they have to be all named the same? Or a different name each? Or no name at all? I always wondered this when someone talked about this method.

So, you have 2 entity names, start and end, where all ends are named the same. Thats how the program choses randomly.