@Koe1 Holy balls that is ridiculously good. Though I hope said mod works with LD models as well.

No solid estimate on release.

Oh. I wish I could start to play a good new singlepayer mod for old HL again, and yours look brilliant my friend!!

BTW: I have finally finished the menu background map, it has all of the ships and the cinematics play as they should!! 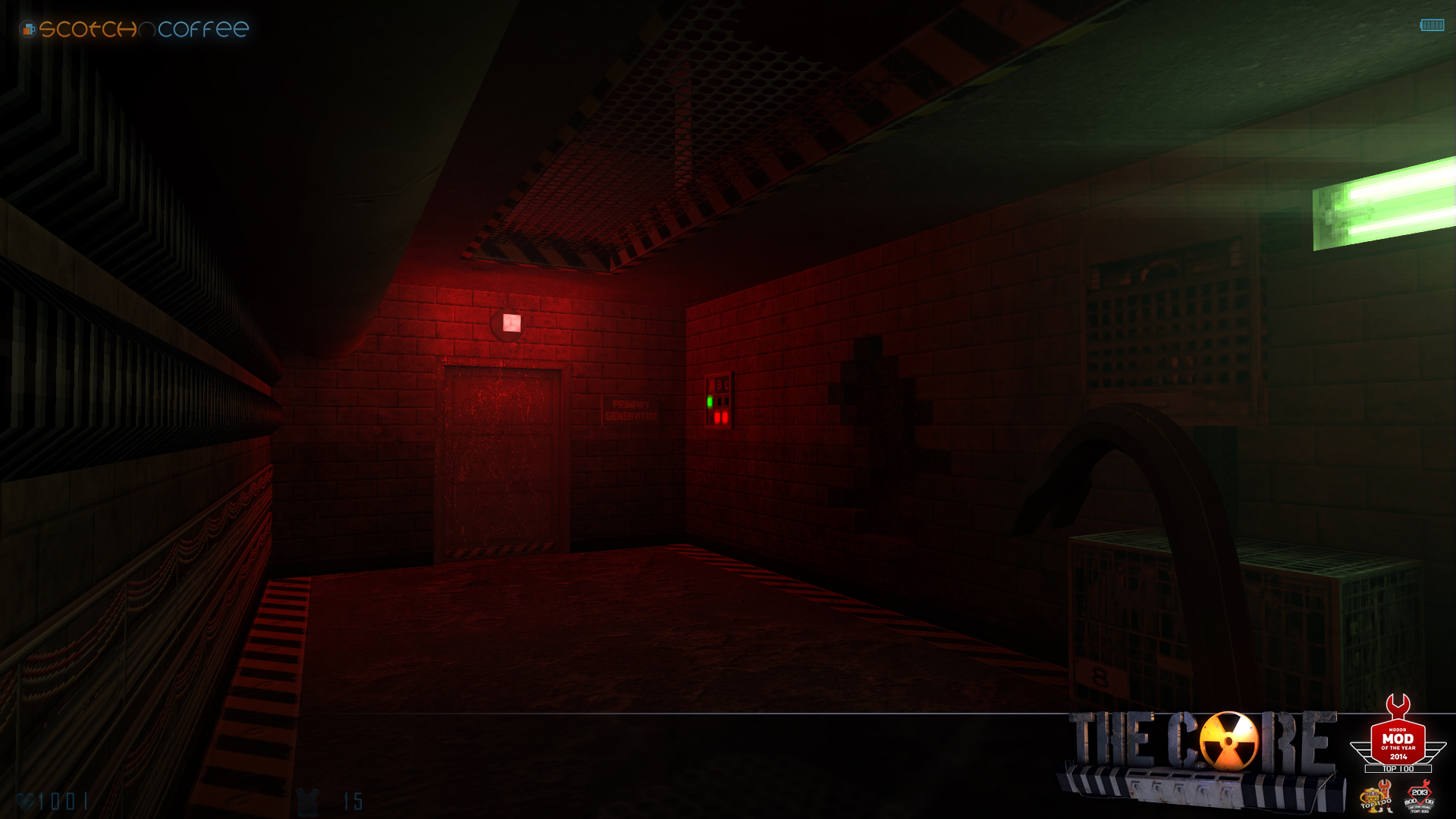 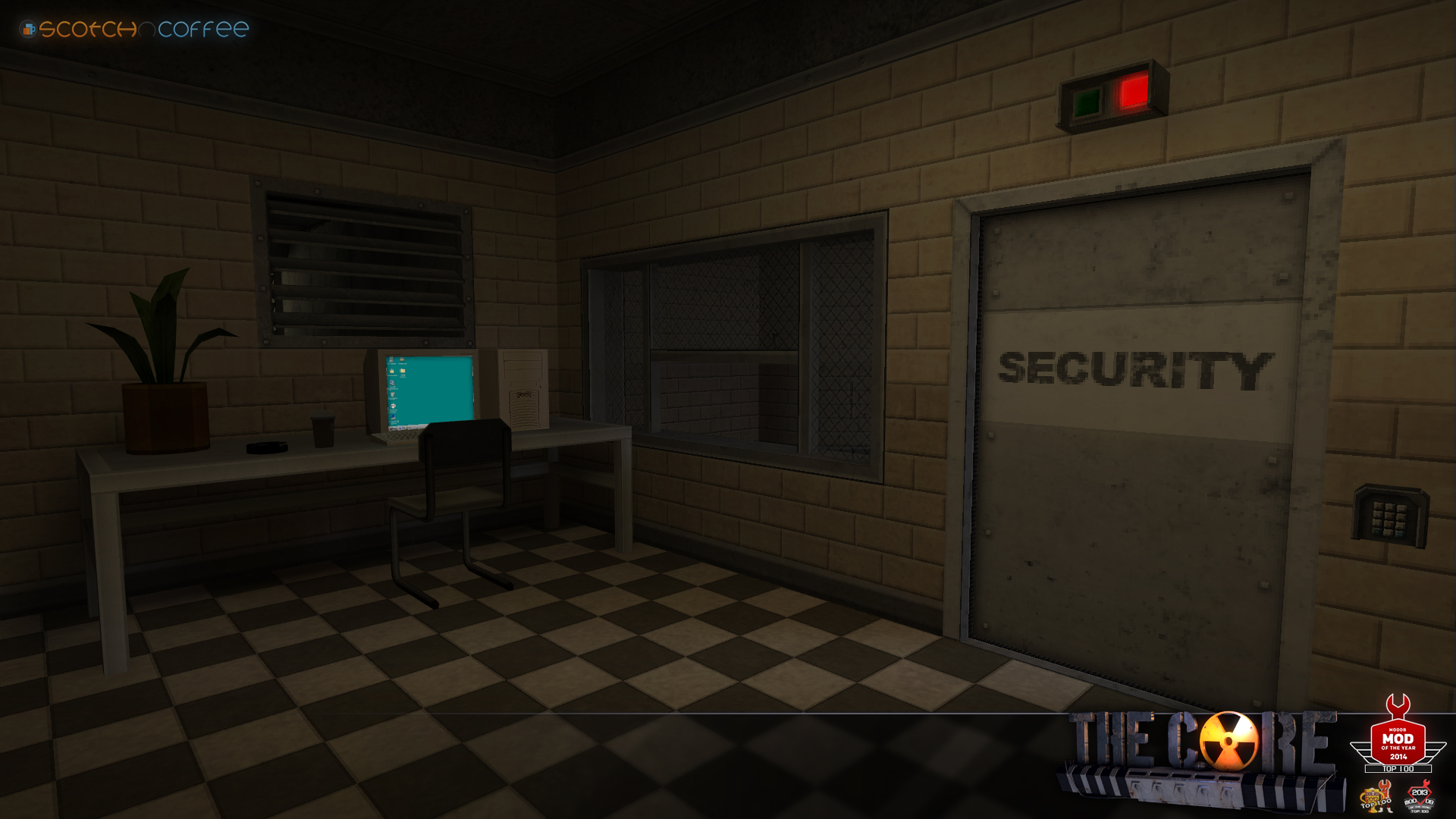 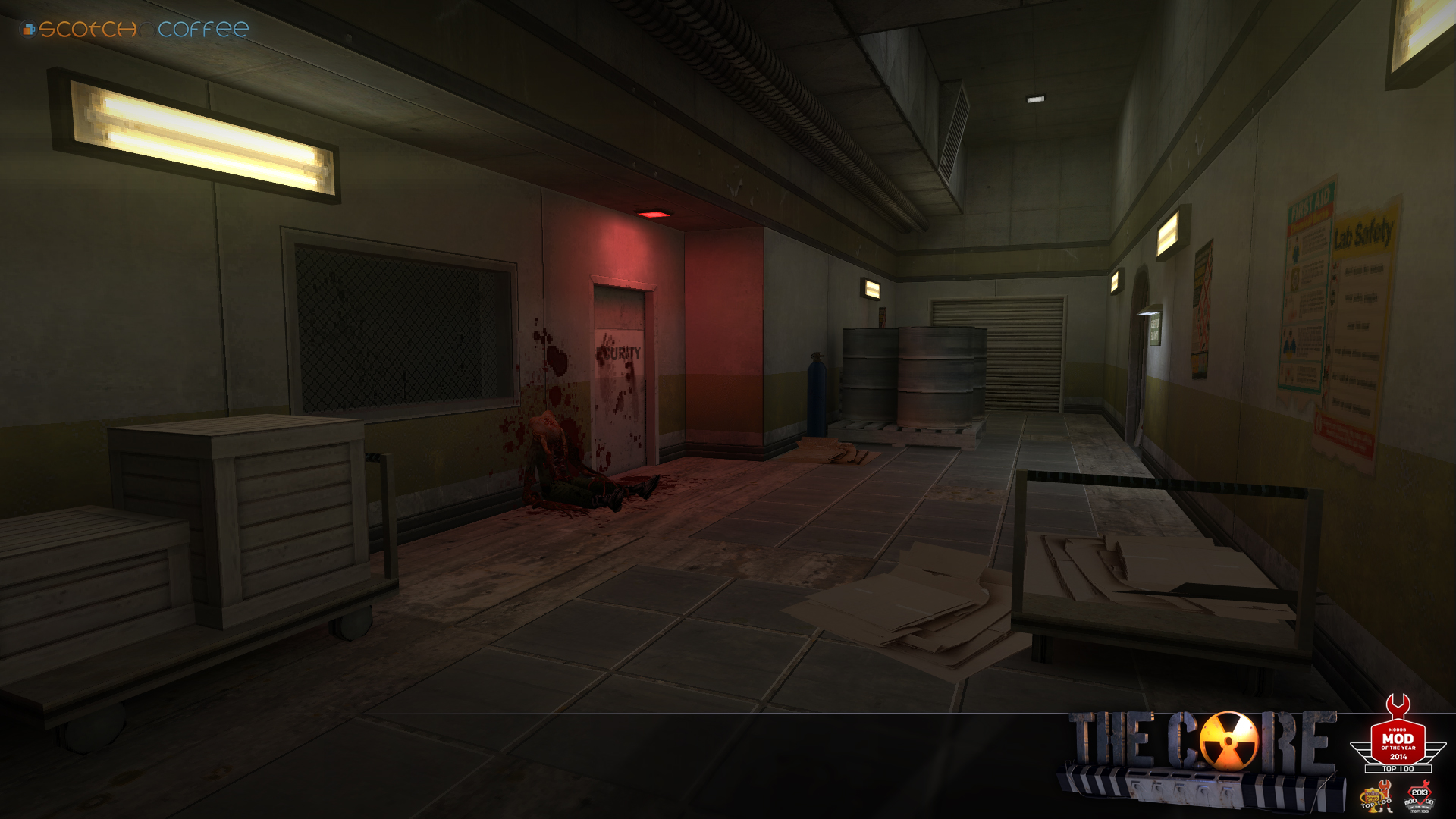 zeeba-G
Posted 2 years ago2020-03-02 20:02:46 UTC Post #343837
Ha, I dream about maps too. I was dreaming about Endless Rain Scientist Hunt a few nights ago. I will post a video of the map on youtube tonight if I can get OBS working in Lossless quality for those that would like to check out my favorite map.

zeeba-G
Posted 2 years ago2020-03-03 00:43:11 UTC Post #343839
I agree Bruce, but no one is going to download that mod to play it. Maybe they will if they see it though. I don't want to post it though unless it's with perfect quality and yes I know about the secret. Fsr, noclip doesn't work in Scientist hunt though and you need more than one player to see the secret. Guess i'll have to show that part in half life or something.

Well, some parts of the skin must be completed, but the model has all pipes and parts which were left undone in its previous version of year 2015. 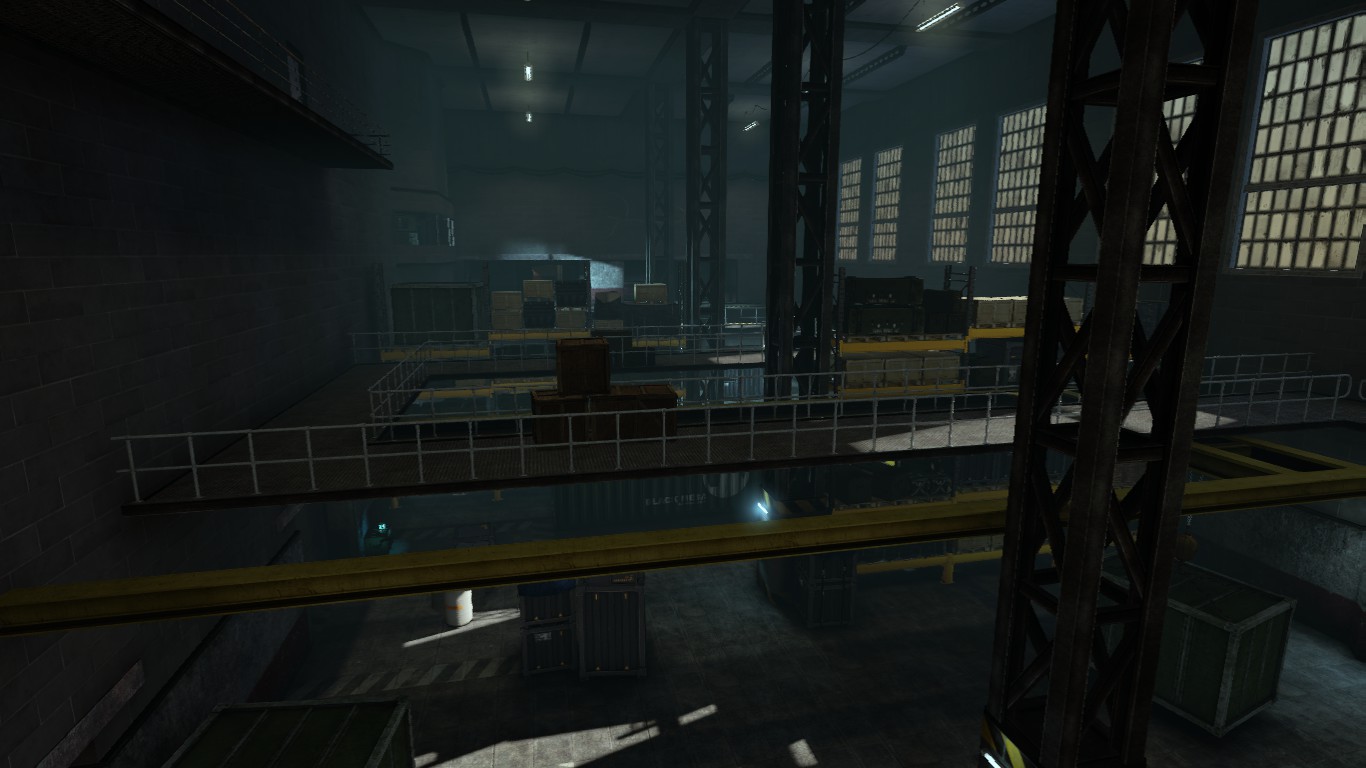 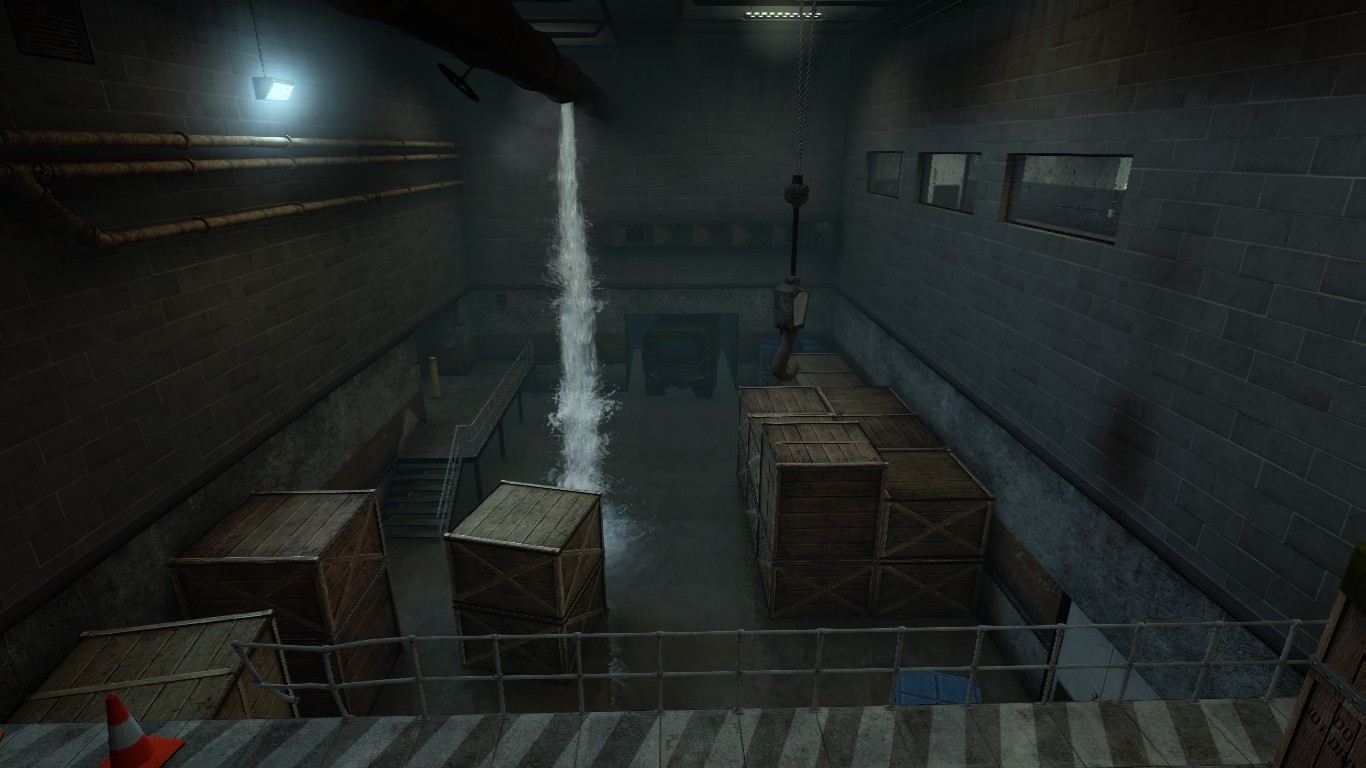 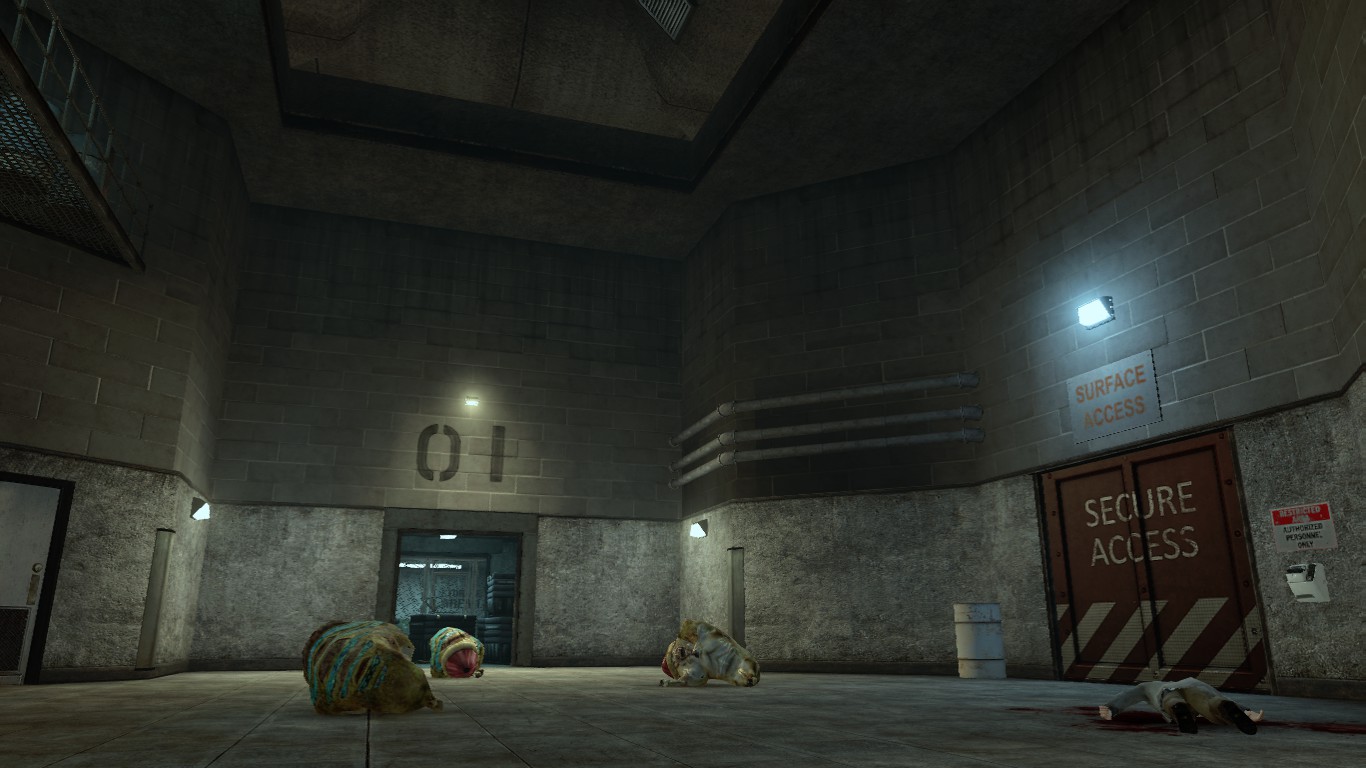 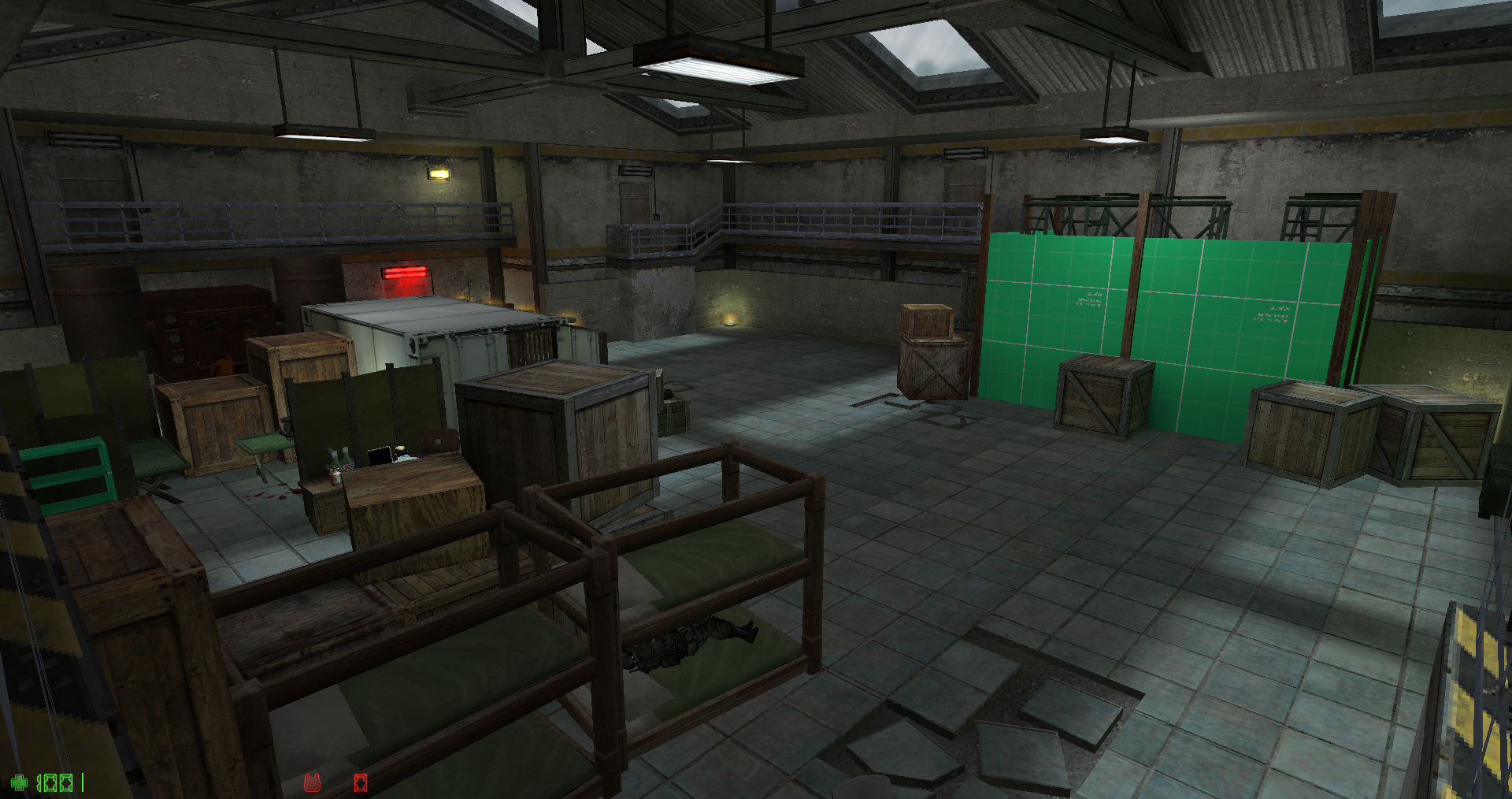 HUB IF THE PIC LOADS
EDIT^ I'm not familiar with this kind of forum posting... The image is hyperlinked but not showing up in the post. Stress-testing Hammer a bit with a custom tool and recursive templates: 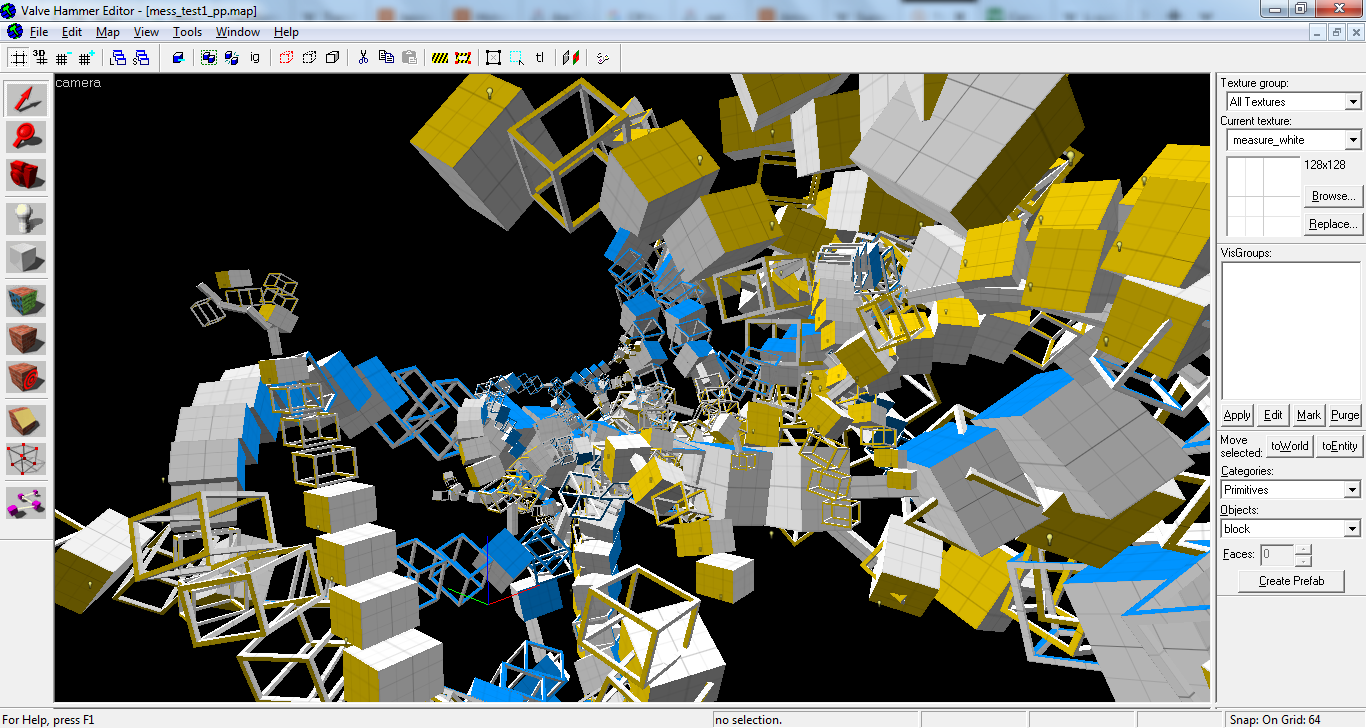 I don't think I want to compile this though...

I haven't posted anything of my own in here for some time, hmmmmmm. :3c
Time to change that. 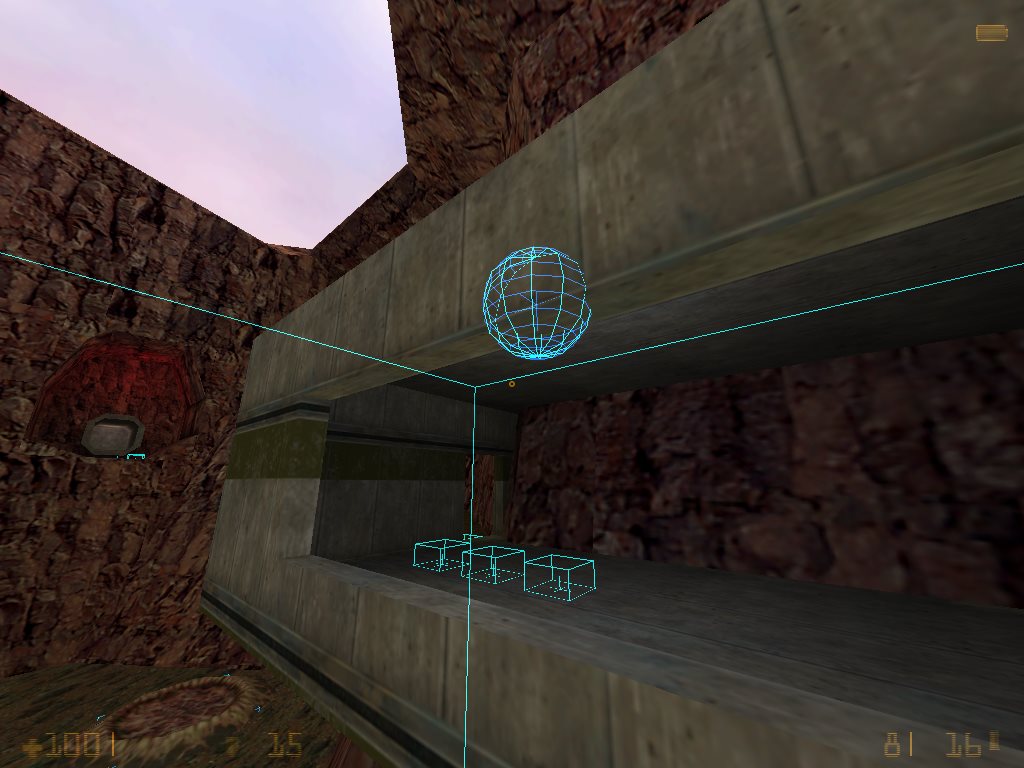 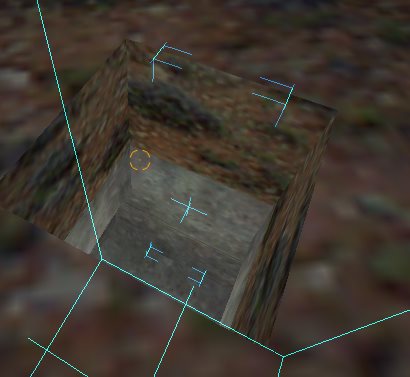 Some more progress on my old Quake map (it's been in sporadic development since 2017): 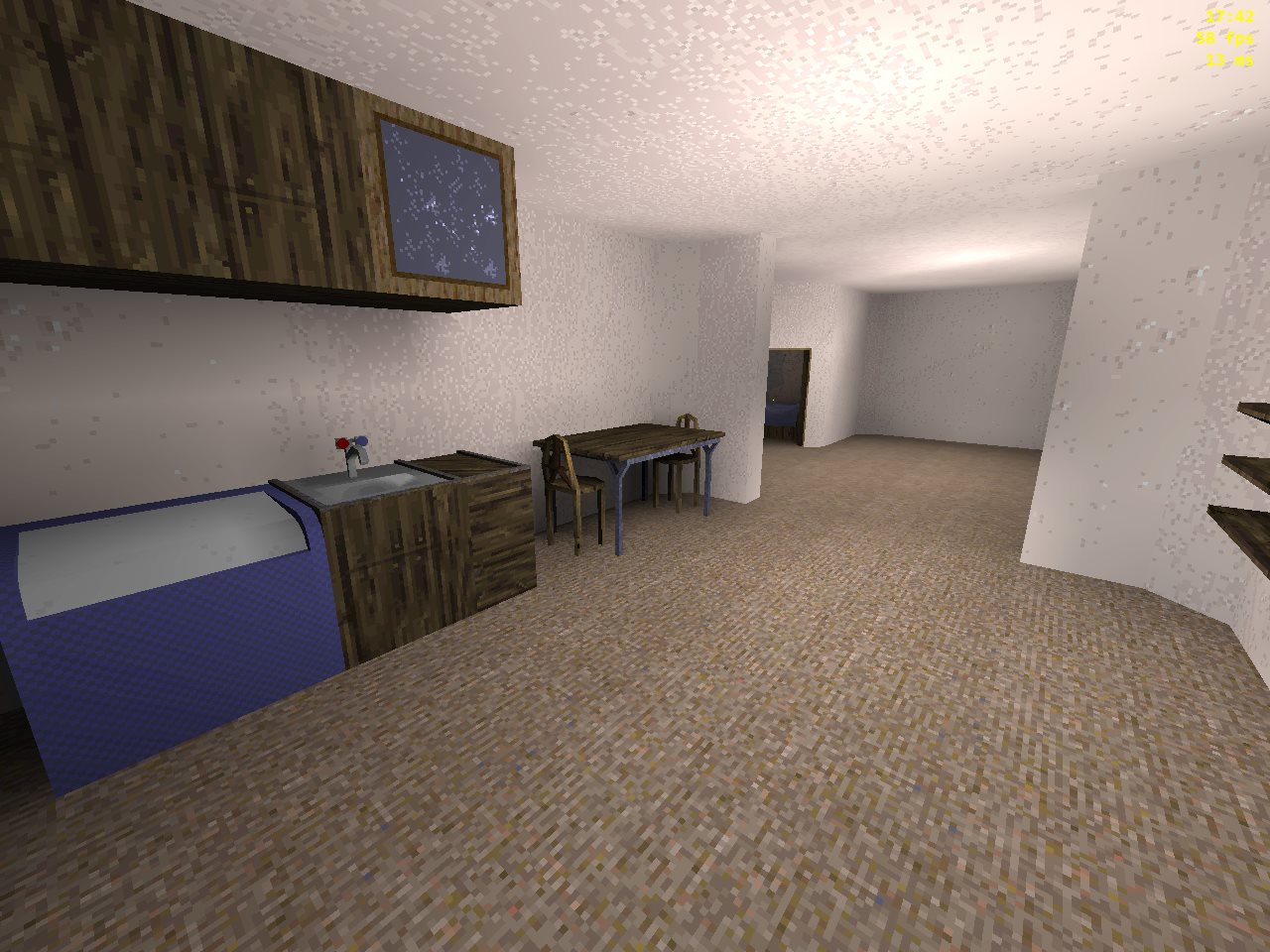 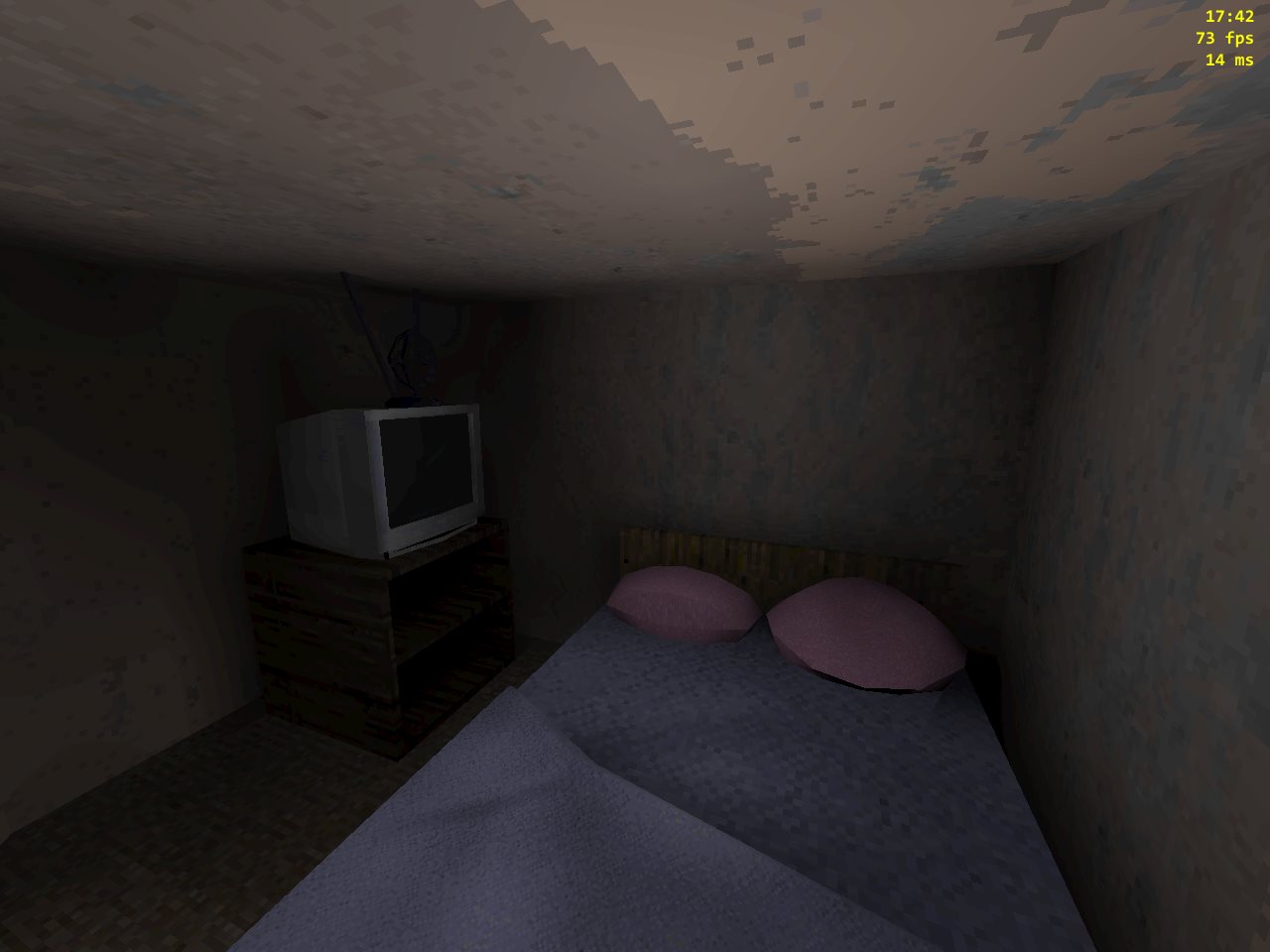 While testing Advanced Development Mod with my brother one night, we decided to play on the 57k x 57k units map. Dang. He looks so small from a distance. 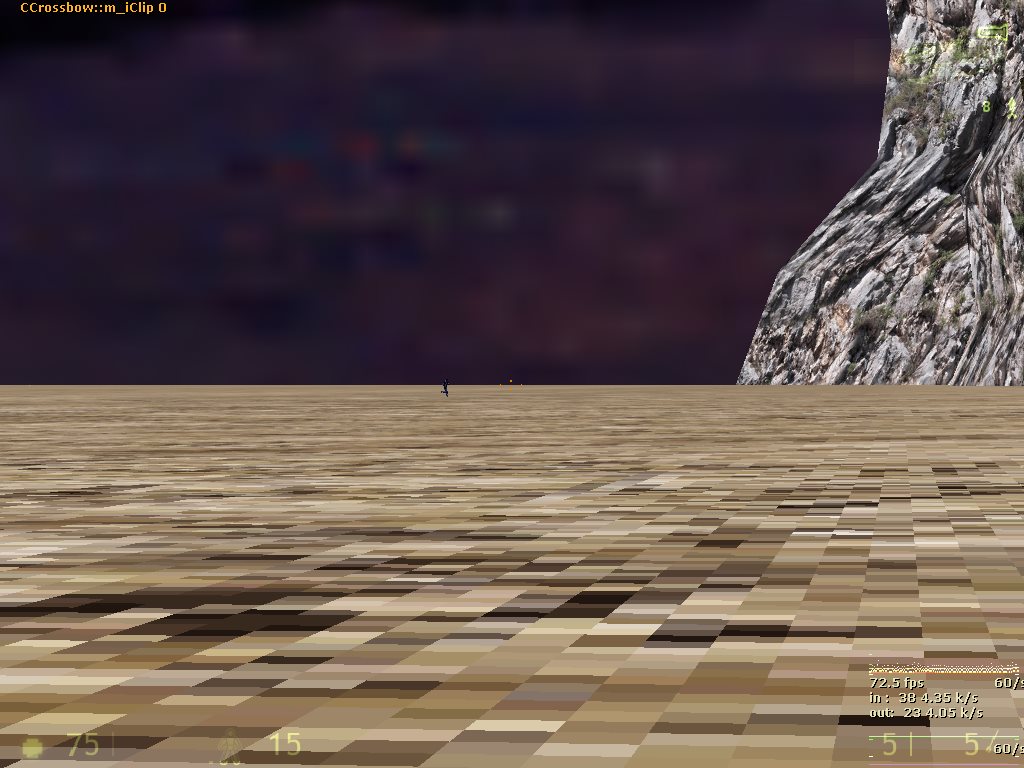 Outside of Half-Life, I'm planning to start a 2-in-1 project with CryEngine 5. It'll be a game, but also a "game system", if I could call it that way...
The main thing about it is that it'll be a full-on FPS template that is good for beginners and people who are coming from GoldSrc and Source. The main thing about it will be the way entities work. I want to achieve something like GoldSrc or Source's trigger system in a modern engine.

And as a mini pet project, I am converting idTech 3 to C++, bit by bit. I've had success since the game, client and UI DLLs are in C++. The engine EXE and dedicated server EXE are also in C++. Now I just gotta actually C++-ify some parts. Efforts have been made in the entity system, since there's an engine entity interface, for example. There's a lot of work to be done, but yeah, I'm pretty happy with it so far.

I have a plan
Posted 2 years ago2020-08-04 12:02:22 UTC Post #344594
@Admer
I'm really looking forward to all of the stealth additions (Rocks, AI distraction, etc), physics, map extensions, time cycle entities, Fmod and vehicles. as well as the func_novis (which is actually a thing in CZDS, Func_stealth).

Oh! and the tools, lockpicks and the such!

"Oh! and the tools, lockpicks and the such!"

Oh wait, don't get it confused with Utopia at Stake. xD
They're not the same thing, albeit UAS will be based on ADM.

ADM is the base which will have FMOD, vehicles and a bunch of other entities, while UAS is gonna be a total conversion mod that will actually introduce the new tools, weapons and such stuff.

The upcoming release will basically be ADM 0.1 alpha. This means it should have the following ents: (some of which aren't yet implemented, but will be there soon) And some vehicle entities: chair, couch, bathtub car and a simple helicopter with a few seats (which is not yet implemented).
Other than entities alone, it should support up to 65k x 65k x 65k-unit maps out of the box (although some effects like explosions don't yet work outside of 8192 units).
I'm planning to host a testing session live with some buddies on TWHL Discord, too, right about before this gets released. It's either gonna be crazy, or it's gonna be a disaster. Maybe both. 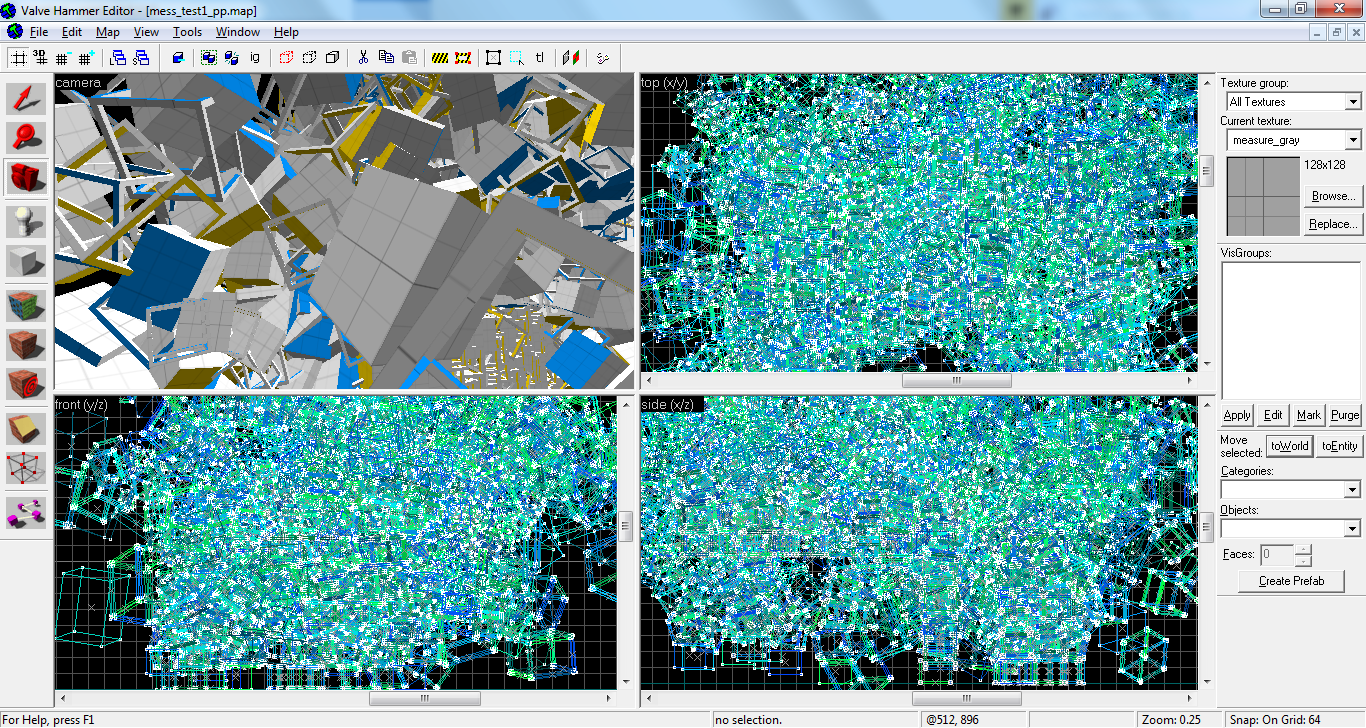 So I'm working on some macro entities that can quickly cover a surface or fill a volume with instances. Here's the source map. The blue blocks on the left delimit template areas, the big grey cube is a macro_fill entity and the grey/yellow brushes behind that are a macro_cover entity: 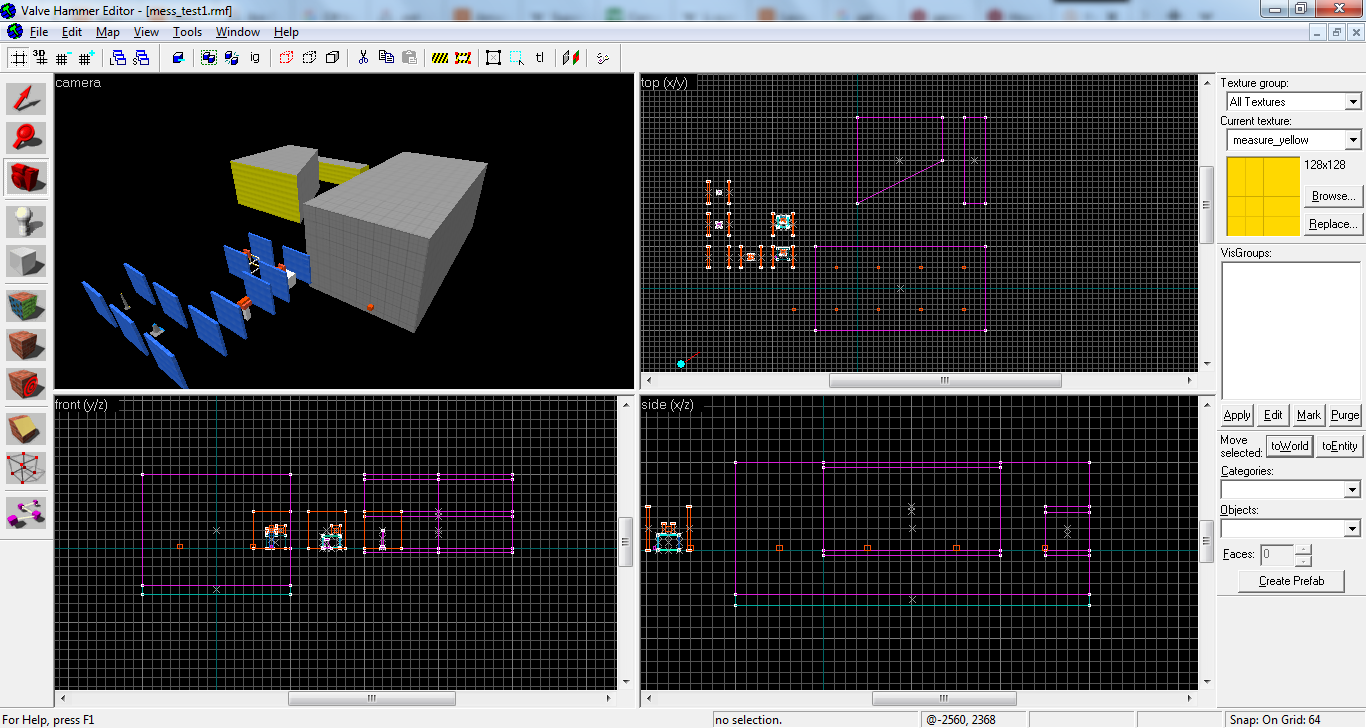 Here's what it looks like after it's been processed. The template areas have been removed, but their contents have been copied multiple times onto the non-NULL faces of the macro_cover entity and on the inside of the macro_fill entity: 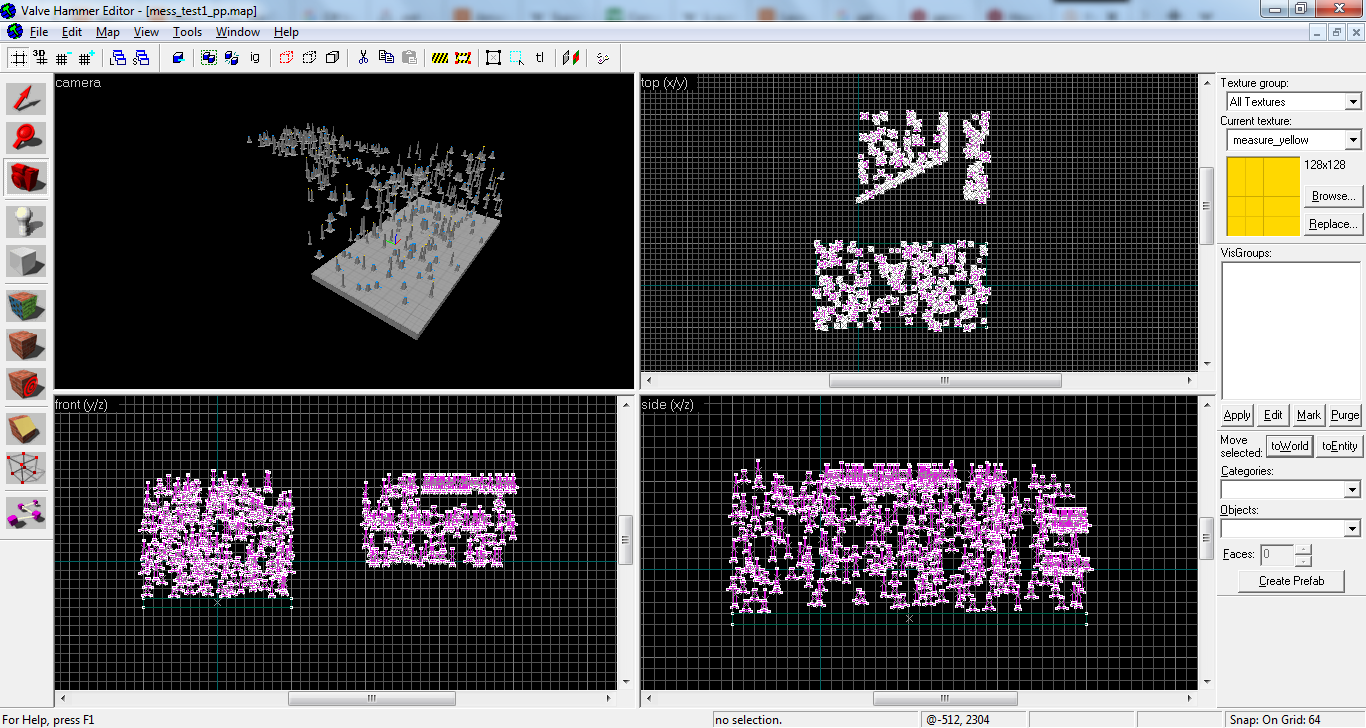 There's still a whole bunch of details to finish up, but the core functionality of MESS is pretty much there: creating templates (macro_template and macro_remove_if, or separate map files), inserting them at specific points (macro_insert) or using them to cover a surface (macro_cover) or to fill an area (macro_fill), and customizing them with an expression/scripting system. 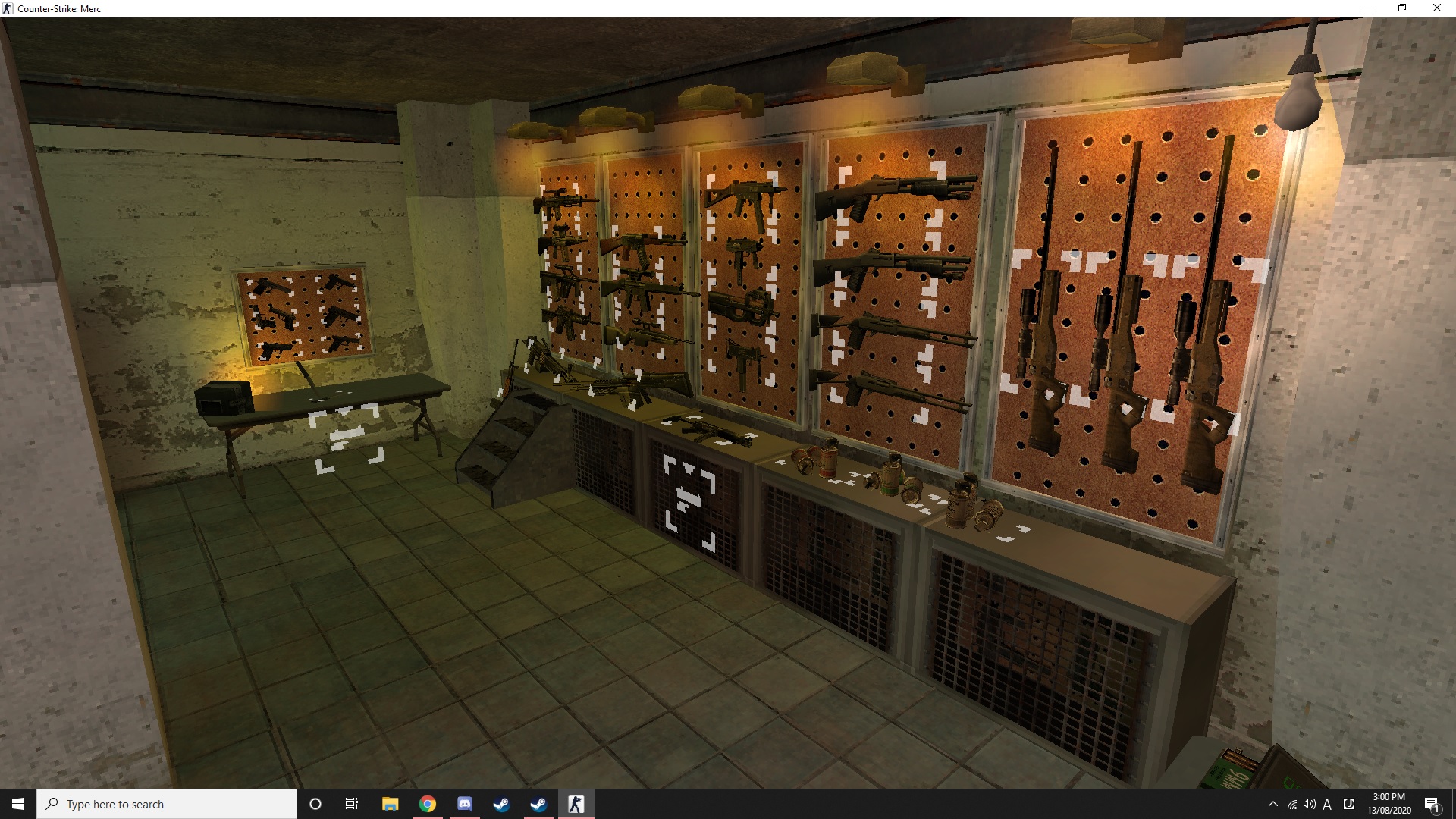 The armory
All the guns on the wall and such (marked by the square, of course) can be taken and used. The section that's not shown is the ammo and shooting range. 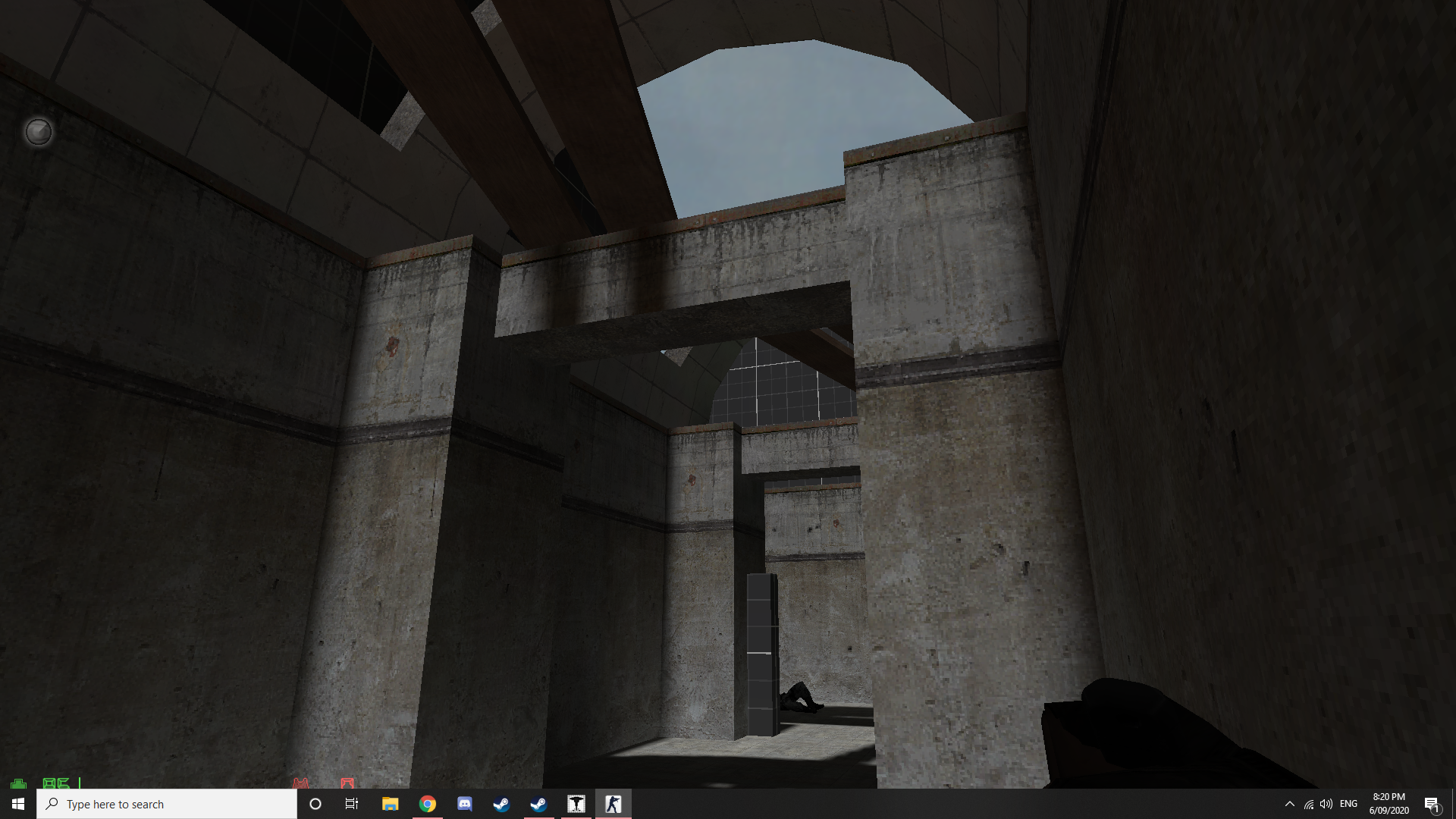 Shadows are a bit shoddy tho...

Recently, I've been experimenting with OpenGL and I'm pretty happy to have found out that modern OpenGL is, indeed, possible in HL.If I were to rewrite the entire renderer, provided I know what I'm doing, it could dramatically increase the performance, and allow maps to use custom shaders and stuff like that. Think about a shader for real-time moss growth.

However, before I can even think about working on such a renderer (which would replace the entire GoldSRC game renderer, except for the main menu, HUD and stuff), I'll have to focus on bugfixes in my mod base, and then on my ioquake3 fork. But, who knows, maybe it'll be there sooner. 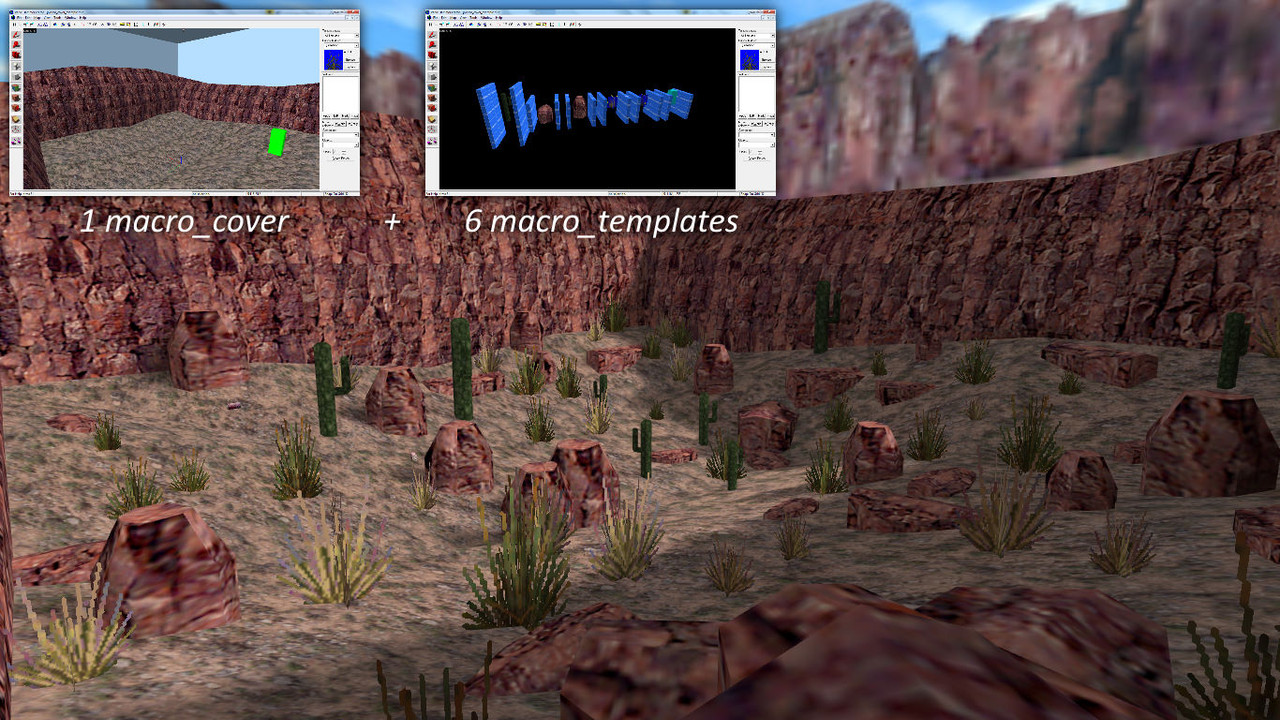 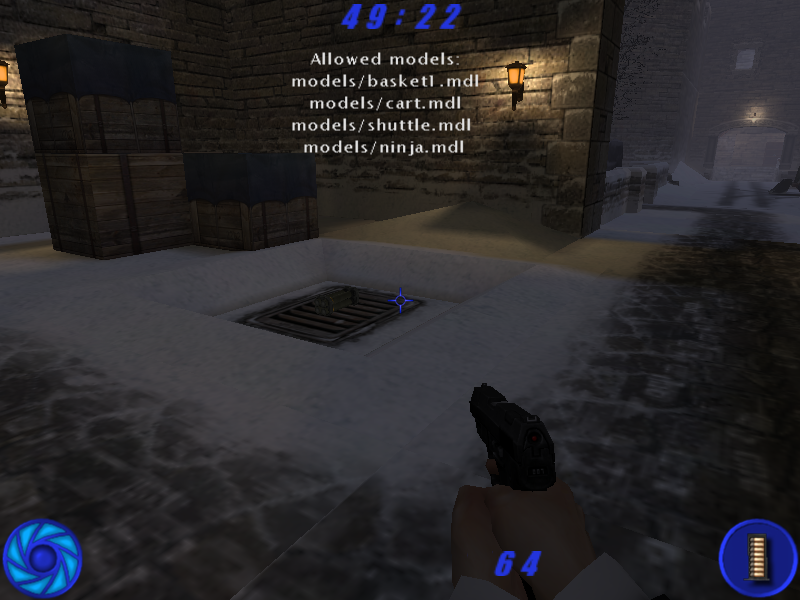 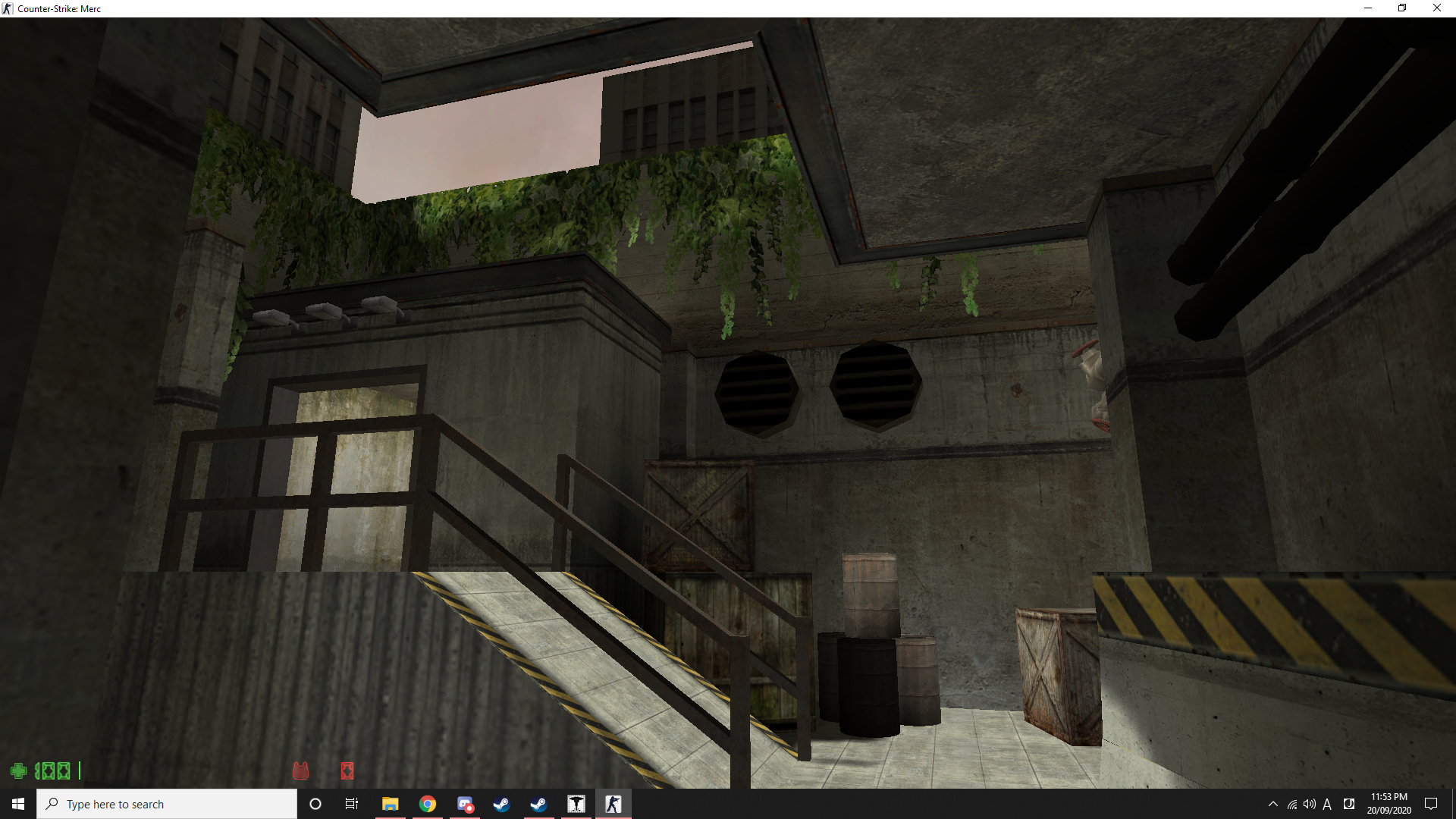 grenappels
Posted 1 year ago2020-10-01 04:57:55 UTC Post #344742
hi everyone, i'm new here! i recently got back into cs 1.6 mapping after 12 years off. i'm working on a gungame map called gg_twinmotels, it's about 60-70% finished. it's inspired by mid century modern architecture, a hotel i stayed in once called Tuve, and hiroshi nagai paintings. here are some screenshots: 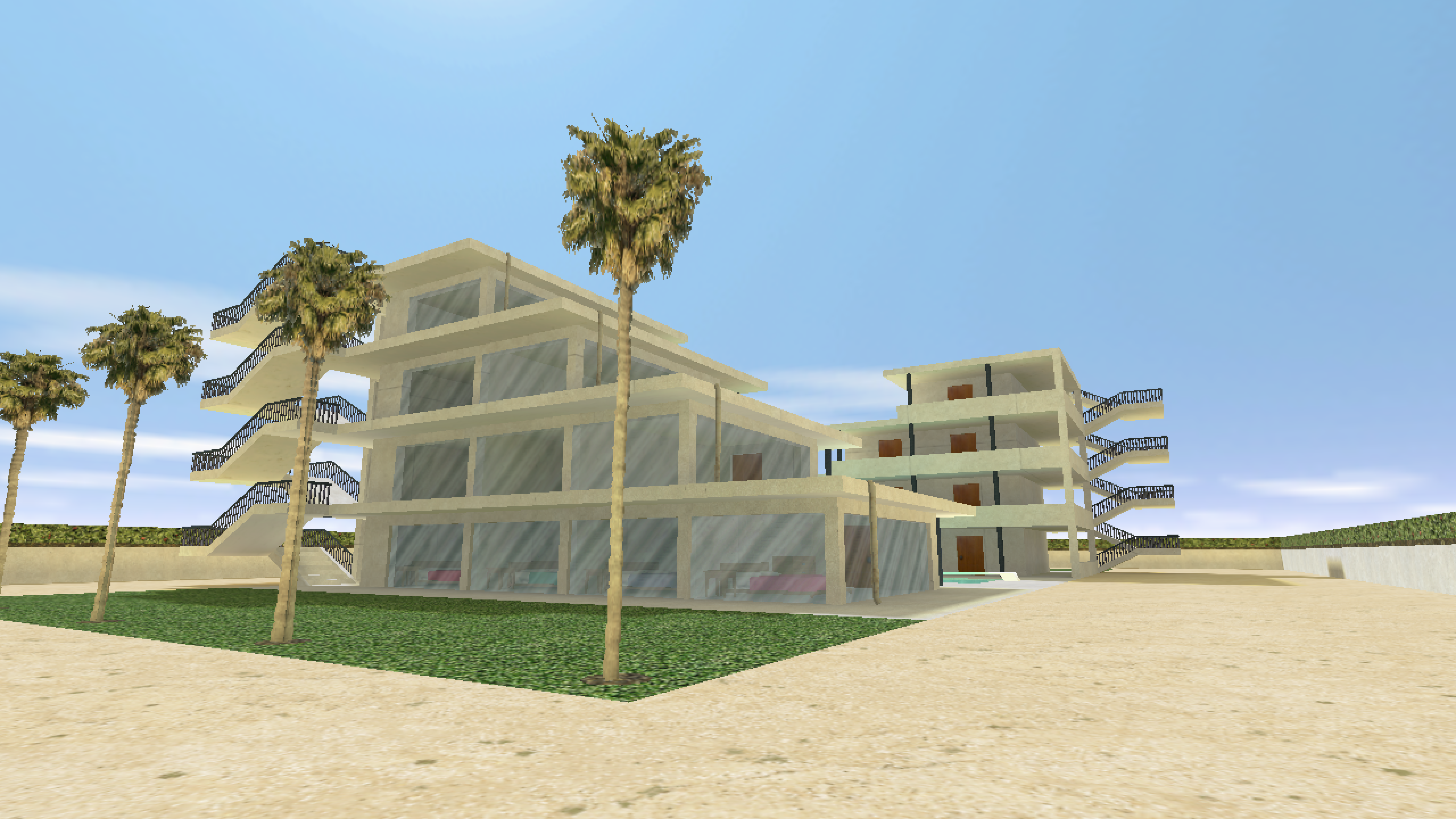 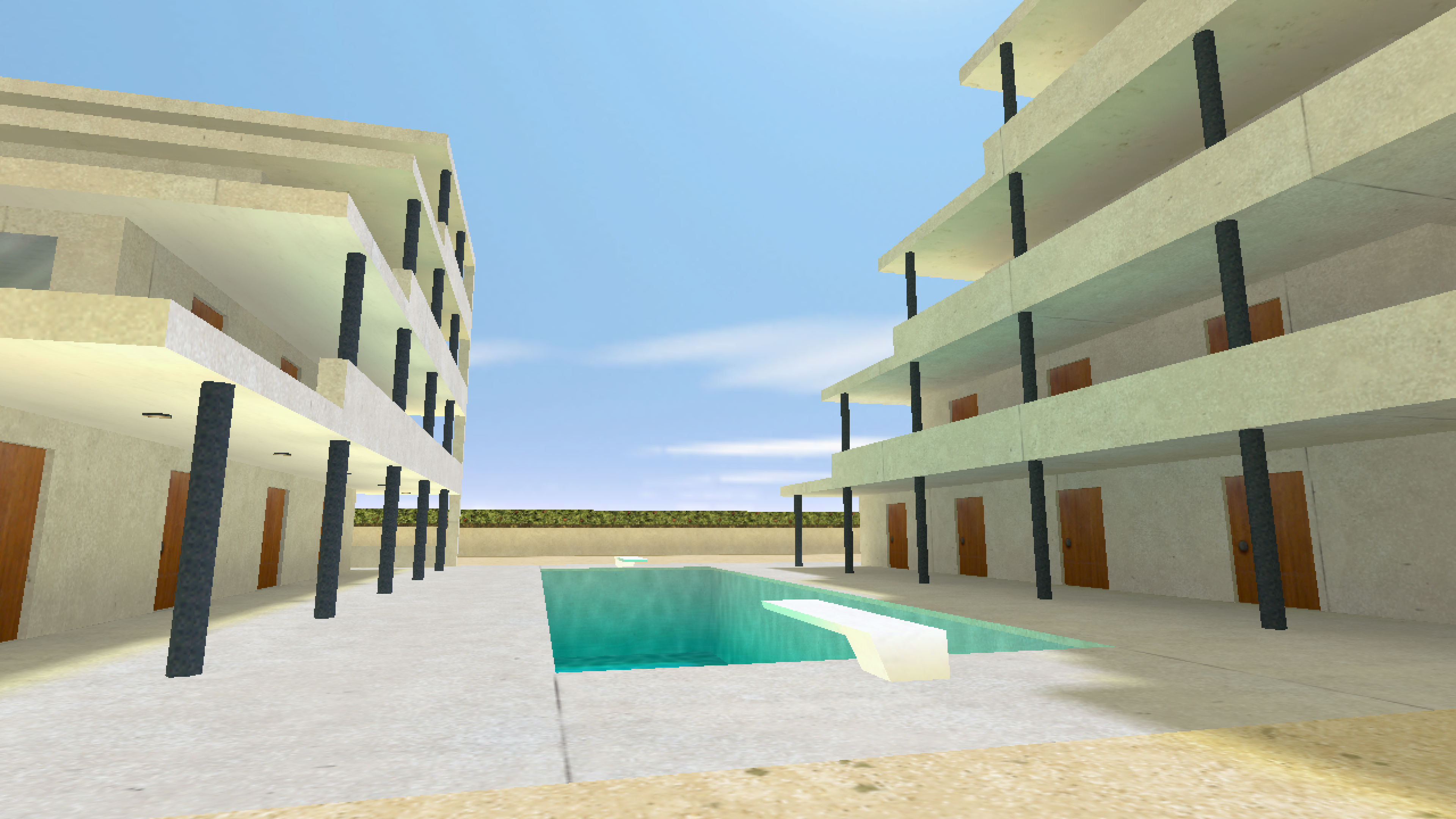 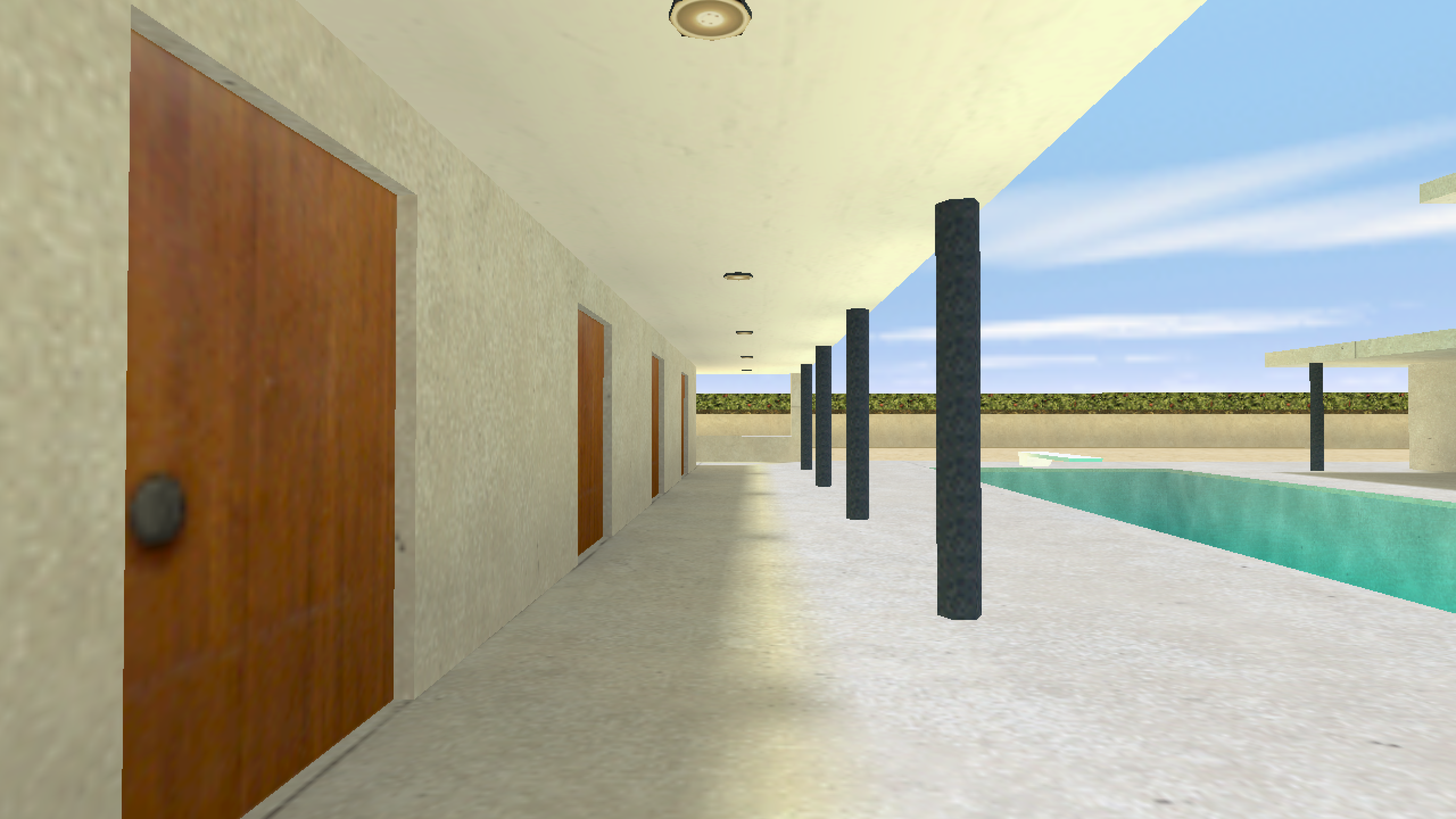 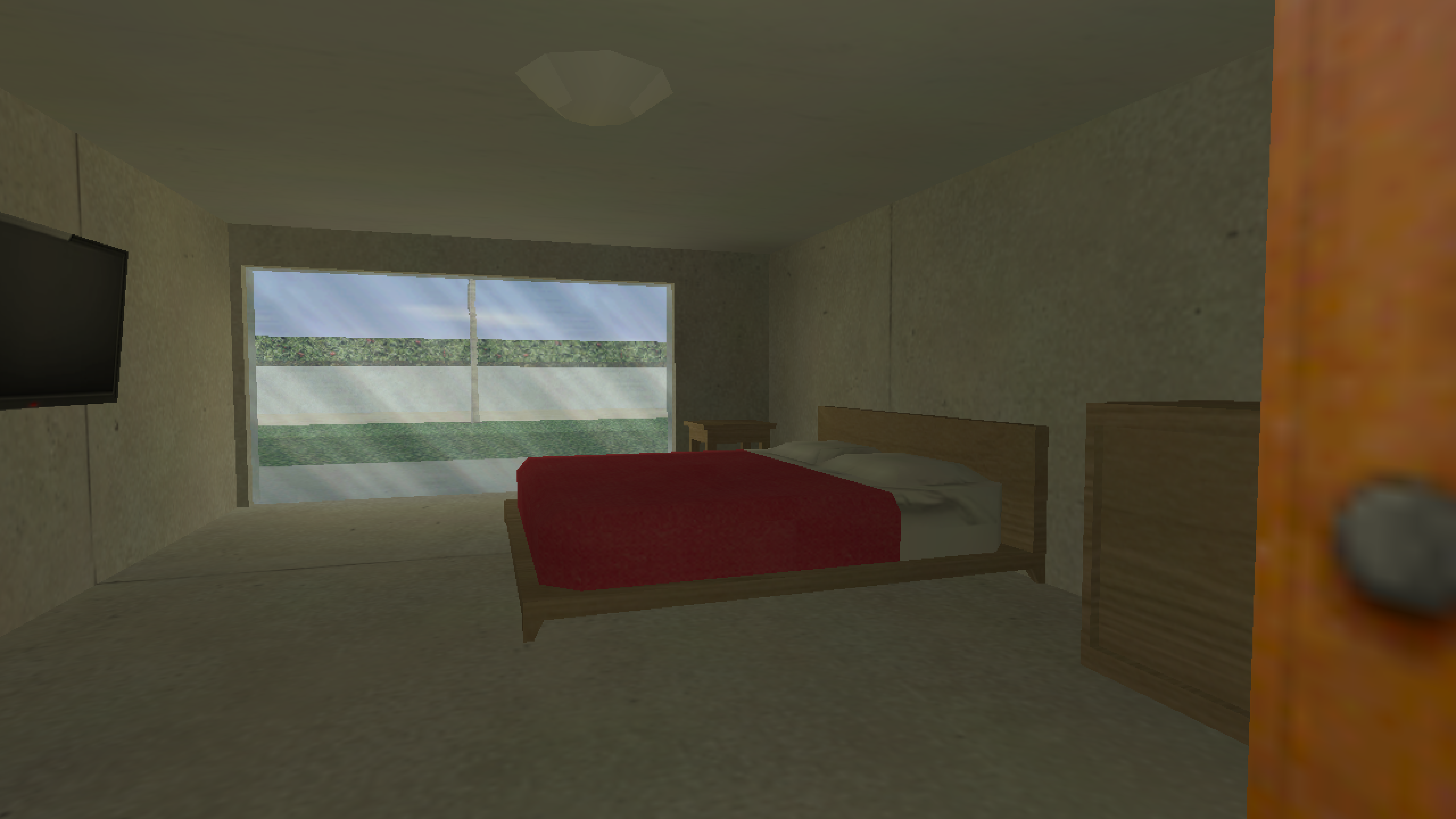