Admer456
Commented 4 days ago2020-10-20 12:55:03 UTC in vault item: 2020 Practice Comment #102981
Given these screenshots, I'd say it's a pretty solid work in progress.
It's always good to see someone learning by basically trying out everything the game offers you (in terms of entities), like I did when I started out. Definitely gives a very solid understanding of things and whatnot.

So with all that said, I'm looking forward to updates and stuff. ^^

Cameras are, really, just points in space with some extra properties (FOV, far clipping plane, near clipping plane). In the case of 2D, they just have an XY position, a zoom factor, and a single angle. So, if you'd like the camera to follow Spike, you'd do something like this: So what's gonna happen is, the camera grabs a reference to your current player, and tracks the position. So wherever the player moves to, the camera follows along. The real fun happens when you start experimenting. This will make the camera never move up'n'down, only left-right following the player, just like Super Mario Bros. for the NES. xD

Keep in mind that I got no Unity scripting experience so this code won't apply, it's more like pseudocode to get the idea across.

My only complaint would be the very noticeable usage of FL Slayer in that song, assuming you made the song. I'd recommend getting some clean electric guitar samples (actually, FL Slayer without any post-processing will do) and Guitar Rig 5. Guitar Rig 5's demo has enough functionality to distort a guitar sound real good.

The reason behind going straight through geometry is that triangles are infinitely thin. The physics engine isn't aware of the "volume" of the mesh, so of course it's gonna screw up the collision at high velocities. You can think of it like treating each triangle as a separate physics object, completely disregarding the big picture. If it worked flawlessly, taking into account the volume of a concave mesh, it'd be very slow. xD

Generally, what people do in that situation is make a dedicated group of convex collision meshes (e.g. a table would have 1 wide rectangular prism, and 4 thin cylinders for collision), in which case it's easier for the physics engine to process it and it's aware of the volume. Dunno how that one works in Unity, but at least you can use a bunch of box & cylinder colliders to approximate the mesh.

Admer456
Commented 1 week ago2020-10-15 17:00:20 UTC in journal: Unity Game Dev. Comment #102955
While I don't have any significant experience with Unity (not to say I didn't try it out), I can tell you about modern engines in general: I think you made a nice choice if you haven't messed with programming before. C# is easier and forgiving compared to C++.
At some point, you might also wanna try out Godot which also supports C# (alternatively, it offers its own scripting language GDScript), and there's a TrenchBroom plugin for it to directly import TrenchBroom maps or something.

I, personally, occasionally experiment with Unigine 2 and CryEngine 5, which are big behemoths (but still perform better and run better than UE4 AHAHAHA), and otherwise I work with idTech 3 (Quake 3 engine) and idTech 4 (Doom 3 engine), with which I've done some more significant progress.
Though, I'm also planning to do some stuff in Unity and Godot.

Admer456
Commented 2 months ago2020-08-07 11:02:25 UTC in wiki page: Explanation: Why brushes can't be concave Comment #102858
I think it's a combination of both, Captain P. A combination of space saving and being easy to parse by the compilers. Also, normal + offset would increase loading times in a map editor while opening a .map file, I imagine. ^^

And don't worry, your English is pretty good. In fact, you will learn even more of it, if you talk more on the forums.

Admer456
Commented 4 months ago2020-06-23 12:57:21 UTC in journal: Bye Internet Explorer Comment #102770
Thing is, nowadays most people want things to look beautiful, and the technology behind that is way below optimal in terms of performance.
Also, JavaScript. A language that got hacked together in two weeks and had nothing to do with Java itself, but was named like that because it'd get popular that way. Curse JavaScript. It is why I avoid web development and will always avoid it, until the day when I can do both the frontend and backend entirely in something like C.

And the thing is, then you got a wave of developers thinking "oh, hardware is getting better and better, we don't have to worry about making things run that well on current hardware", but also developers who are there for the money, which is basically the same thing as you've just said.

In the real world, the average user of a website cares if it works and it's a plus if it looks good. In March, when some company launched an online school platform in Bosnia, the only thing our teachers would say, whenever the website went down, or whenever there was an error, is "it doesn't work", "it's broken" and such. They didn't know how much RAM their browser was occupying when that website was loaded and didn't care, because the only other program they had opened at the time was probably Zoom or a browser tab in Facebook.

I think most of them (web developers and browser developers) will never care about people like us.

"it takes a few hundred MB ram to display a simple html page. What is this madness?"

The fact that bad web developers exist also doesn't make things any better. Penguinboy is, of course, a big exception otherwise TWHL4 (and TWHL3) wouldn't exist in any good shape.

"Back in the day the entire OS would run on 256MB just fine and youtube on top of that."

Way back in the day, an entire OS and browser could run on 64MB and YouTube didn't exist. A decade before that, you could connect to a mainframe with your terminal which had 64KB of RAM. Where's your point?

Back in the day, I had a 2007 laptop with just 2GB of RAM and it ran Firefox fine. This is 2020 and frankly, a few hundred MB isn't much. Save up some money, upgrade your system, what else can I tell you? Or, program your own browser and make it the most lightweight thing ever. All webpages are gonna look like they're from 1995, lmao.

Admer456
Commented 4 months ago2020-06-22 16:49:52 UTC in journal: Bye Internet Explorer Comment #102765
On Chrome, all downloads seem to fail for me, lol.
I used Vivaldi for a while, which was cool but then YouTube broke while it worked on other browsers fine. Unacceptable. Downloads also stopped showing after a while and I had to clear my download list.
Never used Edge, never will. Same goes for Opera, Safari etc.
Privacy is something I don't really care about. I'm 100% fine with companies knowing everything about me, so I ain't gonna judge any browser by privacy-related things.

So yeah, that statement of yours is mostly invalid.

Guess how old he was when he wrote the one about vectors.
14, you can find it in the Web Archive copy of the "Vectors: An introduction" page, in the comments

That's not the point though. It was a sort of a revolutionary time for HL modding IMO. People were discovering vertex and pixel shaders, some were already integrating Cg into their Half-Life mods, people were learning about new graphics techniques and concepts which new games were about to take advantage of (e.g. normal mapping), some folks were experimenting with integrating physics engines into HL, Paranoia started development, HL SDK 2.3 got released with a certain change that I really like about it, and so on.

His articles are a living documentation of that time period and every time I read "Vertex and pixel shaders", I'd imagine how it used to be back in 2003 when a lot of that was an alien concept among us modders. Now, a lot of people know about shaders and physics engines, for example. In fact, the Blinn-Phong shading model is old news by now. We got Physically Based Rendering.

The early 2000s also saw the development of vehicles for HL mods, such as this beautiful example:But why didn't we see any of that? Why didn't we get to play any of that, even? God knows.
And that's what I wanna change.

I want to bring back some golden times, to carry one of the torches of HL modding. Don't get me wrong, HL modding is amazing, especially in this day and age where we can compile maps in minutes and people are still interested. But, I got a vision that HL modding can be far better than it is now. Which is why I started the Advanced Development Mod project.

"I wish I had done as much as you do at your age."

There are countless things I wish I had done earlier too, to be honest.
5 years ago, I made the mistake of starting to make a total conversion mod instead of deciding to learn the skills first and whatnot. Though, I gotta say, it was a good mistake. I wouldn't be doing these projects otherwise.
I wish I started doing C++ stuff at least 2 years earlier, you know. But, when you think about it, maybe it's a good thing that I started it 2 years ago than 4 years ago. Cuz' those 2 years in between helped me improve my mapping skills, as well as texturing and music skills.

I think everything has its reason, even though when we think something should've been better done earlier. Sometimes, it's true, we SHOULD have done some things earlier, but at other times, maybe it was for the better, because something else happened and it was a good thing.
You get what I'm trying to say.

"the world won't stop and knowledge keeps passing on."

Always gotta carry that torch. It's one of the reasons why I write tutorials.

What projects are you guys getting up to whilst isolating?

Meh, not much, trying to get some work done on my idTech 4 game, maybe I'll port a couple of tutorials from GameBanana to TWHL too.

Since I'm in a village and pretty much nobody is visiting us, the chance of getting infected is a bit lower here, but despite that, I'm still a worried for my grandma and my parents. Especially my grandma.

And since I get to stay at home more, I decided to use the bike a bit more often.

I remember when TJB once surprised me for my birthday, roughly a month after said birthday. So better late than never!

Commented 7 months ago2020-03-08 10:08:25 UTC in vault item: Razorback Comment #102571
Neat colour palette, calm and cozy atmosphere, a couple of cool little things like crystals and some steam that harms you, and pretty fun to play. O.o

So good that it crashed my game when ribcage whacked me with a crowbar. Amazing.
This comment was made on an article that has been deleted.

It does carry a certain message and even a whole story behind it, though, but that's up to others to figure out one day. 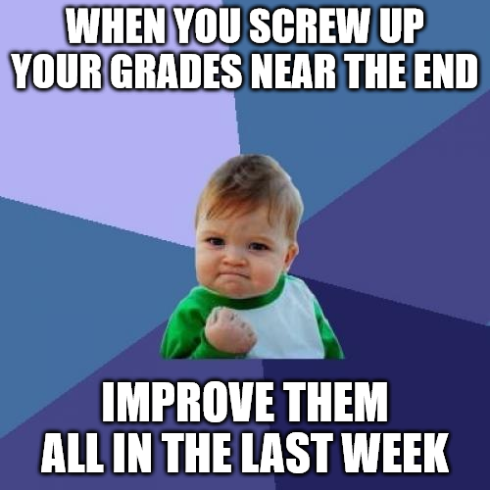 Funny thing is, it's just the first semester. I still got stuff from February to June.

), currently in the 3rd year.
I plan to go to college after it, just so I can get some extra time to work on projects, so I can hopefully build up a portfolio over time.

Anyway: today I improved my Electronics score, fixing my GPA from 4.47 to 4.53.
LET THE WORLD KNOW, ADMER BELIEVES IN GOD AGAIN!