While this isn't directly part of the engine, some entity classes have been implemented: 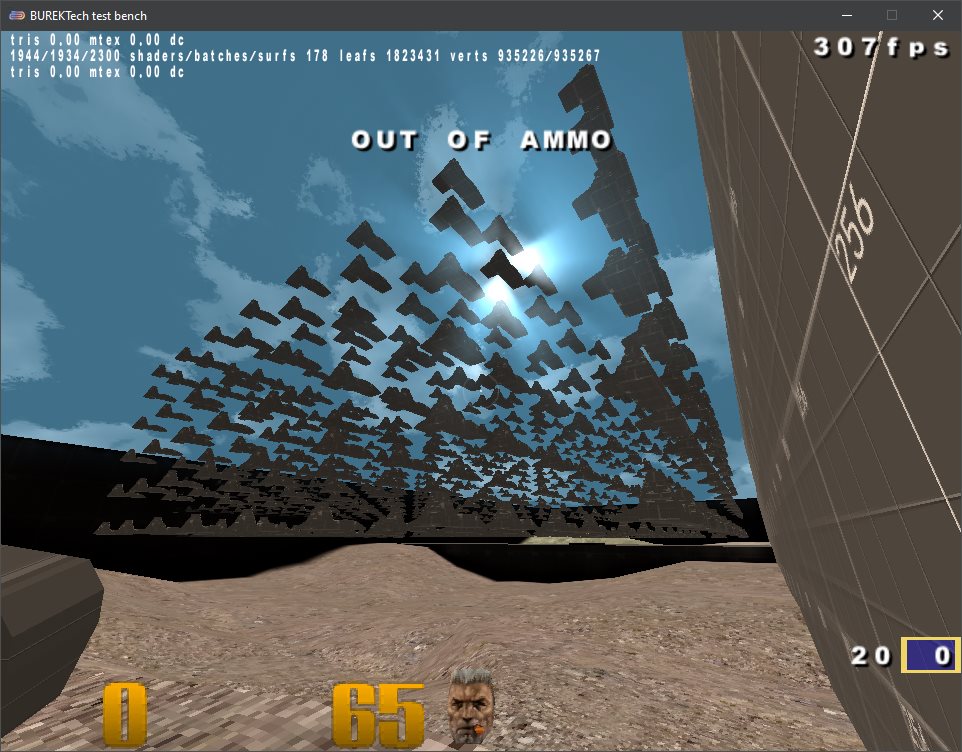 960 entities being rendered, approx. 460k tris + 600 world tris + 50 viewmodel tris
I've upped several limits now. Max visible entities are now 1024, max models are 1024, max sounds are also 1024 for now. Each of these were 256. Max brush models are thus also raised to 1024, I believe. Nonetheless, these limits are very easy to raise. It's just a matter of choosing sensible values, and for now, it's perfectly enough for me.

While I was implementing and testing func_bobbing, I noticed a really bizarre bug with player movement. On the clientside, the player would "detect" the moving entity fine, and try to move along with it. But on the server, that wouldn't happen. Ultimately, the answer was somewhere in the serverside collision code.
Solid entities need to have an absolute bounding box defined in order to be taken into consideration when clipping against. My entity's abs bbox wasn't being correctly set up due to its origin. Quite an unusual thing. I decided to name it Stupid Mover Bug, inspired by the Stupid Quake Bug.

Ah yes, I've FINALLY managed to clone gtkRadiant just to get its q3map2 compiler. It's cleanly written for the most part and it's not too complex for a compiler. Miles cleaner than VHLT, although I guess its light stage could use some neat things from VHLT...
The first thing I've done was adding Valve 220 support, mostly copied from XaeroX's J.A.C.K. version of q3map2. The difference is, It's a compile parameter now, -valve220. This makes it easier for us TrenchBroom users who like the Valve 220 format. Until TB gets patch support and brush primitives, it'll mostly stay this way.

Some other features I'd add to the compiler in the future include:

Near the end of December, I found out idTech 3 supports multiple instances on a single machine, which is AMAZING for basic multiplayer testing. This way, I can ensure co-op and deathmatch work. Coming from GoldSRC, this feels like discovering alien technology.

So, I was quite... saddened... to find out that you can't just place a point entity in the map, assign a model to it and an animation number, and expect it to animate. On the other hand, I was relieved to find out that idTech 3's animation system is literally 3 variables: frame, oldframe and backlerp. This is on the client. On the serverside, it's only one: frame.
I decided to add a couple of variables: animationFlags will be a nice way of telling the renderer "Hey, I wanna handle animation manually, i.e. I wish to increment frames on the server", or "Hey, I want this to be looped".
Right now, models will only support monolithic animations, but in the future, they will support up to 4 animation channels. For example, the torso plays one animation, and the legs play another.

Several things. First, I need to remove every single mention of gentity_t, since all code related to it is dead, i.e. won't ever be executed. It just makes compile times unnecessarily longer.
Second, I need to finish writing the entity classes. I still haven't written func_ladder, func_breakable, func_train and so on.
Third, I need to implement the animation system.

What's left for the (far) future?

A TON of things. Some of these will make it to 0.2, some will be in 0.3, some won't be until 0.5.
Right now, however, I'm working on a game demo with this. It will be in a different repository, once released, and various features will be ported.

Edit: SMH I should really make a blog somewhere

We're slowly going to be adding more to feature our unique maps. If you have any recommendations, chuck 'em in the comments here.

We probably won't be doing too many so people aren't forever loading new ones, but what would you say are the must haves?

In my last journal, "GoldSRC + Godot = ???", I wrote about the idea of a game engine/framework built on top of Godot, that aims to have a workflow very similar to GoldSRC. You can map for it with J.A.C.K., TrenchBroom, or even Hammer in theory, AND sell games made with it. Then I stopped working on that and moved back to my ioquake3 fork, BurekTech. Same idea, different engine.

WE SQUASHED THEM BUGS
3 big issues were closed this month, pushing the completion from 11% to 29%. I ported a good chunk of the game code from C/idTech 3 way to C++/BurekTech way.
What this means is, instead of a bunch of global functions and structs, I now have some classes responsible for the game logic (entity spawning, for example), as well as some entity classes. So I didn't just rename all .c files to .cpp and fix the compile errors. 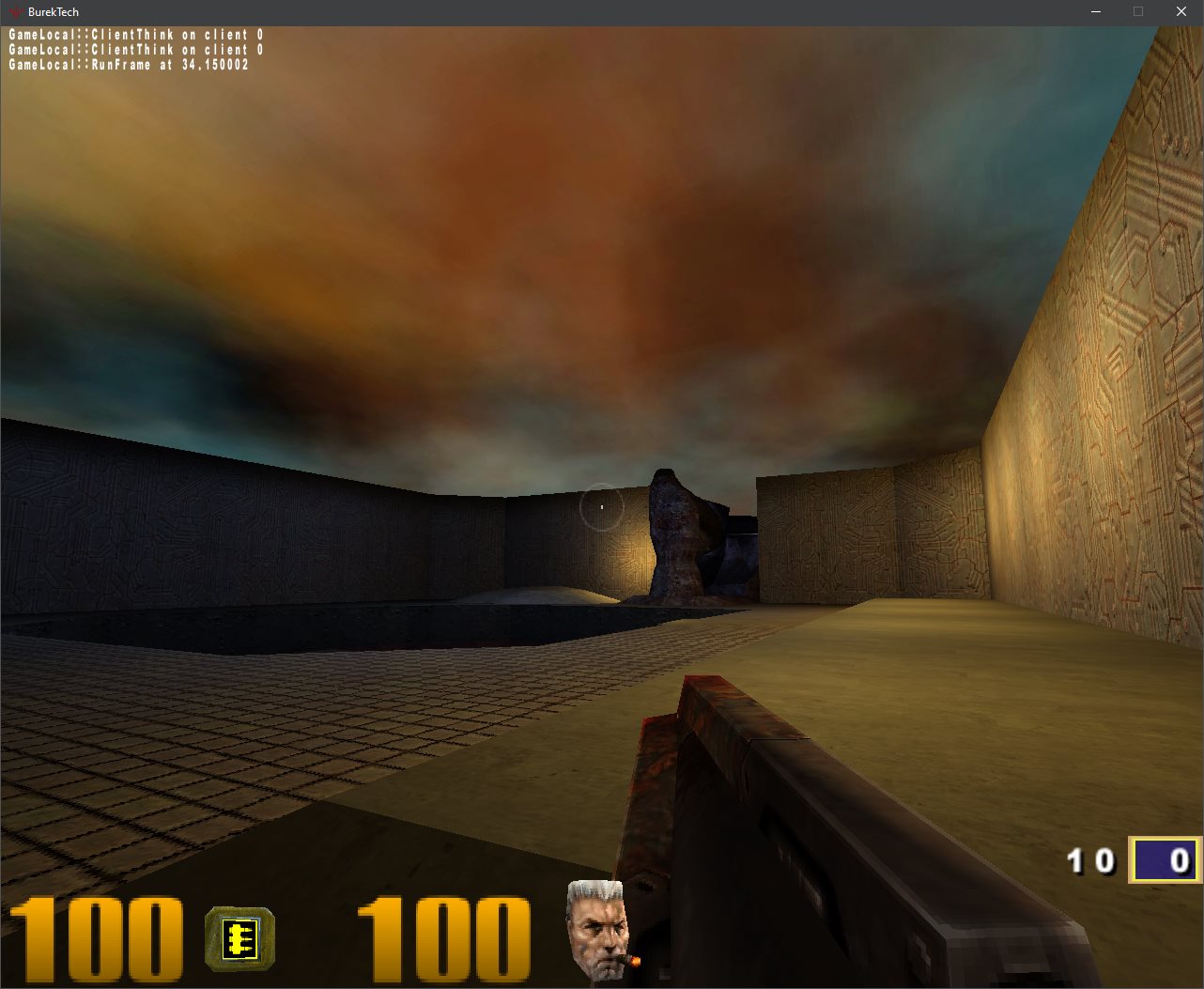 Looks like a ghost town when no entities are 'round
After all the remaining required functionality is ported (spawning temp entities, selecting a spawnpoint (the player spawns at 0,0,0 at the moment), making sure MP works), the next step is to re-implement some important trigger_, func_ and info_ entities. Then write some utilities, like for gib spawning; a basic AI for NPCs (the Q3 bot code is big, no way I'm porting that soon D:); and, maybe not immediately, a save-load system.

Another concept I had was entity semi-components, but certainly won't be in version 0.1. 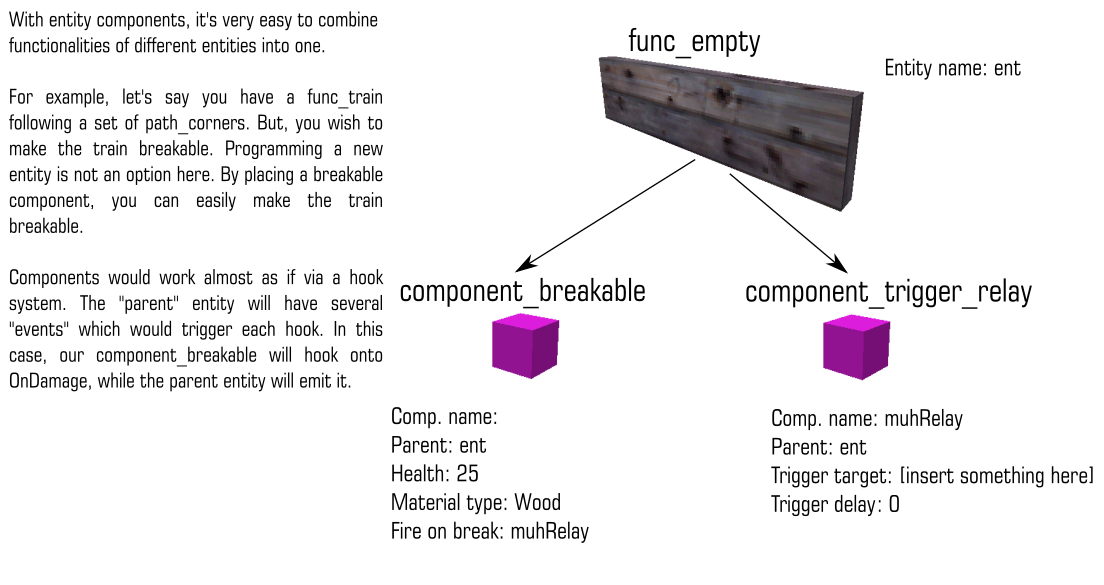 BurekTech is not really an engine IMO, since most of the work is done in the game library. It's not an engine-agnostic game framework either. It's like... a game base? I dunno.
With that said, BurekTech 2.0 should be initially based on a different engine like Godot (partially due to licencing), most likely as a plugin. The idea is still gonna be the same. The folder structure is still gonna be (largely) the same. You get the point.

Anyway, I hope that BurekTech will be ready enough by the end of December, so I can start making a game in January. Or in February. It's gonna be a medium-paced retro FPS, set in 2033 Bosnia. I might post a few screenshots in the WiP screenshots thread.

If you want to help Please send me a PM 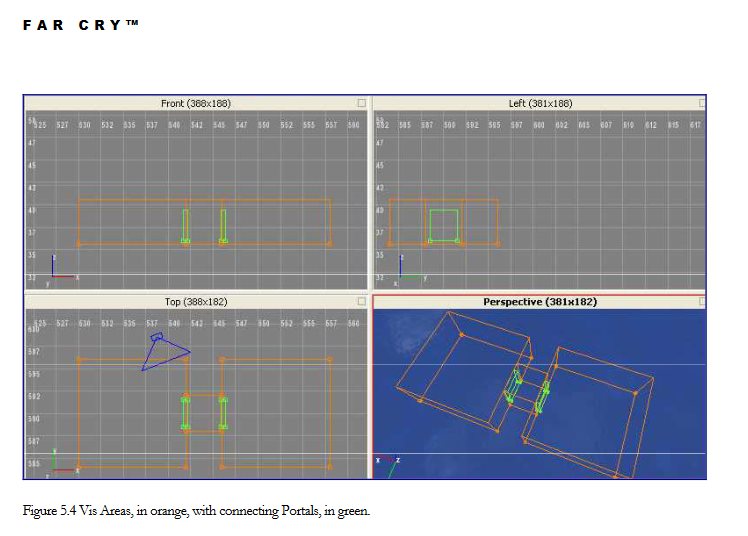 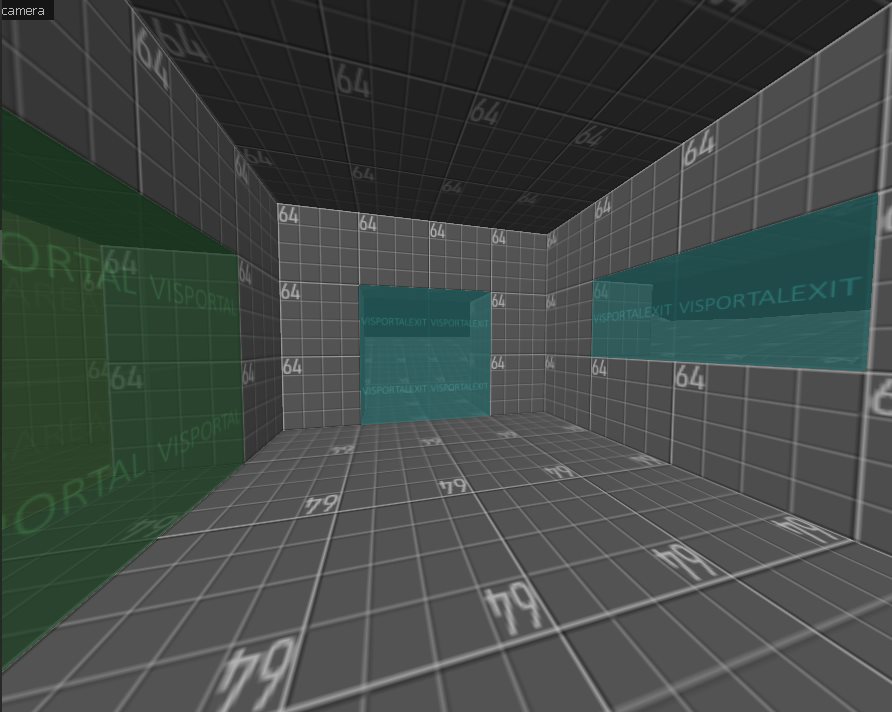 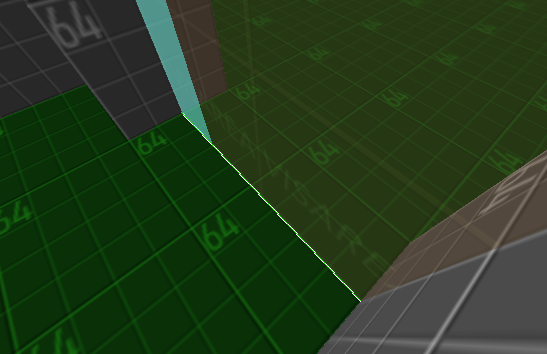 And Im gonna actually do some modelling!

I've been messing with Unity and learning C# in my spare time.

I want to make very simple 2D games and have already started a simple platformer.

So far i've programmed my character to respond to the arrow keys and move side to side and jump. He also plays his idle and walk animations. I did so by following along tutorials on YouTube but took a step back to run through tutorials on C# in general. It's a huge beast to understand for someone like me but i'm very slowly beginning to understand the fundamentals.

Does anyone here have experience in Unity?

What I'm doing with Game Development
VeryCoolMoment • 2 years ago2020-10-10 20:02:28 UTC • 4 comments
I am currently working on a Multiplayer Game inside Unreal Engine 4 (Yes I could be using Unity or Even Source but I will get too that Later Future Journal post?)

A quarter dollar in USD

I put Ovaltine in my Eggnog
Rimrook • 2 years ago2020-10-04 12:16:55 UTC • 7 comments
One time I actually did put Ovaltine in eggnog. Ovaltine is a type of chocolate mix full of vitamins for those who don’t know what it is. So I drank an incredibly dense shake of the stuff. Needless to say I didn’t eat the rest of day. It tasted interesting to say the least.

Is it a bird? Is it a plane?
Archie • 2 years ago2020-09-01 18:25:33 UTC • 11 comments
No, it's the trials and tribulations of some of the worst z-list heroes ever to grace our planet. The English language has a crutch in the form of adding ', man' to the end of sentences (e.g. 'it's really cold, man!') We remove the comma, and the resulting terrible superhero (Really Cold Man) is put through their paces by the literary genius of four morons with a combined writing experience of 'some'. It's stupid, it's funny, it flies off the rails far too regularly. It's The Worst Superheroes podcast.

Urby, AJ, Scoots and myself have been sitting on this for like three years, and I figured we really should get round to releasing them. Look forward to an episode every fortnight.

Ep1 is a bit shit, but by ep3 I'm legit convinced we're onto a winner. Give it a listen and let us know what you think

So, I worked with chlorine yesterday...
Draeger • 2 years ago2020-08-30 13:37:51 UTC • 4 comments
Yesterday, I decided to make some chlorine and try and ignite some iron. So I got my bleach and my hydrochloric acid and filled 100ml of chlorine bleach into a beaker. Then I dropped some hydrochloric acid into the bleach. It exothermically reacted to evolve chlorine gas.
NaClO + 2 HCl → NaCl + H₂O + Cl₂

Then I took a piece of iron wire in tongs and heated it with a handheld burner until it glowed bright white. Then I held it into the beaker. Red smoke started coming off of the iron.
2 Fe + 3 Cl₂ → 2 FeCl₃
The red smoke was subliming (turning to gas without melting first) iron(III) chloride.

By the way, chlorine smells like salad at lower concentrations. At higher ones, it smells like someone shoving a plate of salad into your face. It also looks like salad gas. The salad element. Also I have a fume hood so I took no damage except that it wasn't strong enough so the house smelled like chlorine, but it was still a safe concentration. The odor threshold of chlorine is 0.002 parts per million, and immediately dangerous dose is 10 parts per million.