Now that weapons and entities in general are covered, we may explore another kind of entities: monsters.

Monsters, or NPCs (acronym for "Non-Player Character"), are some of the most difficult entities to program because they have to behave in a certain way to make a game fun. Artificial Intelligence ("AI") is the component responsible for manipulating that behavior.

We will explore in this page the concepts of Half-Life's AI before we get to create a monster itself. AI and monsters programming always happen in the server project, you will likely never touch the client project. For the sake of clarity, important terminology is in bold.

Let us do the same thing as we did for the weapons: look at the class declaration of scientist (CScientist), the human grunt (CHGrunt) and the headcrab (CHeadcrab) and determine the class hierarchy.

The reasons we are looking at those three monsters is that they have distinct traits: one is a "simple" monster, another one is a talkative friend and the last one has the ability to be part and communicate within a squad.

With the knowledge and experience you gained in the previous chapters of this book and/or from looking at the HL SDK by yourself, you should be able to do this on your own.

Need some help? The files you should be looking at are scientist.cpp, hgrunt.cpp and headcrab.cpp. Some IDEs like Visual Studio on Windows provide a "class viewer" to navigate through classes rather than files and this could help you when navigating through the code.

Have you finished? Here is the class hierarchy you should have found: If you found the correct hierarchy, congratulations! If not, do not get discouraged, learn from your mistakes and try again, that's how you gain knowledge and experience.

We can determine that those three monsters use three different bases:
Did you know?
The player (CBasePlayer in player.h) is also a "monster", since its class is based on CBaseMonster.

It may be weird, but if you think about it, players and monsters share some traits like bleeding, dying, moving, attacking, vulnerability to attacks and so on.

This means that a monster does not always involves an AI. For those who are familiar with Unreal Engine 4: this is a bit like having an APlayerController or AAIController possessing an ACharacter (or anything derived from APawn).

Everything has its beginning

Whenever a monster spawns through Spawn(), a call to MonsterInit() is made which is responsible for checking if the monster is allowed to spawn using the returned value of BOOL CGameRules::FAllowMonsters() which returns TRUE or FALSE depending on the game rules implementation used in g_pGameRules.

The monster remove itself immediately if that is not the case. Otherwise, it initialize some variables which some of them are described in this page.

That same method make a call to StartMonster() which is more interesting because it initialize the monster's "thinking" to MonsterThink() creating a loop of calls to RunAI() until the monster dies (IsAlive() returns FALSE).

RunAI() has several responsibilities such as: These functions are responsible of toggling on and off condition bits of the monster.

You might have seen in the code of monsters constants like bits_COND_LIGHT_DAMAGE. Those are condition bits. They are used as a way to give information to the AI like "this monster has taken light damage".

They are either disabled or enabled in the monster's m_afConditions attribute. This is done through bitwise operation using the OR operator (|).

In the previous section, we said that several methods such as Look() and GetEnemy() toggle on and/or off these condition bits. Look() handles all condition bits that involve vision, such as bits_COND_SEE_FEAR which means "I see an enemy that I'm afraid of".

Here is a list of condition bits common to all monsters, however, keep in mind that a monster may use its own (schedule.h):
Watch out for the gaps in the values
The constant using the value (1 << 14) is commented and not implemented which is why it is not present in the table above.

According to that comment, it was supposed to be a third kind of ranged attack (bits_COND_CAN_RANGE_ATTACK3).

Likewise, there is no constants between (1 << 23) and (1 << 27).
It is worth mentioning that bits_COND_ALL_SPECIAL exists and is a shortcut to include both special conditions ((bits_COND_SPECIAL1 | bits_COND_SPECIAL2)).

These are common methods used to handle condition bits with an added description of what they do:

The purpose of the Listen() method (called by RunAI()) is to make the monster hear sounds it could be interested in and classify them using sound bits such as bits_COND_HEAR_DANGER, meaning "I heard a dangerous sound". They work in the same way as condition bits.
What is that stench?
You likely know that monsters can "smell" and react to it like Barney. Scientists will comment on bad scents and bullsquids can eat headcrab carcasses.

Valve made the choice of bolting the "smell system" onto the sound stuff, because they kinda work the same way and it was easy to implement it that way, hence why this is also done in Listen().
Here is a table of common sound bits (and "smell bits") and what they mean (soundent.h): Likewise, remember that monsters may use their own.

One particular method to note here is int ISoundMask() which returns all the bits that the monster should care about that could influence its behavior. There is also BOOL CSound::FIsSound() and BOOL CSound::FIsScent() to distinguish between sound and smell bits.

You also might have seen calls to CSoundEnt::InsertSound( int iType, const Vector &vecOrigin, int iVolume, float flDuration ) in various places of the HL SDK that is used to insert sounds (and smells) in the world for monsters to notice.

All monsters have a m_afMemory attribute which acts as memory for the monster to remember various events. They also work like condition and sound/smell bits.

Again, here is a table of common memory bits (monsters.h): You probably guessed already: monsters may have their own as well.

Barney is going to help us demonstrate the usage of memory for monsters: if he is not in combat and you hurt him, he's going to remember that you provoked him (bits_MEMORY_PROVOKED) making him stopping following you and try to kill you.

If he is in combat and you "accidentally" hurt him, he is going to get suspicious of you (bits_MEMORY_SUSPICIOUS) and remind you he's a friendly. If you do it again, he will get provoked (bits_MEMORY_PROVOKED) and you already know what is going to happen.

As usual, there are methods to manipulate all of this (with added description):

A capability basically describes what a monster can and can't do. It is stored in the m_afCapability attribute and works the same as the other kinds of bits.

Here is a table of the common ones (cbase.h): Again, a monster might have its own capabilities. There is also bits_CAP_DOORS_GROUP available that is a shortcut for bits_CAP_USE, bits_CAP_AUTO_DOORS and bits_CAP_OPEN_DOORS together.

However, there are no methods to manipulate those. You basically set m_afCapability in the monster's Spawn() method. If for some reason you need to query if the monster is capable of something, you check directly if its bit is set (if ( m_afCapability & bits_CAP_SOMETHING )).

All monsters have a monster state stored in m_monsterState generally describing their current state.

That state impacts several things such as task and schedule selection, some generic behavior, behavior when performing scripted events ((ai)scripted_sequence) and so on.

Here is a table of possible states and what they mean (util.h):

An activity allows tying sequences/animations in the model (MDL) to an action in the game code like idling, running, walking and so on.

It is important to note that activities are tied to an index through an "activity map" (activitymap.h). Here is a list of common activities (activity.h):
We have an intruder
ACT_RESET is the only activity that is not part of the activity map due to its special behavior.
Surprisingly, no monsters have their own activities.

It is possible to have multiple sequences/animations tied to a same activity. In that scenario, the algorithm for choosing a sequence (simplified) is: A use case for this is choosing a random idle sequence/animation from three possible choices whenever a monster is idling.

All monsters have three attributes named m_Activity, m_IdealActivity and m_movementActivity. They indicate the current activity, ideal next one and the one to use for movement respectively. For methods, there are SetActivity( Activity newActivity ) and Stop() that you might find useful.
It is very dangerous to manipulate activities
They are common to all monsters, so if, for whatever reason, you need to add, edit and delete any of them, do it with extreme caution.

You have to treat them and the activity map in the same way you would treat an "exposed C++ interface". If you add a new activity in the middle of the map for example, you will break all monsters unless you update everything including all monsters MDL files. The same applies for deleting an entry and/or changing the order in the map.

Updating the game code will not be enough, you will also be required to build and use a custom version of StudioMDL, the tool to compile QC files into MDLs. If you do not do that, StudioMDL will not be "aware" of the changes you made.

In a nutshell, making any change to activities and the activity map is "extraordinary", only do it if you really think it is really worth it and if you are aware of the consequences.

A model can contain events allowing the entity using the model to execute specific things, such as showing a muzzle flash, playing a sound and more. For monsters, it is a way to communicate with the game code and it is an important aspect to consider.

If you look at the scientist model (models/scientist.mdl), more specifically the give_shot animation, we can see some valuable information: there is a tie to the ACT_MELEE_ATTACK1 activity and there is one animation event tied to this sequence/animation. If we look at the event's information, it is triggered on the 17th frame and has the ID #1.
Wait, "ACT_MELEE_ATTACK1" for giving a syringe shot?
Yes, the name of the activity does not always match the real context of the sequence/animation.

The reason for this and you probably have guessed it is because of activities. Why would you risk breaking all monsters because you added an extra activity (and updated the activity map) only to match the context of a single action for only one kind of monster instead of using an existing activity that the same monster isn't already using?

So do not be surprised if you see things like ACT_EAT being used for a sequence/animation that does not involves "eating".
HandleAnimEvent( MonsterEvent_t *pEvent ) is the method responsible for handling animation events. If we look at the scientist's version, we can see this code: Taking again our event as an example, it will call HandleAnimEvent( MonsterEvent_t *pEvent ) with a value of "1" for pEvent->event thus calling Heal() to heal the player (if conditions are still met). You can also note that there are animation events to show and hide the syringe itself as well. Other examples includes shooting firearms, shooting projectiles, throwing grenades.

Animation events may be common to several entities or specific to a particular one.

There are other attributes common to all monsters that are not mentioned (yet for some of them) in this page. However, they do deserve to be known but they don't need a dedicated section to explain what they actually do.

Here is a table of some of them (basemonster.h):

This page has a lot of information to digest so you might want a recap of everything we have seen so far: Here is also a simplified flow chart of the lifecycle of a monster: 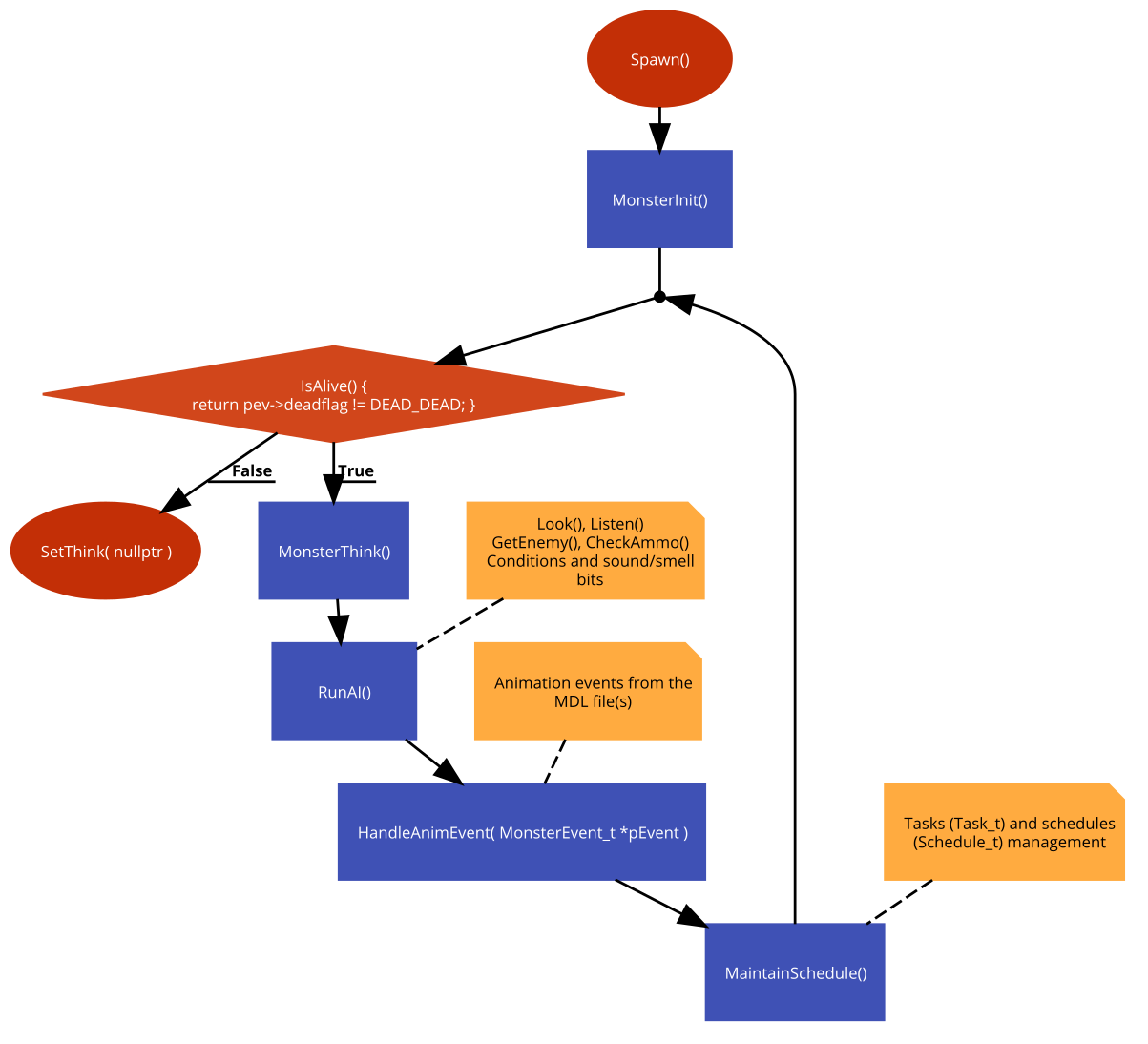